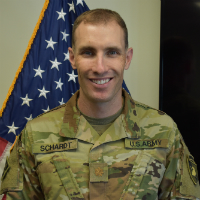 Maj. Matt Schardt serves as the Executive Officer of the Modern War Institute and teaches DS 455, Comparative Defense Policy. Commissioned as an armor officer in 2006, Matt has served in Stryker, Infantry, and Armored formations in Hawaii, Colorado, and Kansas. Maj. Schardt has also served as an Army Congressional Fellow and served as an Army Legislative Liaison to the US House of Representatives. Maj. Schardt’s most recent assignment was as Brigade Operations Officer for 2nd Brigade, 1st Infantry Division at Fort Riley, Kansas. Matt has deployed in support of Operation Iraqi Freedom, Operation Enduring Freedom, and Atlantic Resolve. He has a bachelor’s degree in Human Geography from the United States Military Academy and a Master of Professional Studies in Legislative Affairs from the George Washington University.