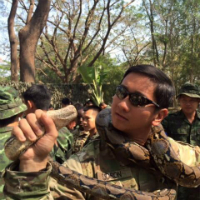 Maj. Noel Sioson currently serves as the deputy director of the Modern War Institute. He received his commission in the Army as an armor officer from West Point in 2004. After Armor OBC, he reported to 1st Brigade, 25th Infantry Division at Fort Lewis, Washington and immediately deployed in support of OIF III as a rifle platoon leader in 1st Battalion, 5th Infantry Regiment. After Iraq, Maj. Sioson served as HHC XO and took part in the brigade’s move to Vilseck, Germany as the newly reflagged 2nd Cavalry Regiment in 2006. Maj. Sioson concluded his tour in Germany as 1st Squadron’s rear detachment commander in support of the unit’s return to OIF from 2007 to 2008.

After graduating from the Special Forces Qualification Course in 2010, Maj. Sioson assumed command of ODA 1215 and immediately deployed in support of OEF-P from 2010 to 2011. Following OEF-P, ODA 1215 conducted Baker Piston 11-2 and then deployed in support of OEF-A XVIII in 2012. Maj. Sioson redeployed to serve as the assistant S-3 for 2nd Battalion and returned to Afghanistan as the JOC director for the battalion’s rotation as SOTF-Southwest during OEF-A XX in 2013. Afterwards, he attended the Naval Postgraduate School and earned a master of science degree in defense analysis.

Following NPS, Maj. Sioson commanded AOB 1110 and served as the strategic planner for Thailand, Malaysia, and the Philippines. While in command, he executed multiple missions and campaign activities in Thailand, Korea, and the Philippines, serving as the CJSOTF commander of more than four hundred Filipino, Australian, and American special operations forces during Balikatan 17. Most recently, he served as Amnassador Sung Y. Kim’s senior adviser on US special operations in the Philippines and simultaneously commanded TF 511.1, a joint, conventional-SOF task force focused on counterterrorism objectives in the Philippines.