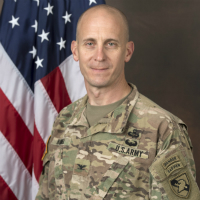 Col. Patrick Howell the Director of the Modern War Institute at West Point. Heis a career Engineer officer as well as Strategic/Operational Planner and is currently a Chief of Staff of the Army Advanced Strategic Plans & Policy Program Fellow. He has served in a variety of conventional and special operations assignments and has conducted multiple deployments to Afghanistan, Iraq, and Eastern Africa. He has graduated from several military courses including Ranger School and the School of Advanced Military Studies. Prior to assuming his current position as the Director of MWI, Patrick served as the lead Strategic Planner at the Joint Special Operations Command, Battalion Commander, and an Assistant Professor of International Relations in the Department of Social Sciences at the United States Military Academy. He has taught courses in International Relations, Comparative Politics, Politics & Government of Europe, and Central European Security Studies. He has a bachelor’s degree in International Relations from the United States Military Academy, Master of Arts in Law & Diplomacy from the Fletcher School of Law & Diplomacy, Master of Military Arts & Science from the School of Advanced Military Studies, and PhD in Political Science from Duke University.