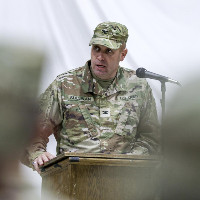 A 1996 ROTC Distinguished Military Graduate, he holds a bachelor of science in civil engineering from Duke University, a master of science in applied and interdisciplinary mathematics from the University of Michigan, a master of defense studies from the Royal Military College of Canada, and a master of strategic studies from the United States Army War College, where he was a distinguished graduate and won the Commandant’s Award for Distinction in Research. He is a PhD candidate in the Royal Military College of Canada’s War Studies Program and expects to complete his dissertation in summer of 2022.