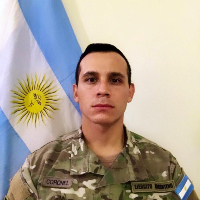 Captain Rodrigo Andres Coronel graduated from Liceo Militar “General San Martin” in 2008 as an infantry reserve second lieutenant with a diploma oriented to the social sciences. In 2009, he enrolled in the Colegio Militar de la Nacioñ and graduated as a second lieutenant in 2012. Commissioned as a cavalry officer, he attended the Escuela de Caballería the next year. His first assignment was at the Exploration Cavalry Regiment 4, Mountain Brigade 6, in San Martin de los Andes, Neuquén, where he served as a cavalry platoon leader and executive officer from 2013–2016. Afterwards, he was assigned to the Escuela de Suboficiales “Sargento Cabral” in Campo de Mayo, Buenos Aires. There, he was an instructor for the prospective noncommissioned officers between 20172019. While attending an English course at the Army Language Center, he was sent to the Colegio Militar de la Nacioñas an assistant to the operations officer of the Department of Military Instruction, where all the matters regarding the cadets are planned and organized. During his military career, he has acquired specific skills such as mountain climbing and ski instructor, safety and rescue in mountain accidents, and parachuting. He holds a bachelor’s degree in Operational Management. He is married to Noelia Duarte and has no children.