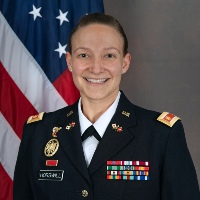 Maj. Rose Horswill grew up in Wyoming, Rhode Island, and commissioned from USMA in 2010 as a signal corps officer. Her first assignment was to Joint Base Elmendorf-Richardson, Alaska, where she was a platoon leader, company executive officer, and the company commander for C/307th Joint/Area Signal Company. She was also the assistant operations officer for the installation network enterprise center. She deployed to Afghanistan in 2014 as a cultural support team leader with 3rd Special Forces Group (Airborne). She then attended the Signal Captain’s Career Course and became a battalion signals officer in the combat aviation brigade at Fort Bliss, Texas.  While at Fort Bliss, she commanded the 261st Signal Company and later deployed with the 1st Armored Division to Iraq from 2017 to 2018 as the Deputy Secretary of the Joint Staff.

Upon redeployment, she attended graduate school at the University of North Carolina at Chapel Hill, where she earned her MA in history and became a PhD candidate.  She currently instructs military history at West Point, where she lives with her husband Nate and daughter Cecilia.