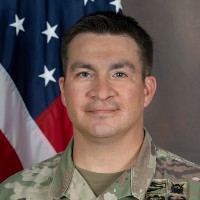 Lt. Col. Thomas R. Church is the deputy director of the Modern War Institute at West Point. He is also the course director for DS475 Strategic Decision Making and an instructor for DS350 Persuasive Communications.

A career infantry officer, he has served in multiple positions deployed and in garrison from platoon leader to strategic plans officer including thirty-seven months in support of Operations Enduring Freedom, Freedom Sentinel, and Resolute Support in Afghanistan. As a lieutenant, he was a rifle platoon leader and company executive officer in 2-87th Infantry, 3rd Brigade, 10th Mountain Division. He was then a Ranger instructor and the battalion adjutant for 6th Ranger Training Battalion at Camp James E. Rudder, Eglin Air Force Base, Florida, prior to taking command of Company B, 2-2nd Infantry, 3rd Brigade, 1st Infantry Division. As a major, he served as a small arms analyst at the National Ground Intelligence Center, the squadron executive officer for 3rd Squadron, 3rd Cavalry Regiment, and the regiment operations officer for the 3rd Cavalry Regiment at Fort Hood, Texas. His last assignment before instructing at West Point was as the lead joint deliberate plans officer for United States Special Operations Command—Europe.

Lt. Col. Church holds a bachelor of arts in history from the University of Michigan and a master of military arts and science from the School of Advanced Military Studies at the Command and General Staff College in Fort Leavenworth, Kansas. He is a graduate of the Infantry Officer Basic Course, the Maneuver Captain’s Career Course, and the Command and General Staff College School, School of Advanced Military Studies. LTC Church has also graduated from the US Army Airborne School, Air Assault School, Ranger School, and Special Operations Combat Diver Qualification Course.