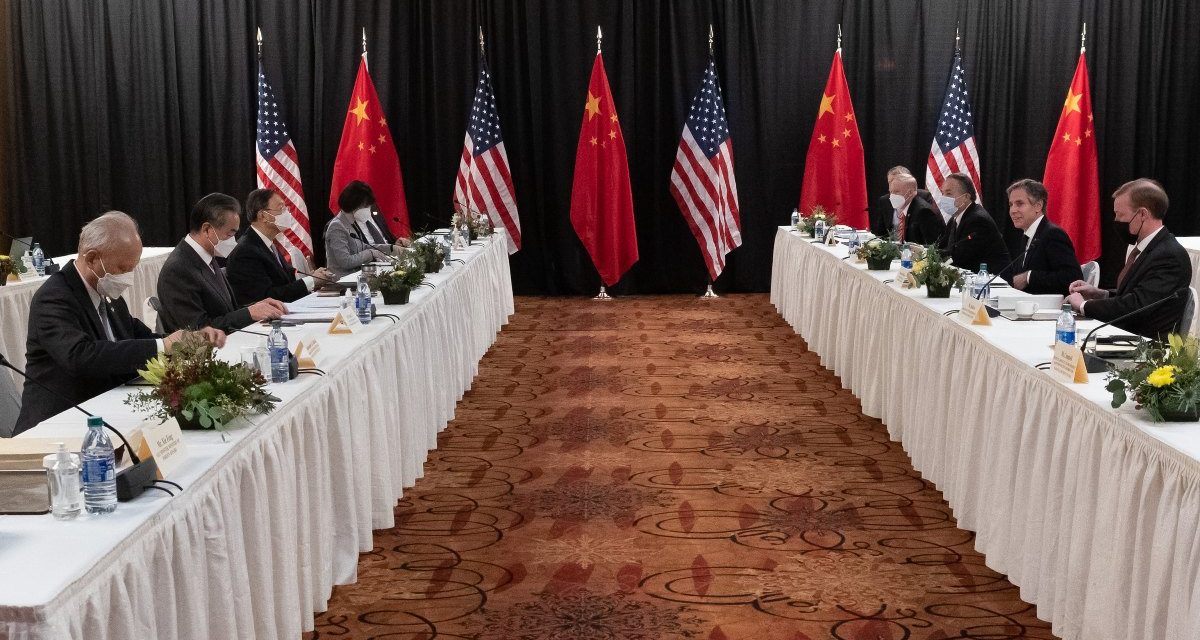 Introducing the 2018 National Defense Strategy, then US Secretary of Defense James Mattis remarked that “Great Power competition, not terrorism, is now the primary focus of US national security.” His comments reflect the bipartisan view that a rising and increasingly assertive China threatened the United States’ post–Cold War hegemony, and it compelled the United States to adopt a more competitive approach. Indeed, confrontation has characterized the Sino-American relationship in recent years, with tensions escalating across a multitude of issues. To realists, this competition is not unexpected in the anarchic international system; constructivists, however, argue against such a pessimistic outlook. Rather than an inherently anarchic international system, constructivists such as Alexander Wendt believe that ideas and identities govern international relations; great power competition exists because states create it. Therefore, by recognizing that identities are social constructs, influenced through rhetoric, malleable through interactions, but often entrenched and requiring time to change, constructivism provides US policymakers with a broader range of options to avoid spiraling towards material competition with China.

The realist school of international relations contends that the absence of a supranational authority to impose order inevitably produces anarchy in the international system, which requires rational states to rely on themselves to achieve security. States, then, pursue their interests through the accumulation of relative, often material, power. Under such zero-sum conditions, competition and conflict are thus natural and inevitable; as realist John Mearsheimer claims, “The world is condemned to perpetual great-power competition.”

In contrast, constructivism argues that the structures governing international relations, such as anarchy, are not inherent but are social constructs; intersubjective understanding of ideas, beliefs, and identities provide meaning and guide states’ behaviors, which consequently establishes structures (norms, conventions, and institutions) that define reality. Wendt’s example perfectly frames the theory: five hundred British nuclear weapons are less threatening to the United States than five North Korean ones, despite the material disparity, because of the different meaning and identities attached to both states. Similarly, the international system does not automatically make the United States and China rivals⁠—states mutually constitute such identities. Unlike realism, which prescribes competition as inevitable, constructivism is agnostic toward either competition or cooperation—it focuses on the social processes that produce these outcomes.

One social process that influences identity is rhetoric. Hence, the United States’ frequent use of anti-China rhetoric, in speeches and official documents, describes China as a “pacing threat” and “rival,” establishes competition as a norm, and constructs an antagonistic US-China relationship. Constructivist Nicholas Onuf explains that repeated speech acts establish meaning, and this creates social rules that regulate behaviors, therefore constructing reality. Worryingly, the frequency of anti-China language has increased in recent years. Foundational American strategy documents such as the National Security Strategy, National Defense Strategy, and the National Military Strategy label China as the preeminent threat, and the recent Interim National Security Strategic Guidance explicitly calls for the United States to “out-compete” China and “hold countries like China to account.” US politicians have also actively fueled the anti-China rhetoric, with examples such as former President Donald Trump’s use of “China virus” to describe COVID-19 or the bipartisan framing of various proposed legislation as anti-China bills, including the United States Innovation and Competition Act of 2021 and the Ensuring American Global Leadership and Engagement (EAGLE) Act.

The sustained influence of anti-China rhetoric portrays China as an adversary to overcome, further extending the United States’ strategic mistrust of China beyond material rivalry. Per Wendt’s articulation that actors operate based on attached beliefs and identities, this mistrust produces a US-China relationship underscored by competition, even in areas where cooperation would be feasible. In contrast, by avoiding excessive anti-China rhetoric, US policymakers could dampen the antagonistic view of China. Scholars Gavan Duffy and Brian Frederking found that speech acts by the Soviet Union and the United States contributed to ending the Cold War by progressively dismantling the Cold War’s social rules and structures. Similarly, a more accommodating narrative toward China could help de-escalate bilateral tensions and provide policymakers greater flexibility in engaging China. Recognizing that US-China competition could be a socially created construct that the United States can proactively alter, rather than realism’s inevitable endgame, opens the possibility of pursuing selective cooperation.

Beyond establishing identities through rhetoric, constructivism argues that identities are not immutable—they are modifiable through reciprocal interactions. Repeated antagonistic US-China interactions result in hostile interpretations of intent, fueling a vicious cycle of deeper mistrust and competition. Conversely, to avoid spiraling toward conflict, US policymakers could selectively cooperate with China in areas that are not inimical to US national interests. Both climate change and piracy⁠ are transnational threats, which adversely impact both countries’ security and require collective action to address. Cooperation on these issues can help build trust and create shared knowledge so that the relationship does not need to be zero-sum.

Cooperation with China also establishes the norm that the character of the relationship is not binary; strategic competition does not need to be absolute and can coexist with cooperation. Over time, such interactions could shift the underlying beliefs, interests, and strategic cultures of both countries. For instance, even at the height of the Cold War, the United States and the Soviet Union cooperated at various levels to advance nuclear nonproliferation, and these interactions altered the Soviet Union’s identity and helped to facilitate the peaceful conclusion of the conflict. Therefore, through selective cooperation with China, the United States has the opportunity to influence and inject balance and avoid the self-fulfilling prophecy of great power competition.

While socially constituted identities are malleable, identities are often entrenched within states and their societies. Hence, transformative efforts typically require an extended period to take effect. For instance, despite globalization and the potentially normative effects from increased transnational interactions, history—which is integral in constructing identities—continues to burden many states in their foreign policy and international relations. Predisposed by their post–World War II national identities, studies have found that many Chinese and Koreans continue to harbor negative impressions of Japan today. Similarly, despite their economic strength, the persistence of Japan and Germany’s post–World War II military pacifism highlights the rigidity of identities. Thus, policymakers implementing a constructivist approach to alter identities, beliefs, and cultures would need to adopt a long-term horizon and not expect immediate results. This would require consistent policy direction that transcends administrations, to provide the extended time horizon necessary to effect change. For example, China’s incremental advances in the South China Sea and its Belt and Road Initiative projects reflect a long-game strategy that underscores the pertinence of time in reconstructing China’s global identity.

Conversely, failure to recognize the importance of time in shaping identities might cause policymakers to mistakenly assess the effectiveness of certain measures. Flawed assessments, coupled with pressures to produce short-term tangible results, may inadvertently lead policymakers toward more extreme assertive actions. However, these actions tend to reflect a marked departure from established ideas and constructs. Therefore, they could be unanticipated and are prone to misinterpretation. Inadvertently, this might reinforce existing identities and result in a counterproductive outcome that political scientist Aaron Friedberg describes as “hardening.” Hence, time possesses strategic value.

The US-China bilateral relationship is the most important one in the world today. As a rising power, China needs to reassure others that its objectives are peaceful, and that it is willing to abide by the international system that has allowed it to prosper. For the United States, rather than accepting the realist worldview of inevitable competition, constructivism places the prerogative back on policymakers to define their national interests and ultimately construct their desired realities; great power competition is a means, not an end. Constructivism provides options for the United States to dampen this competition such that it does not lead to conflict. Significant political commitment and farsightedness are also necessary to provide sufficient time to overcome entrenched identities. Yet, it is this rigidity in identities that allows cooperative elements, once ingrained, to persist as a stabilizing force of the international order.

Stanley Lim is a lieutenant colonel with the Singapore Army and is currently attending the US Marine Corps Command and Staff College. Besides command appointments at the platoon and company levels, he previously worked on enhancing Singapore’s defense diplomacy efforts in the Singapore Ministry of Defence.