Strength in Numbers: Russia and the Future of Drone Swarms 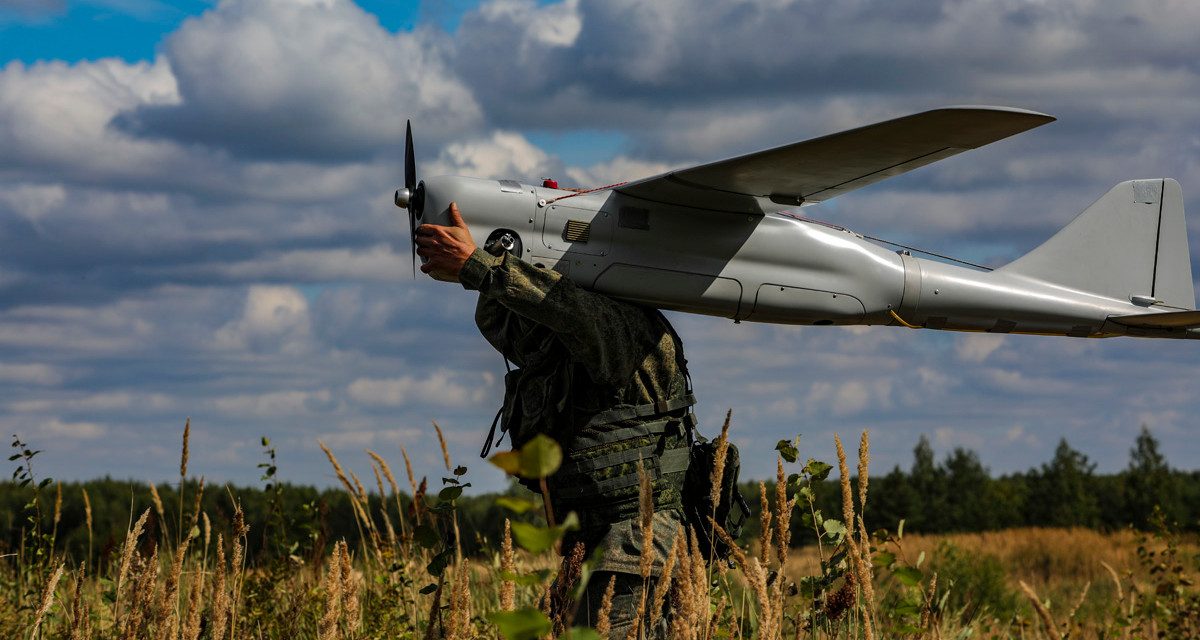 Numerous militaries, including that of the United States, are now developing and conceptualizing drone swarms—groups of uncrewed systems working together to overcome air or ground defenses, acquire and strike multiple targets at once, and create confusion among defending forces. The use of drones in recent and ongoing conflicts in Syria, Yemen and Nagorno-Karabakh has underscored the significance and utility of mass application of unmanned and autonomous vehicles. Such swarms also force the adversary to expend munitions and other military resources, thus signaling positions in a way that enables further precise attacks or electronic countermeasures. The Russian military is also working on developing swarms of robotic systems in the air, on the ground, and at sea. Some of these projects are close to reality and will likely be available to directly challenge Moscow’ s opponents in the near future. In short, allowing Russian forces to gain such an advantage via numerous uncrewed systems cooperating with their regular forces across multiple domains would have dramatic consequences for any military force that confronts them on the battlefield.

The Russian Ministry of Defense (MOD) and its affiliated institutions and organizations have in fact discussed swarm and group use for autonomous and robotics systems for a number of years. The main logic behind the mass fielding of military robotics—and one Russian military leaders have acknowledged—is to take soldiers out of a dangerous frontline tasks and replace them with expendable robotic systems. In Syria, Russian military bases and forces were subject to multiple rounds of attacks by groups of unmanned aerial vehicles (UAVs), impressing upon the MOD the utility of such a concept for targeting its own adversaries. As early as 2017, during the annual conference on the “robotization of the Russian Armed Forces” chaired by the MOD, the participants drawn from the military, academia, and the defense industry deliberated the robotic swarm concept. Following its observations on the utility of using robotic systems in Syria, the Russian military launched multiple concept developments for using such technology, including for urban-type warfare and operations that involve light and heavy unmanned ground vehicles (UGVs) working together with aerial drones in identifying and striking targets.

Given the relatively advanced development and fielding of unmanned aerial vehicles across the Russian military, it is not surprising that swarm research and development involves aerial drones. This work includes actual systems’ testing, along with thinking through concepts and tactics. For example, in 2018, MOD’s “ERA military innovative technopolis” hosted UAV swarm trials together with the scientists from the Advanced Research Foundation—an organization similar to the United States’ Defense DARPA—and Moscow Institute of Physics and Technology. That same year, Concern Radio-Electronic Technologies, a state-owned conglomerate that develops a range of military technologies, claimed that by 2025, it would develop a helicopter capable of controlling a swarm of drones.

Beyond the discussion and testing attempts, the MOD also conducted its first aerial swarm trial in 2020 with three different drone types that were used extensively in Syria, giving Russian forces layered coverage that extended up to 250 kilometers. It is likely that this specific UAV concept would be used in the Russian military, given the MOD’s drive for greater combat efficiency and its years-long experience operating different types of drones. The MOD’s Zhukovsky and Gagarin Air Academy’s Scientific Research Center is currently working on the Staya-93 proposal—Staya is Russian for “flock”—concentrating on the connection and communication between the leader and follower drones, especially when drones may be subject to extensive adversary countermeasures. Another recent swarm concept by the Kronshtadt Design Bureau called Molniya involves launching multiple jet-powered stealthy drones from manned and uncrewed platforms to conduct aerial and ground strikes and to provide electronic warfare and reconnaissance capabilities. The MOD specifically points out that by the end of 2021, Russian military forces would acquire multifunctional long-range drones to deliver precision strikes that can act in a swarm with manned aircraft, as well as with ground- and sea-based robotic systems. These drones include the Okhotnik S-70 heavy combat UAV and Altius drones. The MOD officials and academics also highlight artificial intelligence development efforts that involve robotics swarming concepts—going forward, the MOD priorities for military UAV development include introducing elements of artificial intelligence into the drone control systems, along with UAV swarm development.

More examples of how the Russian military is seeking to use the swarm are coming to light. In April 2021, the MOD announced that it is working on a project to create a specialized unmanned aerial vehicle to identify and combat enemy submarines. As envisioned, these drones will be able to operate in a swarm using elements of artificial intelligence. The MOD hints that in order to accommodate the necessary equipment and weapons, a drone model with a large payload, such as the S-70 Okhotnik or Altius, can be used. Another proposal involves Russia’s prospective long-range stealthy PAK-DA bomber launching and directing UAV swarms.

There are also multiple swarming projects dealing with ground and maritime robotics. The Advanced Research Foundation is developing the Marker UGV as a test bed for multiple technologies, including AI and swarm control for ground and aerial robots. Another UGV, the heavy Udar, is based on a BMP-3 armored vehicle chassis and is envisioned to work with UAV and UGV formations. The new Kungas concept undergoing MOD evaluation involves a group of different-sized UGVs for intelligence, surveillance, and reconnaissance, along with combat duties. The MOD is also designing an underwater microbot swarm that can work in Arctic conditions for hours at a time, while also working on a massive Iceberg underwater concept for Arctic exploration that will involve multiple crewed and uncrewed platforms. Going forward, the Russian defense-industrial establishment envisions a global network of underwater, aerial, and surface autonomous vehicles integrated with submarines, surface vessels, and logistics ships.

While modern technological limitations such as a lack of key microelectronic components or the reliance on certain imported technologies may temper some of these military plans, the wide range of projects, concepts, and developments signal that the Russian military is prioritizing eventual mass use of different types of uncrewed systems to achieve its objectives. At the same time, Russia’s commercial success in launching massive drone swarms may influence and assist how the military is thinking through the swarm concept development. With multiple projects in development, the next key task for the MOD is to formulate how such swarming concepts fit with existing force structure.

Already, the Russian MOD considers the integration of manned fighters with several heavy UAVs armed with hypersonic missiles as a sign of a major change in the future of aerial combat tactics, techniques, and procedures. The Russian military is also launching an inaugural unit equipped with twenty Uran-9 combat ground robots, while working on the concepts of operations for such groupings to function on their own and while integrated with combined arms formations. The Russian military learned an important lesson in Syria when it tested the Uran-9 in 2018—that one-time and preferably stationary use of these vehicles would be more effective against adversary hard points and stationary targets. It is therefore likely that the Uran-9s allotted to the new military unit may be applied in a coordinated group attack to identify enemy targets, and coordinating their data feed with ground- and air-based assets for subsequent and follow-on strikes.

When it comes to utilizing AI for swarms’ command and control, the Russian military establishment and its experts admit that much work remains in developing key algorithms that would be able to guide the combat robots through the uncertainty and unpredictability of a combat environment. Whether such AI application can be developed would largely determine the swarm’s ability to operate in the first place as envisioned by the MOD. Another related issue that the MOD is tackling is ensuring secure communications among the swarm members, and between the robotic swarm and the command-and-control functions controlled by human operators. Finally, the Russian military is debating the ethics of utilizing AI in military robotics, with military experts and defense officials arguing that human control would still be ensured over these systems in the near future.

With the global military robotics race only expected to accelerate, these Russian developments may present a challenge to Western forces’ quest to remain dominant in combat, should they be forced to target and defend against multiple incoming targets. For the United States, this challenge requires not just the formation of a new doctrine of its own that combines crewed and uncrewed platforms, but the parallel development of countermeasures against the impending drone swarms that operate in the air, on the ground, and at sea. Key to meeting these challenges is continuing to experiment with different technologies, and the need to marshal both public and private resources to develop effective policies that guide technology development in the coming era of the swarm. One thing is sure at this point: Russian military swarms may soon see the light of day, changing the combat calculus not only for their own forces, but for any who oppose them as well.

Samuel Bendett is an analyst with CNA’s Russia Program and an adjunct senior fellow with the Center for New American Security’s Technology and National Security Program. Previously he worked at the National Defense University.

Image credit: Ministry of Defence of the Russian Federation