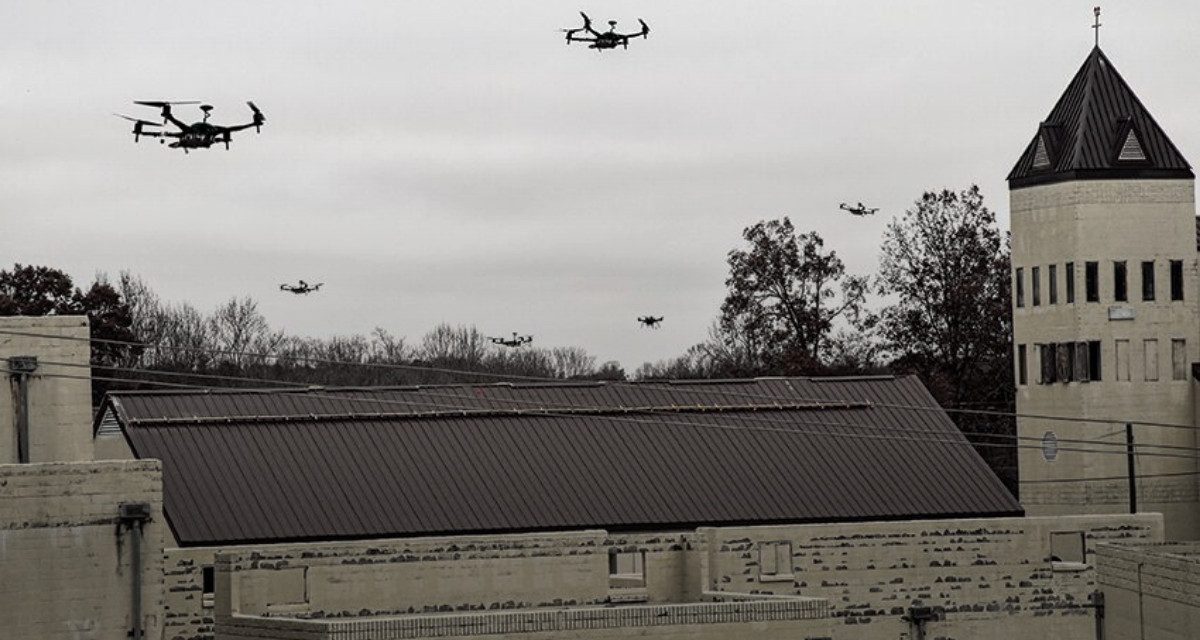 In May 2021, during its conflict with Hamas, the Israel Defense Forces became the first military to use a drone swarm in combat. Not much is known about the event, other than that Israel used the drone swarm to strike “dozens” of targets in concert with other missiles and munitions. Often media outlets use the phrase “drone swarm” to just mean many drones used at once. But this was  a true drone swarm, meaning the drones communicated and collaborated in making collective decisions.

The event is just the beginning. Numerous states from South Africa to South Korea are developing or acquiring drone swarms intended to operate across land, sea, air, and potentially even space. Drone swarms may operate in multiple domains at once, incorporating different types of weapons payloads and sensors. To manage this complexity, militaries need a basic typology for sorting different types of drones.

The most intuitive—and useful—such typology would categorize drones within a drone swarm based on the role they play within the swarm. These categories would not necessarily be discrete, because a single drone could play multiple roles in theory. Likewise, drone swarms may have different combinations of drone types based on the mission. A swarm of undersea drones meant to create a distributed sensor network for submarine searches will look very different than an aerial swarm to suppress enemy air defenses. Ideally, a drone swarm should also be flexible to allow mission commanders to adjust the swarm composition based on mission parameters, perhaps incorporating different types of attack or sensor drones. With those facts in mind, a set of five categories takes shape: attack, sensor, communication, decoy, and mothership drones.

Attack (and other Effects)

Attack drones carry weapons payloads to strike enemy targets. This can be any sort of weapons payload from guns and bombs to missiles, electronic attack, and chemical weapons. Drones may also have other types of effects, such as chemical weapons disinfectants or mine countermeasures. The type of payload will, of course, be limited by the carry-weight of the drone. A tiny quadcopter is not carrying a Hellfire missile. But a large unmanned surface vessel might carry a Tomahawk missile.

Different types of attack drones may be used for combined arms tactics. They could also mix conventional weapons with other effects—for states flouting legal bans, this could even mean chemical weapons—within a swarm to create dilemmas for defenders: Do they don protective gear or dodge the hail of bullets? Of course, such a drone swarm would violate the Chemical Weapons Convention; however, the United States and others may face it on the battlefield. Likewise, multiple payloads create options for responding to different types of defenders and targets. One drone may carry an antitank missile, while others carry bombs or guns.

Sensor drones capture information about the environment. That information can be used for the swarm to identify targets and to avoid defenders and hazards. Information collected may be shared with the broader swarm to help guide movement, carry out strikes, or make simple decisions on swarm behavior. Typical sensors include electro-optical, infrared, and LIDAR (light detection and ranging). Specialized sensors for chemical, biological, or radiological material may be incorporated as well. Sensors may be on the drone itself, or the drone may distribute the sensors throughout a real or potential battlefield.

Sensor drones enable a particularly useful behavior of drone swarms: the ability to create dispersed sensor networks. Drones with different sensor types can spread broadly over an area to collect intelligence, identify targets, or watch for incoming attacks. When a drone identifies an object of interest, it can share that with the broader swarm, perhaps drawing in more sensor drones to search the area for similar objects or confirmation. That is especially useful for identifying mobile targets that are often more difficult to find and fix.

Sensor drones may be integrated with other drone types. For example, Russia claims to be testing a swarm with integrated aerial sensor and ground attack drones in which the aerial drones feed information to the ground drones to guide its fires. Likewise, sensor drones may recognize the presence of a defender system and share that information with decoy drones to confound and disrupt that system.

Communication drones help ensure the drone swarm maintains its integrity. The drones may serve as relay nodes for communications from external sources, provide an alternative route for interswarm communication, serve as a signal boost in the event of adversary jamming, or provide emergency retreat orders on unjammed frequencies. The design and behavior of such a drone also would need to accommodate the role. As primarily a support or backup function, the communication drone would need to avoid being caught in enemy fire. Likely, it would also need to devote more power output to ensuring any broadcasted signal stays strong.

Decoys do not do all that much. Mostly they get in the way. But that can be useful. Mass is one major advantage of drone swarms. More and more drones can be thrown at a target until it is overwhelmed and destroyed. The swarm may lose a few drones in the process, but if enough get through, there can still be victory at relatively low cost. Decoy drones increase that mass at low cost, because they do not require any integrated weapons, sensors, or other payloads. They are mostly there to absorb defender fires and protect the more valuable drones.

Of course, decoys can be made more sophisticated. They may be designed to give off signatures to trick defenders into believing they are actually manned aircraft. For example, during the 1973 October War, Israel used drones to trick Egyptian air defenses into turning on their radar and firing against the wrong targets. This wasted Egyptian ammunition, but more significantly it helped Israel identify the location of the defenses. Israel did the same during the 1983 conflict with Syria over the Bekaa valley. Alternatively, decoy drones may be used to convince defenders that the bulk of the swarm is in another location, which would complicate response to an already omnidirectional attack.

When it comes to drone swarms, complexity is the name of the game. A drone swarm may contain all sorts of drones of different shapes, sizes, and roles. Preparing to use and defend against a drone swarm requires simplifying that complexity to figure out what really works and what does not. That’s where a properly defined typology proves its worth.

Militaries should experiment with different combinations of drones. What combination of attack, sensor, communication, decoy, and mothership drones are most effective in various circumstances? That should include not only ratios of the different types of drone, but the combinations within specific classes. For example, should a counterswarm swarm include more electronic or kinetic attack drones? The answer will also likely vary based on the domain(s) of use and the other types of deployed weapon systems and platforms.  Figuring that out may require modeling and simulation, exercises, and wargaming using both real and synthetic environments.

Battlefield commanders should also consider how drone swarm characteristics mesh up with operational details. A commander may flex the number and type of drones based on collected intelligence about likely threats. The commander may want to add more communication drones to prepare for possible electronic attack, or add specific types of attack drones designed to target, say, tanks or infantry formations.

The era of the drone swarm has just begun. Israel’s use of a drone swarm in combat earlier this year might have been the first such instance, but it will not be the last. That means that militaries need to make a concentrated effort to think carefully about how to design and build optimal drone swarms to achieve mission objectives.