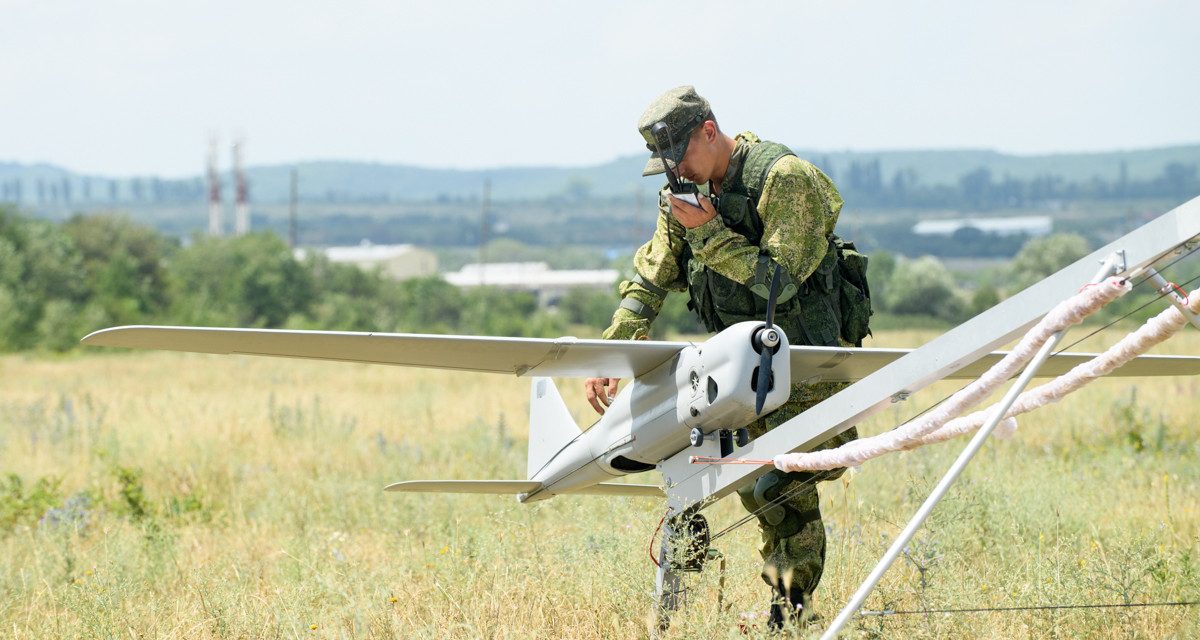 Last month, the Russian military conducted large-scale annual exercises in Russia’s Southern Military District called Kavkaz-2020. The Kavkaz series of exercises runs on an annual basis, which might suggest that they are merely routine military training and war games. And in some ways, this year’s iteration was. But in at least one aspect, Kavkaz-2020 was anything but routine: the exercises demonstrated for the first time that Russia has a capability to use mass drone warfare in conjunction with its massive conventional power for offensive operations against the United States and NATO.

This year’s wargames were characterized as being defensive in nature, and official messaging from Moscow said they were aimed mainly at preparing to counter terrorists. They featured some eighty thousand Russian troops and one thousand foreign forces, along with hundreds of combat aircraft, around 250 tanks, 450 armored vehicles, two hundred artillery pieces, and a flotilla of warships.

The exercises involved a series of ground, air, naval, air defense, engineering, logistics, and chemical, biological, radiological, nuclear units over an area ranging from the Caspian and Black Seas to the Caucasus and Volgograd in southern Russia. Kavkaz-2020 also saw Russian forces training with Armenian units, Iranian missile boats in the Caspian Sea, Chinese staff officers in planning sessions, Belarusian and Pakistani personnel, as well as forces from the Georgian breakaway territories of Abkhazia and South Ossetia and from Crimea, annexed from Ukraine in 2014. Other participating states reportedly included, Syria, Mongolia, Myanmar, Indonesia, Sri Lanka, Turkmenistan, and Kazakhstan. (Notably, Kavkaz went ahead without several important intended international participants, including Azerbaijan, India, and Serbia.) According to Russian Chief of the General Staff Gen. Valery Gerasimov, Kavkaz was based heavily on Russian combat experience gained in Syria and Libya.

Some New, Mostly Not

Russia showcased a supposed new combat formation, the “mobile echelon” in action with a variety of reconnaissance, fire control, and strike systems. This was apparently geared toward defeating cruise missiles and unmanned drones, but is based in large part on Russia’s encounters with suicide vehicle-borne improvised explosive devices in Syria. It is important to note that there is little new in Russian motorized rifle regiments employing mobility, reconnaissance, and overwhelming artillery firepower in defensive operations.

Naval operations were also similarly confined, in their case to amphibious countermining and interdicting supplies (again, seemingly to an insurgency or terrorist force). Successful precision land-attack strikes were conducted by the Black Sea Fleet, including by a Kilo-class conventional-powered patrol submarine employing Kalibr cruise missile at a range of 185 kilometers. As well, the Bal coastal defense missile and Bastion mobile coastal defense missile systems were used for precision strike against enemy forces at sea.

Air defense operations concentrated on the S-400 surface-to-air missile system and Pantsir-S1 anti–cruise missile system at the Ashuluk testing range. Russian layered air defense assets practiced countering an attack by a technologically advanced state actor, targeting enemy radars, anti-aircraft units, and airfields. While the exercises were described by Russia as defensive and focused on counterinsurgency and counterterrorism, the emphasis with respect to air defense was clearly on countering cruise missile attacks, as Gen. Gerasimov acknowledged. This, too, is nothing new—it has been a central feature of Russian war planning and training since the days of Marshal Nikolai Ogarkov.

But the most significant part of the wargames employed the mass use of a swarm of drones to target and assist in the destruction of enemy forces (“terrorists,” according to the Russian Ministry of Defense). At least three models of drones—Forpost, Orlan-10, and Eleron-3—were employed together on the Kapustin Yar testing range. The Forpost is a Russian version of an Israeli Searcher reconnaissance drone; the Orlan-10 is a system that can include three to five separate aircraft each performing a range of missions, including reconnaissance and electronic warfare; and the Eleron-3 is a reconnaissance and command-and-control unit. According to reports, the drones flew at altitudes of one hundred to five thousand meters, targeting enemy assets deep behind the lines. The swarm, acting in unison, spotted mobile military units to target, but significantly, the swarms were used to enhance intelligence, surveillance, and reconnaissance and not for strike. Russian forces have shown in Ukraine that their drones are tightly integrated with artillery, especially multiple rocket launchers such as the Smerch and Uragan systems. These weapons almost annihilated two Ukrainian battalions in minutes at Zelenopillya in July 2014, when Ukrainian brigades marshalling for offensive operations were overflown by Russian drones. Moments later, they were targeted in a pre-emptive multi-barrel rocket attack with devastating results. It should be noted that Russia continues to maintain an advantage over the United States and NATO in terms of both artillery and rocket munitions and when coupled with drone units are a cause for considerable concern.

How Significant Was Kavkaz-2020?

From a geopolitical perspective, Kavkaz demonstrated Moscow’s loss of market share for influence in the Caucuses and the Balkans to other state powers and that it could not broker even a temporary truce between its friends India and China for the exercises. Moscow also clearly views China, Iran, Belarus, and Armenia as key allies. And unsurprisingly, Russia continued to push the envelope on its international obligations to treaty-monitoring bodies such as the Organization for Security and Cooperation in Europe exercising 80,000 troops but claiming the number to be less than 13,000—the figure above which would have required Russia to invite international observers.

From a strictly military point of view, Kavkaz-2020 demonstrated a range of Russian military capabilities, including joint operations with potential allies, combined conventional warfare, counterinsurgency, precision strike, and operations geared to air defense against an advanced adversary. While Russia maintained that exercises were defensive and geared toward nonstate actors, Kavkaz clearly focused considerably on fighting a state adversary. Most interesting and significant was Russia’s use of unmanned drone swarms to support attacks against enemy formations. This use of unmanned vehicles demonstrates that the Russian general staff has continued its efforts to increase the accuracy of its firepower and precision-strike capability in both defensive and offensive operations. Russia is leveraging its wartime experience in force protection in Syria to enable offensive drone operations against technologically advanced Western military forces. So if there is one takeaway that the United States and its allies should note from Kavkaz-2020, Russia’s efforts to combine drones with its conventional military capabilities is it.