Tactics and the Human Factor 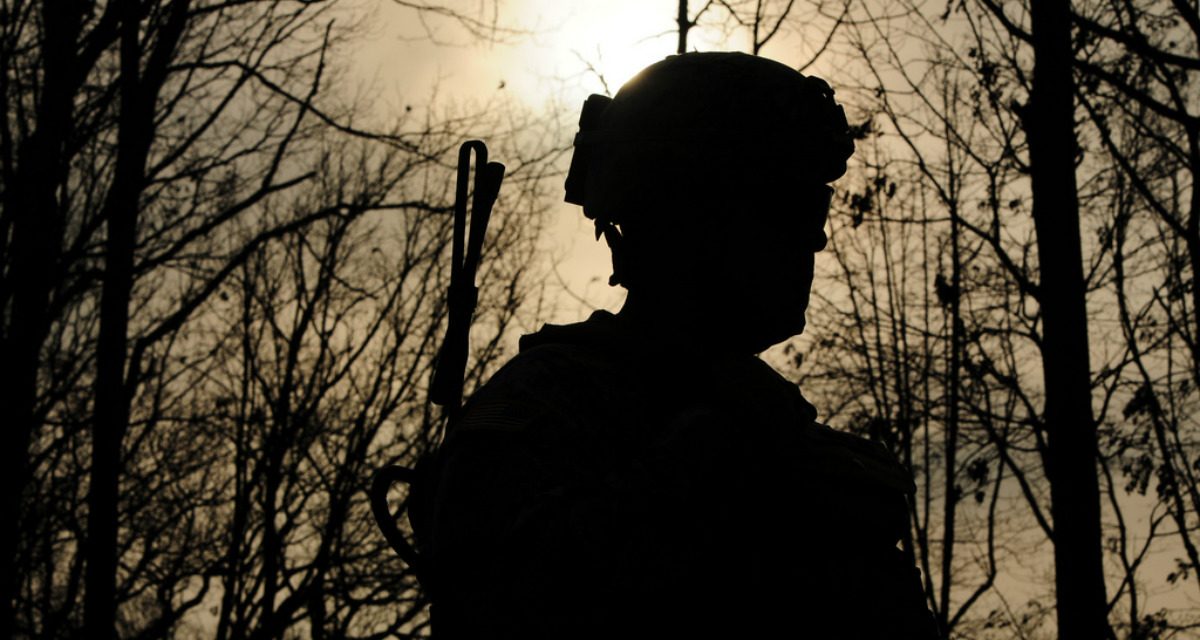 It was four years ago that the military began to seriously look at leveraging an expanded range of military technologies to include robotics and autonomous systems. Like any major change in such a large organization, this “Third Offset Strategy” has taken a while to put into action. It was not until last month that the Trump administration revealed a new $686 billion defense budget to fund many of those technological developments. While our military should continue to develop the newest, most lethal and precise weaponry, it should do so with the realization that even increased technological development will not provide decisive victory in US military conflicts abroad. To produce desired military effects, the US military must also focus resources and attention on its most important asset: its people.

Gen. Robert Brown, commander of US Army Pacific, echoed this sentiment in his 2014 Human Dimension white paper: “Material solutions alone will not provide the decisive edge against the complex array of rapidly adapting threats we face.” However, here we are, four years later, with no major changes in the way we develop, train, or enhance the cognitive and social abilities of our soldiers. Furthermore, the Pentagon has emphasized the importance of making the most foundational formation in our Army, the infantry squad, as lethal as possible. Unfortunately, we have approached lethality with an extremely narrow lens, focusing on physical technology like better weapons, optics, and body armor instead of focusing on the soldier who employs those tools.

The “threats” Gen. Brown mentioned have changed drastically since 2014. In January, Secretary of Defense James Mattis issued the 2018 National Defense Strategy, which firmly solidified strategic competition with China and Russia as the central area of focus for US defense planning. It is no secret that China and Russia have developed military technologies on par with and in some instances far more advanced than current US capabilities. So what do we do? Continue the technological arms race to out-fight the enemy?

Some leaders in our military offer an alternative approach. Robert Work, the former deputy defense secretary and key advocate of the Third Offset Strategy, acknowledges that the West’s strongest and longest-lasting military advantage will be the quality of the people. This “human factor” is not new to the US military. Army leaders like former Army Chief of Staff Gen. Ray Odierno and Gen. Brown have been advocating for increased focus and training relating to what the Army now calls the “human dimension.”

In 2015, Gen. Odierno commissioned the Human Dimension Strategy to outline the way ahead for development of human dimension in the US Army. The paper defined the human dimension as the cognitive, physical, and social components of the Army’s trusted professionals and teams. It also described the need to “optimize the human performance of every Soldier” and “build cohesive teams of trusted professionals who thrive in ambiguity and chaos.” While this document provided a well-researched, strategic-level vision, it did not indicate how our Army’s tactical units will go about achieving that end.

To junior leaders the strategic-level scientific research seems a bit fuzzy. What does it actually mean to a company commander? To a platoon leader? Or a team leader, the leader closest to soldiers? We integrated Gen. Brown’s human dimension–focused approach into company training in the 25th Infantry Division, and reached several conclusions about implementing the Human Dimension Strategy at the tactical level.

The Need for an Operational Model

Col. Rob Ryan, commander of 3rd Brigade, 25th Infantry Division (“Broncos”), challenges all of his subordinate leaders to consistently train the “Big 5”—physical fitness, marksmanship proficiency, medical skills proficiency, small-unit tactics, and mobility. These fundamentals are emphasized for a simple reason: they reflect what soldiers, teams, squads, platoons, and ultimately the brigade need to do well to win in combat.  But while they are certainly vital to our success in combat, they can be improved by integrating the human dimension into our current “Big 5” training plan.  We view the human dimension as the buttress that enables mastery of Big 5 tasks. If our soldiers are smarter, fitter, socially and mentally healthy individuals we will be better prepared to win on a complex and ever-changing battlefield.  Call it the Big 5 + 1. 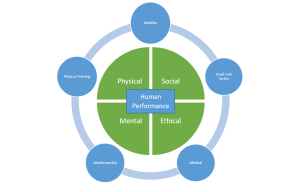 Why do Bronco leaders emphasize training the Big 5? Because there is command emphasis on those training priorities.  Integration of human performance training into the tactical level will require a similar command emphasis.  By developing human dimension training into an architecture similar to the Big 5, we will provide the operational framework to translate the strategic vision into a tactical reality.  This will allow commanders at all echelons to provide annual training guidance for the human dimension and a metric to assess proficiency in the respective categories.

In one of Col. Ryan’s infantry companies we have narrowed down human dimension training into four components: cognitive, social, physical, and ethical. We have started to experiment with human dimension development at the soldier level by implementing version 1.0 of human dimension “training components.” By overlaying cognitive- and social-focused training into our infantry company’s normal training glide path, we have started to change the paradigm of training. By no means do we think we have found the golden solution for the entire US military—that’s why we’re calling it version 1.0—we have experienced fundamental changes in how the company interacts with each other and tackles problems. Among other efforts, we have used behavioral and personality assessments to increase our units’ individual self-awareness and overall team cohesion. Furthermore, we have leveraged technology to create online professional development forums and change the way we learn our basic soldier tasks by utilizing smartphone-based software to enable learning. Finally, we have begun experimenting with complex-thinking exercises that introduce heuristic techniques and train our soldiers to think about problems in different ways.

As we look to expand our human dimension training to leverage immersive reality and sports psychology, we continue to use qualitative and quantitative measures to capture the effectiveness of the training program. Yet, the integral factor for success remains the performance at and feedback from the soldier level.

The biggest challenge that human performance training faces is that many of our soldiers and leaders view three of the four components—cognitive, ethical, or social development—as an educational exercise, not as training that makes them more lethal and effective soldiers. But cognitive or social training can and should be closely tied to as much field or tactical training as possible, and need not rely on classroom instruction as the sole method for training. By changing the medium of training, from the PowerPoint slide to a soldier’s smartphone during a field training exercise, our Army’s junior leaders will be able to teach techniques and methods of reflection, attention management, complex thinking, and cultural acuity, all in dynamic environments outside the classroom.

The Future of the Human Dimension

From our experience and continued development of our training components, we believe that human performance training, just like marksmanship or small unit tactics, should be implemented as a component of all company-level training. Our senior Army leaders should enable junior officers and noncommissioned officers to train human performance. By granting ownership of the training to the lowest level, our junior leaders will become integral stakeholders in human dimension development.

Yet, ownership of training is not enough. Our senior leaders must also allocate proper resources and time for this training to occur. Resources in this case look like developed training packages that focus on the physical, ethical, social, and cognitive components of the human dimension. Each one of these training packages should have a training glide path that starts with basic proficiency and builds to mastery. Furthermore, subject matter experts need to be placed as close to the tactical level as possible, so a unit leader can request and plan for behavioral psychologists, moral and ethical specialists, and strength trainers to support his or her unit’s training plan. Of course, pointing to problems is not enough, so in a follow-on article we will clearly define and outline our potential solution to training human dimension at the tactical level and hopefully begin a productive discourse on what “right” looks like in human dimension training.

Rather than simply wait for our strategic level commands to produce the approved tactical-level solution, we want to help build the solution from the bottom up. We should utilize the Army’s Rapid Capabilities Office to start implementing human dimension training under a version-based approach immediately. Gen. Brown has led the human dimension effort in the past. He has shown expertise in and dedication to his soldiers’ cognitive and social development. Following his lead, version 1.0 of the Army human dimension training roll-out should begin with an entire battalion in one of his subordinate commander’s divisions and subsequently be passed throughout the Army when training implementation issues have been ironed out. With the geopolitical environment becoming more complex every day, it is time to develop agile and adaptive soldiers who thrive in ambiguity and chaos.

1st Lt.  Connor Love is a member of Gen. Robert Brown’s Commander’s Action Group at US Army Pacific Command. He holds a master’s degree from the University of Oxford, where he wrote his thesis on UK and US veteran policy. He commissioned as an armor officer out of West Point in 2014 and has contributed to the Huffington Post, New York Times, and Stars and Stripes.

Capt. Jeffrey Hubler is the company commander of A/2-35 IN, 3 IBCT, 25th Infantry Division. In 2012, he deployed in support of Operation Enduring Freedom as a Stryker platoon leader and has since served in multiple brigade and battalion staff roles.

The views expressed are those of the authors, and do not reflect the official position of 3rd Brigade, 25th Infantry Division, U.S. Army Pacific Command, Department of the Army, or Department of Defense.