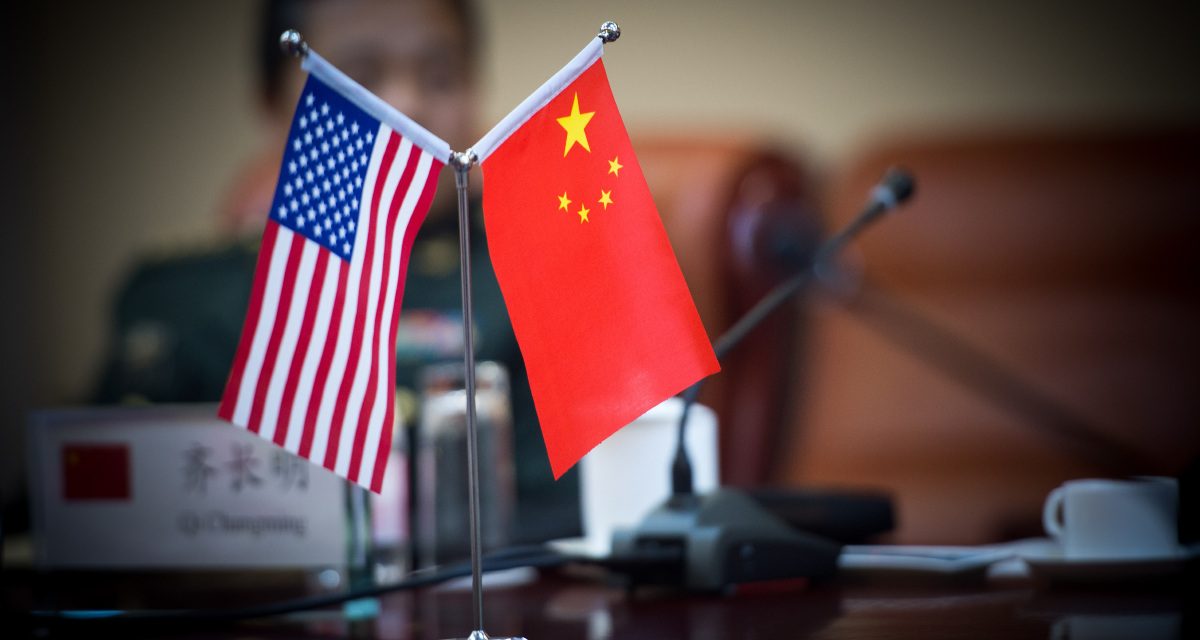 Editor’s note: Last fall, Stanford University hosted a brand-new class—Technology, Innovation, and Modern War. This year, the course is once again being taught by Steve Blank, Joe Felter, and Raj Shah, but they have broadened the scope to examine how technology and innovation impact the whole-of-government approach necessary to successfully compete with great power rivals. Once again, Steve Blank is writing about each class session and offering MWI readers the opportunity to follow along with the new course.

We just had our first week of our new national security class at Stanford—Technology, Innovation, and Great Power Competition. Joe Felter, Raj Shah, and I designed the class to cover how technology will shape all the elements of national power (our influence and footprint on the world stage).

National power is the combination of a country’s diplomacy (soft power and alliances), information and intelligence, and its military and economic strength. The instruments of national power brought to bear in this whole-of-government approach were long known by the acronym DIME (diplomatic, information, military, and economic) and in recent years have expanded to include FIL (finance, intelligence, and law enforcement)—or DIME-FIL.

Last year, the class focused exclusively on the impact of new technology on the military. Given the broadened scope this year, we’ve tweaked the course content and title to Technology, Innovation, and Great Power Competition to better reflect the whole-of-government approach necessary for long-term strategic competition.

The course is cross-listed with Stanford’s master’s in international policy program and the Management Science and Engineering department. The students joining this fight come from a diverse range of disciplines at Stanford including computer science, political science, business, law, public policy, economics, and engineering. If the past is a prologue, they’ll go off to senior roles in defense and foreign policy and to the companies building new disruptive technologies. Our goals are to help them understand the complexity and urgency of the issues, offer them a model to understand the obstacles and path forward, and to inspire them to help lead how the United States leverages all instruments of national power to meet twenty-first-century challenges.

In this year’s class, we want to:

Our speaker for our first class was former Secretary of Defense and retired General Jim Mattis, who gave an inspiring talk about strategy, the Department of Defense’s pivot to great power competition that he led during his tenure as secretary, and the importance and rewards of service to the nation.

General Mattis joined the Marine Corps in 1969 and has led Marines and joint forces at every level from platoon commander as a lieutenant all the way up to combatant commander of US Central Command as a four-star general. He recently led the entire Department of Defense as our country’s twenty-sixth secretary of defense. We’re fortunate to now have him back here at Stanford at the Hoover Institution.

You can see the slides for this class by clicking here. Note: slides 1–19 introduce the teaching team and class logistics.

We set up the class with a discussion of the return of great power competition. This isn’t an issue of which nation comes in first, but about what the world order will look like for the rest of the century and beyond. Will it be a rules-based order where states cooperate to pursue a shared vision for free and open regions and where the sovereignty of all countries large and small is protected under international law? Or will an alternative vision for an autocratic and dystopian future be coerced and imposed by revisionist powers set on disrupting the US-led international order—an order that has brought the world unprecedented peace and prosperity since the end of World War II?

These documents reoriented the United States from its focus on counterterrorism to great power competition with Russia and China (slides 23–27). Slides 34–38 expanded on the three lines of effort in the National Defense Strategy: building a lethal force, strengthening alliances and building new partnerships, and reforming the Department of Defense. Slides 41–42 summarized the competing visions of the United States and China. The Biden administration’s Interim National Security Strategic Guidance, which emphasizes continuity in its assessment of the challenges posed by China and Russia and the anticipated enduring era of great power competition, was introduced next. (The White House is now referring to the approach toward China as “strategic competition” rather than great power competition.)

Slides 45–55 introduced seven instruments of national power and the concept of DIME-FIL. We discussed the ways in which the national power of a country (its influence and footprint on the world stage) is more than just its military strength. It’s the combination of a country’s diplomacy (soft power and alliances), information, and its military, economic, financial, intelligence, and law enforcement strength. We pointed out that in many of these areas we’re no longer the leader—a situation for which DoD has a polite euphemism, “we’re overmatched,” meaning we’re in second place.

Slides 57 and 58 reminded the students that this class is not just about the reading and lectures. Half of their grade is a group project at the intersection of DIME-FIL and dual-use technologies (AI and machine learning, quantum, semiconductors, access to space, cyber, biotech, etc.).

We just had our second week of our new national security class at Stanford—Technology, Innovation, and Great Power Competition. Joe Felter, Raj Shah and I designed the class to cover how technology will shape all the elements of national power (our influence and footprint on the world stage).

A key focus of the class is the return of great power competition. This isn’t an issue of which nation comes in first, but rather about what the world order will look like for the rest of the century and beyond. Will it be a rules-based order where states cooperate to pursue a shared vision for a free and open region and where the sovereignty of all countries large and small is protected under international law? Or will an alternative vision for an autocratic and dystopian future be coerced and imposed by revisionist powers set on disrupting the US-led international order—an order that has brought the world unprecedented peace and prosperity since the end of World War II?

Our speakers for our second class were Matt Pottinger and Matt Turpin.

Matt Pottinger previously served as the deputy national security advisor and National Security Council senior director for Asia. As a former Marine, Matt had three combat deployments in Iraq and Afghanistan. Prior to joining the Marine Corps, Matt was a reporter in China, first for Reuters, then for the Wall Street Journal.

Matt Turpin previously served as National Security Council director for China and the senior advisor on China to the US secretary of commerce. Before entering the White House, Turpin served over twenty-two years in the US Army. Among other roles focused on the Indo-Pacific region, he served as a China advisor to the chairman of the Joint Chiefs of Staff at the Pentagon and assisted the deputy secretary of defense with the Defense Innovation Initiative, examining the role of innovation in US defense policy.

Slides 7–10 are selected quotes from our assigned reading. Our lecture and discussion (slides 11–16) took us through the evolution of the hopes the United States had for its four-decade-long strategy of diplomatic and economic engagement with China. The hope was that helping China grow its economy would lead to liberalization of its government and greater freedoms for its people. Deng Xiaoping said China needed to “hide our capacities and bide our time.” Over time, Xi has moved China to a more overt and aggressive phase, no longer hiding its intentions to challenge the West. As we discovered, China’s agenda always had been radically different than ours. The growing realization over the last five years is that our hopes for China to democratize as it developed economically were terribly naïve. What we’ve come to realize is that China has been playing a decades-long game to challenge and overturn the US-led liberal international order and replace it with a neo-totalitarian model.

Realizing this, four years ago the United States reoriented from a focus on counterterrorism to a new emphasis on great power competition with Russia and China. This new effort can be seen in the Interim National Security Strategic Guidance (which outlines the major US national security concerns and how we plan to deal with them) and 2018 National Defense Strategy (which identifies the priorities and capabilities required by the warfighters to implement the National Security Strategy).

Relevant to this course, China is using all elements of national power, including diplomacy (soft power, alliances, coercion), information and intelligence (using its economic leverage over Hollywood, controlling the Covid narrative), military might, and economic strength (Belt and Road Initiative). China has exploited Western finance and technology and has successfully convinced Western democracies to prioritize economic cooperation and trade with China above all else.

At home, China’s use of digital authoritarianism (facial recognition, biometrics, and social credit) has turned its own country into a surveillance dystopia to ensure that there are no internal challenges to the supremacy of the CCP. The CCP’s oppression of the Uyghurs—a Muslim minority in the western province of Xinjiang—is considered a genocide by many as well as a harbinger of what a Chinese-led world order will look like.

Going forward, coexistence with China will involve competition but also cooperation. But it’s going to take the demonstrated resolve of the United States and its allies to continue to uphold a rules-based order in which nations share a vision of a free and open Indo-Pacific where the sovereignty of all countries is respected.

Slides 18–20 dug a bit deeper about why and how of the group project. Students formed teams to work on one of the great power competition issues at the intersection of commercial technologies (AI, machine learning, autonomy, biotech, cyber, commercial access to space, etc.) and DIME-FIL (diplomatic, information, military, and economic, finance, intelligence, and law enforcement).

Given who our students are, we assume they can all go online and to the library and write a great research paper. As we pointed out to them, while you can be the smartest person in the building, it’s unlikely that (1) that all the facts are in the building and (2) you’re smarter than the collective intelligence sitting outside the building.

Our teaching assistants (who previously took our Hacking for Defense class) shared with the students their own journey of what happens to early assumptions and how solutions evolve when you get out of the building.

If you can’t see the Project Agrippa slides, click here.

We want our students to build the reflexes and skills to deeply understand a problem by gathering firsthand information and validate that the problem they are solving is the real problem, not a symptom of something else. Then, students will begin rapidly building minimum viable solutions (policy, software, hardware, etc.) as a way to test and validate their understanding of both the problem and what it would take to solve it.

And they thought we were just going to have great lectures.