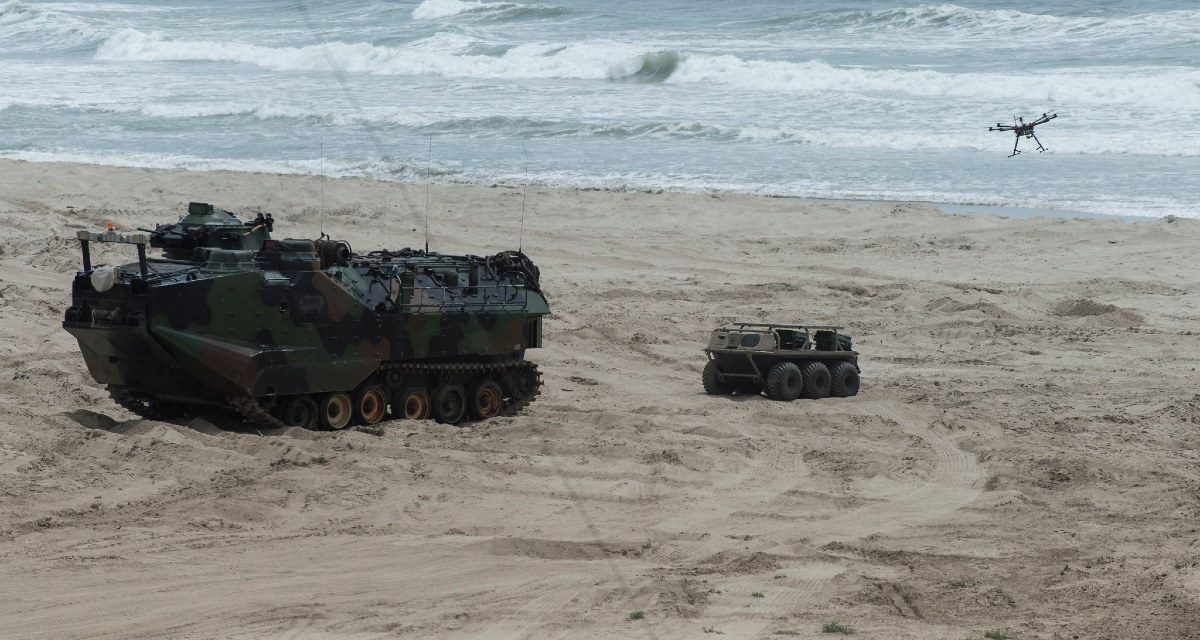 Editor’s note: Last fall, Stanford University hosted a brand-new class—Technology, Innovation, and Modern War. This year, the course is once again being taught by Steve Blank, Joe Felter, and Raj Shah, but they have broadened the scope to examine how technology and innovation impact the whole-of-government approach necessary to successfully compete with great power rivals. Once again, Steve Blank is writing about each class session and offering MWI readers the opportunity to follow along with the new course. Read about previous sessions here.

We just completed the fifth week of our new national security class at Stanford—Technology, Innovation, and Great Power Competition. Joe Felter, Raj Shah, and I designed the class to cover how technology will shape all elements of national power.

In previous classes, we learned about the elements of national power—a combination of a country’s diplomacy, information, military, and economic strength, along with finance, intelligence, and law enforcement (captured by the acronym DIME-FIL). We also learned about the ongoing strategic competition with China and with Russia. And we discussed the impact commercial technologies have on DIME-FIL.

In class five, we turn our attention to artificial intelligence and machine learning.

US AI Strategy under the Obama Administration

US AI Strategy under the Trump Administration

US AI Strategy under the Biden Administration

Other AI and National Security Resources

Our speakers for our fifth class were Mike Brown, Nand Mulchandani, and Jacqueline Tame.

Mike Brown is the director of the Defense Innovation Unit (DIU), a Department of Defense organization that contracts with commercial companies to solve national security problems. Previously Mike was the CEO of Symantec and Quantum.

Nand Mulchandani is the chief technology officer of the Joint Artificial Intelligence Center (JAIC). The JAIC is the focal point of the Department of Defense AI strategy.

Jacqueline Tame was the former acting deputy director of the JAIC and the architect of the JAIC Gamechanger, an AI-driven policy analysis tool.

Mike Brown led off the session with an overview of DIU.

One key takeaway from Mike’s talk was that fifty years ago defense-related R&D made up 36 percent of global R&D. Today, defense-related R&D is 4 percent. Key technologies needed by defense today are made by commercial companies (5G, AI, biotech, quantum, access to space, batteries, etc.). A second key takeaway was that the top tech companies (Facebook, Alphabet, Microsoft, Amazon, and Apple) outspend US prime contractors eleven to one in R&D ($70.5 billion versus $6.2 billion).

DIU’s role is to find and then funnel commercial technology into DoD by prototyping, transitioning, and scaling solutions. They have (by DoD standards) an extremely fast pipeline from problem curation, to evaluating and selecting companies, then prototyping projects and inserting them into DoD programs.

Nand Mulchandani described the role and the initiatives of the JAIC. One in particular, Gamechanger, was conceived and run by Jacqueline Tame.

Gamechanger uses AI to tackle a problem only a government could create. DoD and federal regulations have tens of thousands of policies, laws, and regulations that tell decision makers what they can or cannot do. These exist in different places on different networks and change almost daily. With Gamechanger, you could simply type a natural language query that asks, “Do I have the authority do X?” or, “How can purchase this item quickly?”

Our first discussion in class (slide 7) was whether the claim by Nicholas Chaillan (the first Air Force chief software officer) that we have already lost the AI battle to China was correct.

Slides 9–14 kicked off the discussion of the geopolitical implications of AI. How will it impact all DIME aspects (diplomatic, intelligence, military, and economic) of national power?

Next week the class will discuss autonomy.

We just completed the sixth week of our new national security class at Stanford—Technology, Innovation, and Great Power Competition. Joe Felter, Raj Shah, and I designed the class to cover how technology will shape the character and employment of all instruments of national power.

In previous classes, we learned about the elements of national power—a combination of a country’s diplomacy, information, military, and economic strength, along with finance, intelligence, and law enforcement (captured by the acronym DIME-FIL). We also learned about the ongoing strategic competition with China and with Russia. And we discussed the impact commercial technologies have on DIME-FIL, looking first at semiconductor manufacturing before turning to artificial intelligence and machine learning.

In class six, we look at the impact of unmanned platforms and autonomy.

Use of Drones in Nagorno-Karabakh

This class had seven guest speakers on unmanned systems and autonomy.

Our first guest speaker was Rear Admiral Lorin Selby, chief of naval research for the US Navy. Rear Adm. Selby is responsible for the naval research enterprise. It is the venture capital of the Navy and Marine Corps. It’s made up of ONR (the Office of Naval Research), ONR Global, the Naval Research Laboratory, and an office of special projects (PMR 51).

Founded in August 1946, ONR provided support for research at universities when World War II government funding to universities had dried up. Fred Terman, Stanford’s dean of engineering, received ONR’s first research grants for electronics and microwaves. These grants funded the Stanford Electronics Research Laboratory and kickstarted innovation in what would become Silicon Valley. Fast forward to this decade and ONR funded our first Stanford Hacking for Defense classes and is the first funder of the Stanford Gordian Knot Center for National Security Innovation.

Rear Adm. Selby described the role of the chief of naval research, the types of innovation ONR is pursuing, and the role of ONR in capturing new and relevant ideas and pulling them in fast enough to compete with adversaries but not disrupt the functionality of the Navy.

Our next guest was Maynard Holliday the DoD director of defense research and engineering for modernization (5G; artificial intelligence and machine learning; autonomy; biotechnology; cyber; directed energy; fully networked command, control, and communications; hypersonics; microelectronics; quantum science; and space). He described the role of his office as similar to that of DARPA. His eleven principal directors lay out the technical roadmaps for DoD and help transition the technologies into operational use.

The principal DoD modernization director for autonomy, Dr. Jaret C. Riddick, then joined us. He helped the class understand the DoD definition of autonomy, the lines of effort DoD is actively pursuing, and why it was important.

In the Department of Defense, unmanned systems and autonomy are moving ahead rapidly. We gave the students a feel for the scope of the activities being undertaken in two panel sessions.

Rear Adm. Selby, Mr. Holliday, and Dr. Riddick joined a panel discussion on how their organizations set their research priorities and investment strategies. They discussed:

Panel 2 – An Application of Autonomy: The Navy Unmanned Task Force

Four other experts on autonomy in defense joined us for a discussion of the US Navy Unmanned Task Force: Michael Stewart, director of the task force and deputy director, integrated warfare; Bradley Garber, deputy director and principal civilian advisor to the vice chief of naval operations; Dr. Jason Stack, the ONR portfolio manager for autonomy; and Dr. Shane Arnott, chief engineer at Anduril Industries. They discussed: