It’s Thanksgiving, and You Know What? I’m Thankful for the Army. 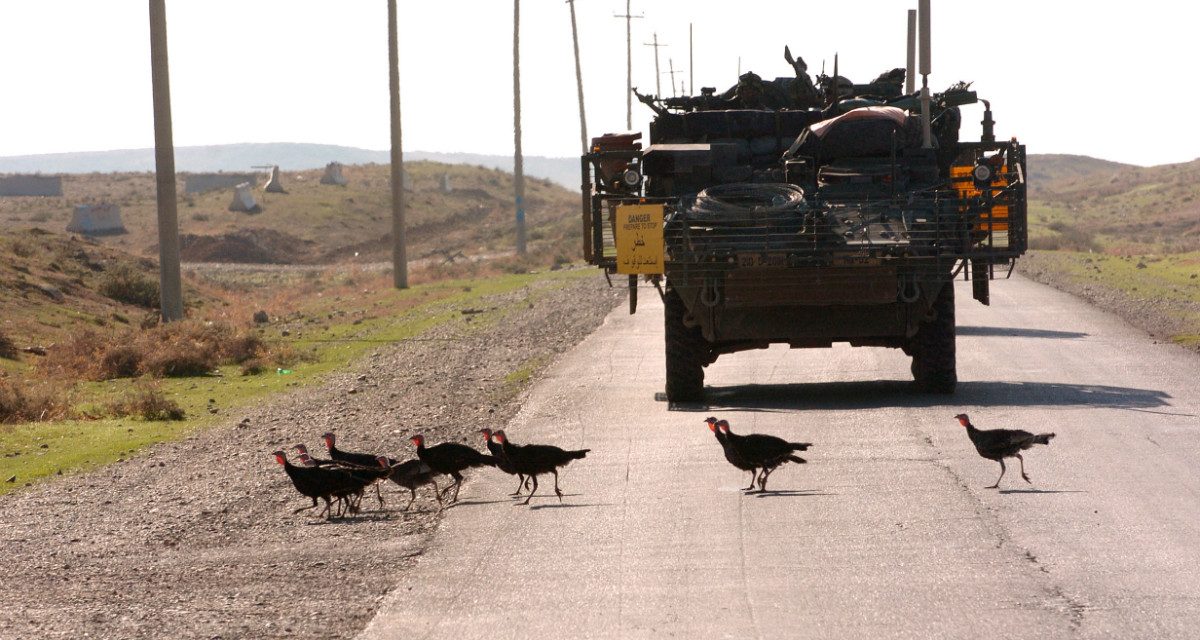 Editor’s note: This article was originally published in 2018.

Several years ago, in Fayetteville, North Carolina, I found myself with some time to kill. I killed it in the best way I know how: by wandering into a bookstore. In search of nothing in particular, I browsed the shelves and picked up whatever caught my attention. I paged through one book after another, reading back covers of others, waiting for something to pique my interest. I only remember one book from that day. This one.

That book was really promising ten reasons not to join the military? And not only that, but excellent reasons? I’ll be honest, I didn’t buy it. I probably only flipped through the pages for a minute or two. And I’m sure I shouldn’t have taken offense. Rationally, I knew the authors weren’t writing this book for me, an audience of one, hoping I’d stumble across it and question the wisdom of my choice to do exactly what they warned against. But still, I realized I was offended—as if the authors felt a moral certainty that I had made a bad decision by joining the Army.

I took a picture of the book so I could show it to an Army friend later. When I showed it to him, we agreed that somebody should write a book making the opposite case—maybe even that we should write it. Well, we still haven’t.

But over the years, it has stuck with me. And this week, thinking through MWI’s editorial calendar around the Thanksgiving holiday, a slightly more attainable target took focus. Maybe I won’t write that book. But I can knock out 1,190 words explaining why—in the spirit of Thanksgiving—I’m thankful for the Army.

Before I actually sat down to write this, though, I needed an azimuth check. So I texted a couple of Army friends I trust to ask whether the article would come off as too cliché, or worse, because MWI is itself part of the Army, as the sort of for-us-by-us, “Go Army” fluff piece that sets uniformed eyes rolling en masse. Especially since many of the people who are reading this now will have come across it on social media, where there’s no small number of people perfectly willing to very diligently excoriate that sort of piece.

But, encouraged by these trusted friends’ advice, I’ll say it: I’m thankful for the Army. Here’s why.

First, there are the people. The Army gave me an opportunity to be a part of an astoundingly diverse workforce. From the moment I first put on a uniform, I was continuously surrounded by people different from me. People from all over the United States, from every conceivable ethnic, religious, and cultural background. And there was no deciding not to be able to work with them. I learned more about empathy and about the power of diverse teams than I could have anywhere else.

I’ve developed lifelong friendships and have been given the opportunity to work with some of the most talented people I’ve ever met. I met one of my best friends at the Minneapolis military entrance processing station before either of us had even gotten our first AAFES haircuts. I’ve had the privilege to work with people whose intellect has impressed me on a daily basis—including here at MWI. I’ve met people whose tireless commitment to the profession of arms, whether or not I agree, has inspired me when I needed it. And I’ve argued with self-styled cynics in uniform—whose cynicism, it should be said, is driven by an equally tireless commitment to making the Army better—and been forced by them to critically evaluate my ideas and sharpen my thinking.

And I’ve had the opportunity to lead American soldiers whose dedication, strength, creativity, and courage I will never, ever cease to be in awe of.

Then there’s the sense of being part of something bigger than yourself. Even the most jaded in our ranks can still recognize the sheer power of that feeling—I’m convinced of it. When I was in basic training, the drill sergeants asked us all why we joined the Army. I replied, with an overly generous dose of pride and intensity, that I wanted to wear the flag on my right shoulder. That description doesn’t do it justice; it couldn’t have been more of a laughably naïve recruit’s answer. But here’s the thing: I still feel it when I put on my uniform.

The Army has problems, to be sure—real problems. Nobody could deny that. And each of us who has chosen to be a part of the Army has an obligation to help correct them. If a diagnosis of those problems is more what you’re looking for today, I trust you won’t have any problem finding plenty of options—many of them written by men and women who wear the uniform. But even those critiques can only be engendered by the type of culture in which an organization’s members care truly and deeply about it.

I have seen soldiers do wonderfully selfless, humane things for perfect strangers. And when they do so, they represent the United States and the Army. Perhaps nothing in my life has made me more proud to be an American or to be part of the Army than witnessing those episodes.

The Army also gave me an opportunity to travel. Before I joined, my international travel was, um, limited. I had been to Winnipeg. My first deployment, to Baghdad, sparked a life-changing interest in the world and its people. I can trace almost everything I’ve done since to that deployment. I remember one night, at a joint security station (essentially a local police station with a small contingent of American troops) sitting and leaning against the exterior T-walls and listening to one of my interpreters talk to me about Iraq. Not what I knew from watching TV coverage of the war effort there. Not even what I knew from my own experiences there during that deployment. But his nuanced views and unique perspective about his country. That conversation, and a hundred other experiences from that year in Baghdad, instilled in me a curiosity about places and the people who live there. Because of it, I have had similarly fascinating discussions in every place I’ve traveled, from Sweden to Somaliland. (I was in Sweden, incidentally, at a conference I was taking part in because of a job I wouldn’t have had if I hadn’t joined the Army; I was in Somaliland conducting research I wouldn’t have been involved in if I hadn’t joined the Army.)

There’s more. Morning PT strengthened my commitment to health and physical fitness. An institutional dedication to core values has made me a better person. The opportunity to do different jobs has forced me out of my comfort zone again and again, made to learn new and wide-ranging skills. Even the frequent moves and travel has made me more able to adapt easily to new environments. Come to think of it, there might be enough for a book, after all.

But for now, today, on Thanksgiving, I’ll just leave it at this: I’m thankful for the Army.