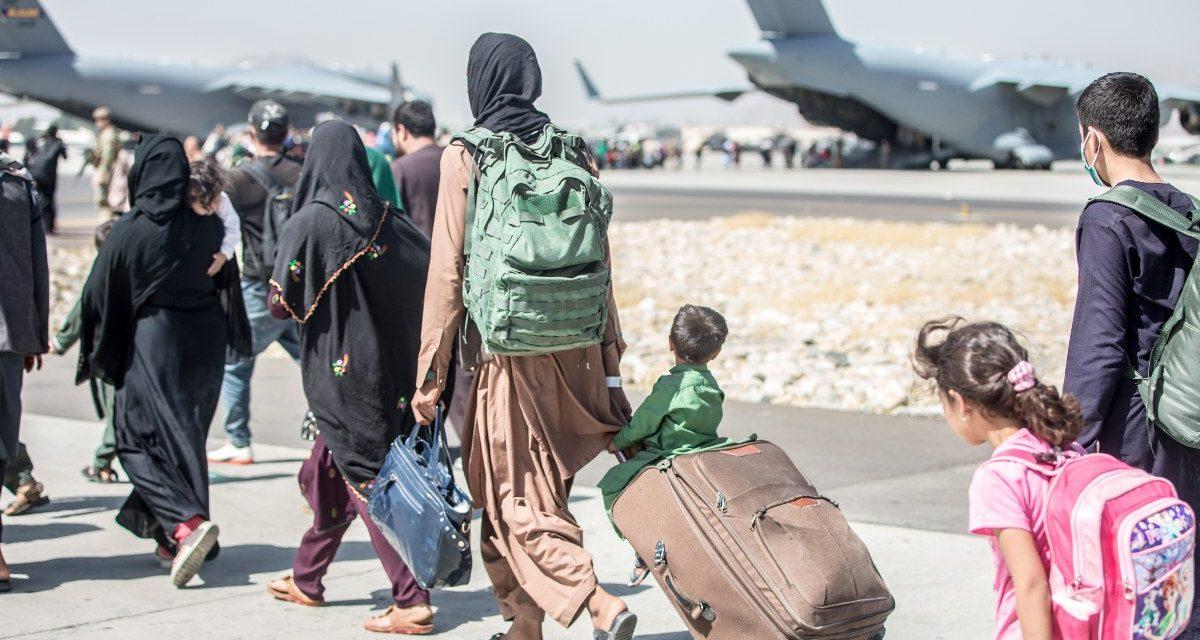 War plays tricks. Its cruelest trick is making participants, individuals and countries alike, think they can walk away from conflict on their terms.

After multiple deployments to Afghanistan, Elliot Ackerman left his military service behind him to embark on what would become a successful literary career. Like many veterans, Ackerman believed he could depart war on his terms, but the collapse of Kabul in August 2021 drew him—and others—back into its grasp. In his new book The Fifth Act: America’s End in Afghanistan, Ackerman documents the maddeningly frantic, tragic, and sometimes triumphant actions that assisted in evacuating Afghan citizens as the Taliban tightened its vice on Kabul. In telling the story of the Afghan airlift, Ackerman pulls back the curtain on the two decades of conflict that this episode punctuated.

Ackerman takes the readers to Arlington National Cemetery’s Section 60, Farah province in Afghanistan, and the E-Ring of the Pentagon before framing the chaotic final days of the Kabul evacuation. His rendering of the events of August 2021 and his service paints a compelling picture of why the Afghan airlift was urgent and why so many veterans dedicated themselves to the task of facilitating the exit of Afghans they knew, who they had worked and fought side by side with to secure and stabilize a country rapidly and violently returning to the status quo ante bellum. How Afghanistan ended will mar America’s memories of the war, the longest in our nation’s history.

During a family vacation in Italy, Ackerman remained glued to his cell phone, monitoring multiple chats on the Signal messaging app and coordinating the evacuation of Afghan citizens with others drawn together by their service. Ackerman’s cadre banded together as the Afghan government dissolved in days, overwhelming the American military’s ability to manage their withdrawal and a mushrooming humanitarian crisis.

Not only did the Afghan government collapse, but so did time, space, and hierarchy. Ackerman captures how the rapid succession of events threw him and his team “back into that conflict with an intensity as though [they’d] never left.” The individuals coordinating the evacuation were located across the globe, relying on a loose but growing network of Americans anxious to move Afghan citizens to safety. Hierarchy collapsed, neither current station in life nor former rank mattering. At one point, Ackerman, who left the Marines as a captain, fielded calls from flag officers and billionaire families desperate to secure the safe passage of Afghan citizens.

The Fifth Act is not without flaws. The book discusses the corrosive effect of the widening civil-military divide, for example—a problem that has such wide implications it isn’t unnatural that it would appear in the book. Yet the section spent on the events of January 6 and the rancor in Washington will feel like a digression to some readers, detracting from the overall compelling narrative of the Afghan evacuation and Ackerman’s service in Afghanistan. If I were to truly nitpick, I might also suggest that including maps in the sections where Ackerman describes his time as a Marine Forces Special Operations Command (MARSOC) team leader in Farah province would have given the reader a better sense of scale regarding the complexity of his team’s mission. Even without the maps, his description of the MARSOC team enhances the narrative and highlights the underreported contributions in western Afghanistan.

Still, Ackerman’s work explores the war’s final moments in a way that contextualizes the entirety of the two decades of America’s post-9/11 wars. Ackerman seeks to stimulate and shape the conversation on how generational memories form when clouded by wars that did not achieve their stated ends. Since the 2017 congressional bill directing the study of a war on terrorism memorial, the country has grappled with how best to commemorate the wars in Iraq and Afghanistan and the American men and women who lost their lives there. Ackerman proposes combining all war memorials into one single wall with the names of the fallen etched in marble. When the president signs a decree committing troops to future war, he or she would do so next to the name of the last fallen combatant. The Fifth Act is a critical contribution to how America commemorates the war in Afghanistan, and how our collective memory of that war should influence decisions to commit American service members to future wars.

This is the heart of a question yet to be answered: How will America remember a failed war? The searing images from Kabul airport in August 2021 left an indelible mark on the generational memory of Afghans, just as Saigon did for the Vietnamese a generation before. The weeks-long withdrawal featured images of Marines cradling Afghan infants in their arms; evacuees running alongside a taxiing C-17; an Afghan falling to earth after losing his grip on the landing gear in a desperate attempt to stow away; and a grainy, green, haunting image of a US Army general entering an aircraft, the last US service member leaving the country and marking the end of the war. However, these photos do not paint the complete picture. Ackerman fills in the gaps by providing transcripts of the Signal chats and pictures of Afghans who secured safe passage. These images are vital as the country forms its memories of the tragedy and triumph of America’s war in Afghanistan. As the first anniversary of Kabul’s fall approaches, Ackerman provides us with a guide to commemorate, mourn, and learn from Afghanistan.

After two decades of war, Ackerman, and his compatriots involved in the evacuation, many of whom had served in special operations and the CIA’s paramilitary program, now relied on enlisted personnel at the Kabul airport. Ackerman commissioned as a Marine Corps officer in 2003. Some of those service members he relied on last August were born after the 9/11 attacks. There may be no more poignant reminder of just how extensively this longest of all US wars touched American men and women in uniform than the Afghan airlift and, as Ackerman’s book makes clear, how it now links these generations together.

In 2015, Ackerman’s first novel Green on Blue was published. It opens with the Afghan narrator stating, “Many would call me a dishonest man, but I’ve always kept faith with myself. There is an honesty in that, I think.” In many ways, the themes of that single line—honesty, dishonesty, keeping faith with oneself (and others)—would have made for a suitable epigraph to this book, as well. America’s war in Afghanistan will forever be marked by deception and risk masking. As Kabul descended into chaos and overwhelmed the American military, Ackerman and others, guided by the preservation of honor, stepped into the void. Thus, the final act of America’s war in Afghanistan is complete.

After nearly two decades in which the conflict’s diffused nature made it a war of small units, platoons and companies largely isolated from one another and grappling with the unique challenges of the particular slivers of Afghanistan for which they were responsible, the Afghan airlift fused all veterans of Afghanistan together in a cauldron of chaos. And yet regardless of their tactical or operational successes during the war, the failure to achieve strategic success will overshadow their honorable service. The fall of Kabul will crystallize how America remembers the war. But there are two sides to that coin. On one hand, the images of a hasty withdrawal will be remembered as the culmination of a war in which strategic success remained forever out of reach. On the other, the actions of Americans—including and especially veterans like Ackerman—supported Afghan citizens in their hour of need and afforded refugees a better future. In that regard, the withdrawal reflects the reality of a long war in which competing interpretations of events, competing narratives about the war’s conduct and its progress, existed side by side, neither more accurate than the other.

Ultimately, as Ackerman’s account of the difficult end of a difficult war makes clear, the end of the war did not change the participants but revealed their character.

Major Benjamin Van Horrick is a US Marine Corps officer based at Fort Leavenworth, Kansas. He has served on fours overseas deployment.