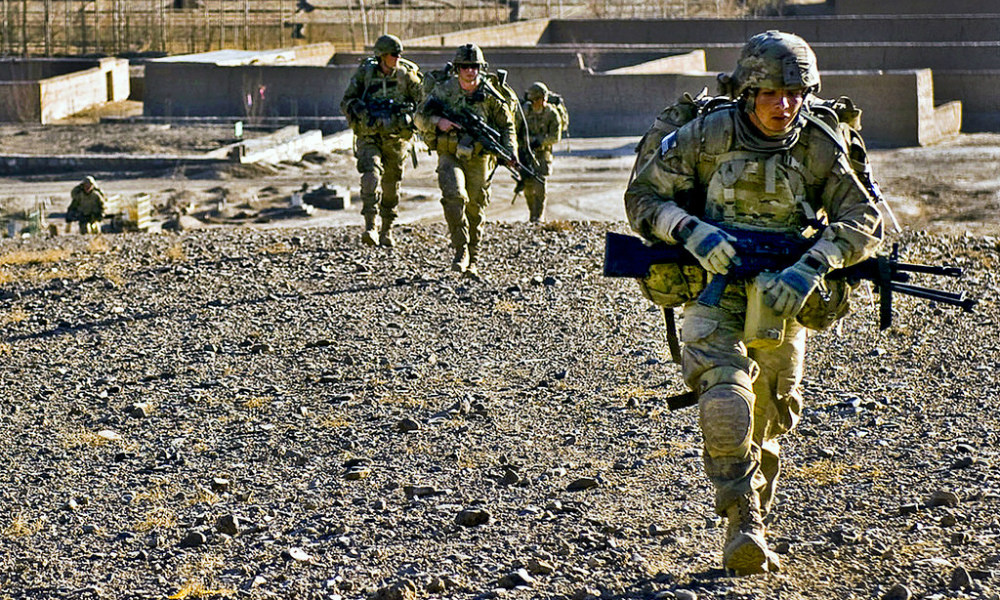 The Infantry has a weight problem. The amount of weight soldiers or Marines are asked to carry has grown exponentially while their ability to carry that load has not. This issue was brought to the forefront recently when retired Army Col. Ellen Haring wrote an opinion piece for the Marine Corps Times in which she was critical of the requirement for Marine Corps infantry officers to carry a load of up to 152 pounds for more than nine miles, at a twenty-minute-per-mile pace—a standard that Haring argues is unrealistic and prevents women from successfully completing the Marine Corps Infantry Officer Course. At first glance this may seem like a reasonable argument: 152 pounds seems like more than most humans can carry.

Many of the rebuttal articles, including one on Tom Ricks Best Defense blog by former Marine infantryman Aaron Ferencik, state that not only is this a realistic requirement, it happens regularly in Afghanistan. Ferencik writes that he was required to carry almost 200 pounds of gear, armor, and weapons.

Despite the robust back-and-forth argument related to the 152-pound Marine Corps standard that was spawned by Haring’s piece, one fundamental question was never answered: What is the right amount of weight an infantryman should be reasonably asked to carry? And how do we get these loads down to a reasonable weight that allows the infantry to be a flexible and agile force?

How did we get here?

From the ancient Greek hoplite all the way up through the American Civil War infantryman, the overall weight carried by a foot soldier changed very little, holding steady at about forty pounds. Infantrymen didn’t see a significant jump in their load until the beginning of the twentieth century. During World War I infantry loads increased by 50 percent, up to over sixty pounds. World War II saw those loads increase again, to 80–100 pounds, depending on the type of weapon system the soldier carried.

Soldier loads stayed pretty constant from World War II through Vietnam. In the last thirty years, however, loads have skyrocketed. During the operation in Grenada soldier loads went unchecked by leaders, resulting in soldiers carrying over 120 pounds. In their paper Load Carriage in Military Operations, Joseph Knapik and Katy Reynolds quoted one soldier in Grenada: “My rucksack weighed 120 pounds. I would get up and rush for 10 yards, throw myself down and couldn’t get up. I’d rest for 10 or 15 minutes, struggle to get up, go 10 more yards, and collapse. After a few rushes, I was physically unable to move and I am in great shape.”

The story hasn’t changed much since then. In the video below, a soldier steps up on a scale to illustrate how much he carries on a two-day mission. With weapon, body armor, and pack his gear weighs in at over 130 pounds.

The British Army has had similar problems. In 2011, a senior British Army officer wrote that the Taliban refer to British soldiers as “donkeys” who move in a tactical “waddle” because of the weight they carried in Afghanistan, which averaged 110 pounds. The officer continued, explaining that “our infantry find it almost impossible to close with the enemy because the bad guys are twice as mobile.”

What should a combat load weigh?

How much should a soldier carry? Many studies have been done on this subject by both the Army and Marine Corps. The Marine Corps Combat Development Command’s 2003 Combat Load Report cites S.L.A. Marshall’s book Soldier’s Load and the Mobility of a Nation as the go-to source on the subject. Marshall concludes that a soldier could optimally carry 33 percent of his body weight. The same Marine Corps study determined the average weight of a Marine male was 169 pounds and the average female’s was 130 pounds. This would put their combat loads at 56 pounds and 42 pounds, respectively.

The Army field manual on foot marches, FM 21-18, which has not been updated since 1990, does not take into account individual body weight. It prescribes a fighting load of no more than 48 pounds and an approach march load of 72 pounds. There is, however, a caveat to those weights. The manual states, “The primary consideration is not how much a soldier can carry, but how much he can carry without impaired combat effectiveness—mentally or physically.” This essentially bases a determination about the amount carried on individual capabilities.

Soldiers today are consistently carrying loads into combat that weigh 70–100 pounds more than what Marshall or the Army field manual prescribes. This over-burdening has significantly hindered soldiers’ and Marines’ ability to effectively maneuver on the battlefield. So how do we get soldier loads closer to these prescribed weights?

There are two potential technological solutions to this problem. The first is to provide assistance in carrying the weight. Up until World War I, armies used beasts of burden to assist in carrying some of their equipment. With the advent of the combustion engine armies turned to trucks and other combat vehicles. The problem is these solutions tie the infantryman to roadways, restricting movement. Getting the infantry away from roads is vital to their ability to effectively maneuver against the enemy requiring innovative solutions.

Several companies are working on robots that can follow behind a maneuver formation. These robots would carry the packs of several soldiers, leaving the infantrymen to carry only their basic combat load of ammunition and body armor. Reducing soldiers’ carried weight to this basic combat load would significantly increase their maneuverability on the battlefield and survivability in a fight.

Another concept under development is a wearable exoskeleton. This would allow soldiers to continue to carry their own loads but with the load-bearing assistance of a hydraulic-powered system attached to a soldier’s legs. Infantrymen would thus retain the same equipment they currently carry on the battlefield, but the exoskeleton would reduce fatigue and the consequent erosion of combat effectiveness.

Unfortunately, none of these systems are ready for combat. Problems with noise, the ability to traverse rugged terrain, maintenance, and the amount of actual weight they can carry have prevented these systems from being issued to combat units. Noise was the biggest concern for Marines. They felt, and rightfully so, that a robot with a lawn mower engine following behind their formation would easily give their position away. Until the noise and other problems are solved, these systems will remain impractical for soldiers on the battlefield.

The other way to attack this problem is to reduce how much the things a soldier carries weigh. On today’s battlefield the two main culprits are batteries and body armor. Almost everything a soldier carries today requires batteries, which can add almost 20 pounds to their load—a problem soldiers have only contended with in the past generation. One solution to the problem is the use of solar panels like the Marine Austere Patrol System being developed by the Office of Naval Research. These lightweight panels would allow soldiers to recharge batteries on the go and reduce the total amount of batteries needed per mission.

Body armor is another area where the military is looking at to reduce weight. The current Improved Outer Tactical Vest weights over 30 pounds. The Army is planning to begin issuing a new system of body armor in 2019 that weighs in at around 23 pounds. Additionally, plates can be removed to tailor the system to the mission, potentially reducing weight even more.

Where do we go from here?

The potential solutions identified above are great starting points but more can be done. Many of these technologies are still in their infancy and not quite ready for combat. While not as sexy as a new fighter jet or aircraft carrier, more resources should be allocated towards the objective of reducing a soldier’s load. Doing so will directly impact battlefield performance. A fighter jet cannot seize and hold terrain, but then neither can infantrymen who are so overburdened that they can’t maneuver effectively on the battlefield.

Major James King is currently serving as a Brigade Senior Intelligence Officer (S2) for a Stryker Brigade Combat Team in Alaska.  While serving over 20 years in the National Guard, Army Reserve, and Active Army, MAJ King has held multiple leadership positions in the Military Police, Infantry and Intelligence fields as well as deploying three times in support of Operation Iraqi Freedom.  Major King holds a BA in Sociology from the University of Washington where he earned his commission through the ROTC program and a Master’s Degree in Strategic Intelligence from American Military University. The opinions here are the author’s own and do not reflect the policy of the U.S. Army, Department of Defense, or any government agency.