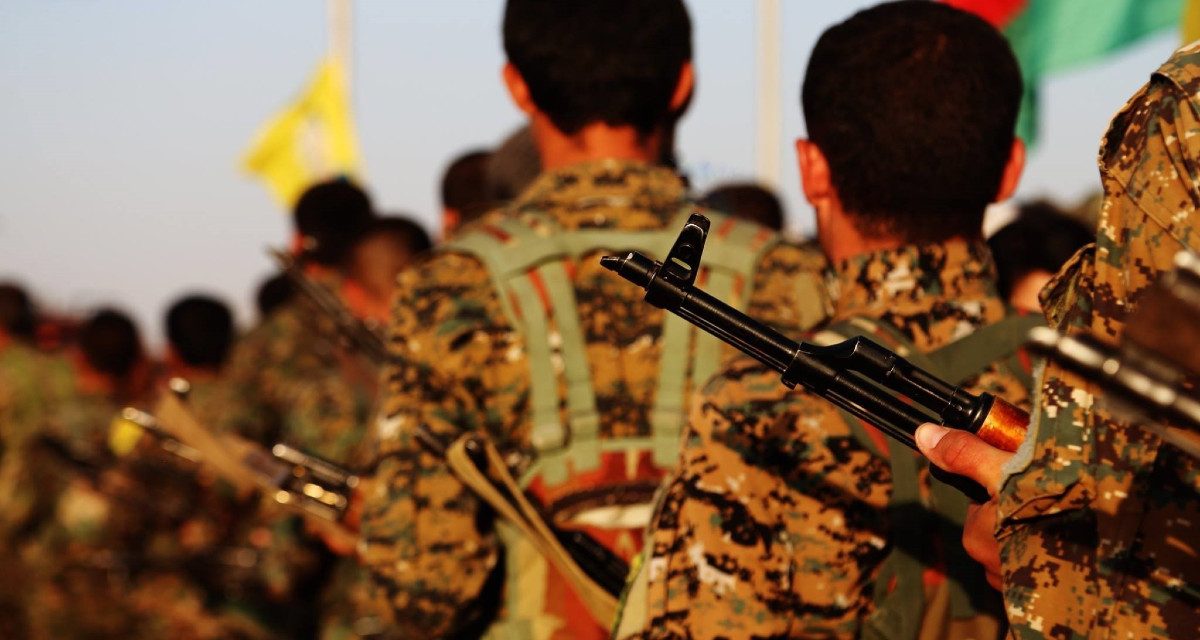 Editor’s note: This week, the Modern War Institute and the Lieber Institute for Law and Land Warfare hosted a multi-disciplinary panel discussion on proxy warfare. One of the panel participants, Maj. Alex Deep, coauthored this article with Yelena Biberman describing the risks of proxy warfare and delineating the considerations that should be taken into account in crafting US strategy regarding the use of proxies. Both authors are MWI fellows.

MWI’s partner in hosting this event, the Lieber Institute, has published a companion article authored by another of the panel participants, British Army Maj. Jennifer Maddocks, which analyzes some of the legal issues surrounding the use of proxies.

Proxy conflicts are all around us. From Ukraine to Syria to the South China Sea, great and regional powers alike are using proxies to achieve their national interests abroad. There is a certain allure to what President Dwight Eisenhower once called “the cheapest insurance in the world”—that is, the idea that we can use proxies to fight our wars without spending a lot of blood or treasure in the process. The perceived Russian and Iranian savvy with proxies and our own success using them against ISIS have given policymakers rose-colored glasses when it comes to outsourcing military operations more extensively. Prior to becoming the forty-sixth president of the United States, Joe Biden opined that:

We can be strong and smart at the same time. There is a big difference between large-scale, open-ended deployments of tens of thousands of American combat troops, which must end, and using a few hundred Special Forces soldiers and intelligence assets to support local partners against a common enemy. Those smaller-scale missions are sustainable militarily, economically, and politically, and they advance the national interest.

Unfortunately, it is never that easy. Proxies present a difficult dilemma for the state sponsor. While they may offer deniability and a way to pass the burden of conflict to a third party, states must invest more in terms of money and soldiers if they want to ensure that proxies pursue state goals rather than their own. If states fail to rein in proxy behavior, the results can be costly and lead to the commitment of more resources to a deepened or expanded conflict. In addition, states can suffer reputational damage at home and abroad if proxies start committing human rights violations. This dilemma is particularly acute for the United States and our allies, which tend to care more about international law, human rights, and war crimes than some of our adversaries like Russia, China, and Iran. Despite these incentives to control proxy behavior, committing the resources required to do so seemingly counters the benefits that proxies provide in terms of cost savings and plausible deniability.

The Problem with Proxies

The outsourcing of military operations to state or nonstate proxies presents a host of tactical, logistical, strategic, political, legal, and ethical challenges. What Machiavelli observed about mercenaries and auxiliaries—that they are “dangerous . . . disunited, ambitious, and without discipline, unfaithful”—can apply to any group that has its own motives, especially when those motives include profit.

Proxies are difficult to control even when their motives align with those of their sponsors. They can, for example, take it upon themselves to go above and beyond the mission’s objectives. This was the case with Operation Condor, when Brazilian military and political elites, in collaboration with their regional allies, took it upon themselves to prosecute a cross-border program of repression against suspected communist, socialist, or even merely left-wing critics of each other’s authoritarian regimes. Operation Condor received support from the United States, but it went into overdrive particularly when the Latin American authoritarian regimes suspected Washington of going soft on communism under the newly elected president, Jimmy Carter.

Finally, there has been inadequate debate and reflection about the way the United States has used proxies in the past. Proxy warfare figured prominently during the Cold War. New work is shedding important light on the ways in which the United States cultivated and worked with friendly military officers in developing countries to marginalize anti-colonial forces. It applied what came to be known as the “Jakarta Method,” mass killings, abductions, and, more broadly, repression of left-leaning civilians through close collaboration with anticommunist military and paramilitary forces, as well as civilian groups.

Ahistorical treatment of proxy warfare, which ignores its role in political repression and genocidal violence, risks repeating the darker chapters of our history and legitimizing similar behaviors by other counties. Abuses carried out by our proxies also make us morally indistinguishable from our adversaries, thus undermining our key comparative advantage. Plausible deniability may seem like an attractive benefit of proxies, but few secrets stay hidden. If we use proxies who break rules that we would ourselves not want to be known for breaking, the effect is to undermine those rules. And, in a world in which US primacy is on the decline, it is worth considering how those rules stand to benefit us as well.

An American Way of Proxy War

Recognizing all the risks of proxy warfare, states still choose to use proxies for a variety of reasons. Beyond the potential to limit cost and the ability to claim plausible deniability, proxies offer states a way to limit escalation and to intervene in areas politically problematic for regular forces. In addition, since proxies tend to be local, they have a better understanding of human and physical terrain, local political and social dynamics, and sources of intelligence, all of which are vital to execute a successful military campaign. However, a state risks starting to view proxies as an easy button to achieve political goals for which it would not otherwise use its military. In other words, proxies become a way to avoid difficult political deliberations about the use of force.

The United States should not have such a bias for action when it comes to using its military, whether “large-scale, open-ended deployments of tens of thousands of American combat troops” or “a few hundred Special Forces soldiers and intelligence assets to support local partners against a common enemy.” As countries like Russia and Iran increasingly flex proxy muscles in the Middle East, Eastern Europe, Africa, and the Caucasus, there is a tendency for the United States to seek to respond in kind. This mindset produces a strategic process that views national security challenges through a prism of violence. The solution to these challenges becomes first, to use a proxy if possible; second, if a proxy does not work, to use other forms of coercive national power, namely in the diplomatic, economic, and informational space; and third, if none of that works, then to use traditional military force. However, that process assumes that proxy war is an inherently better option than other elements of national power, including more conventional military intervention.

Rather than defaulting to proxies, the United States should treat them as one option among many. When the United States does decide to use proxies, it should not employ the Russian or Iranian model, which are both replete with problems. Russia’s proxies in Syria have regularly committed atrocities against civilians throughout the almost decade-long civil war, and the regime of Bashar al-Assad that Russian proxies support still does not control significant parts of the country. Russia has no qualms about relying on unwieldy mercenaries from the Wagner Group to do its dirty work not only in Syria, but also Ukraine, Libya, and throughout sub-Saharan Africa. The Wagner Group commits war crimes with reckless abandon, and the means by which the Russian state controls its activities are convoluted, normally through oligarchs whose connections to the Russian state are based on wealth and corruption. For Iran, the Islamic Revolutionary Guards Corps – Quds Force recruits, trains, and employs a variety of Shia militia groups in the Middle East. However, Iran has a difficult time controlling the behavior of this disparate band of proxies and recruitment tends to be limited to Shias. It would be very difficult for Iran to recruit effective proxies in parts of the Middle East, much less beyond the region.

An American way of proxy warfare should include three fundamental principles, drawing on its advantages over the methods of our adversaries in the same competitive space. First and foremost, we must view proxy warfare as part of a broader irregular warfare strategy—that is, a struggle among state and nonstate actors over influence and legitimacy. We compete in this space through a range of expeditionary, partnered operations, including proxy warfare. Next, we must leverage the appeal of our partnership versus that of our adversaries. We are a diverse nation (and military) with connections to peoples and cultures all over the world. Furthermore, we do not ask our partners to follow a certain religion or ideology. Our pragmatism and diversity allow us to recruit, train, and employ a wider range of potential partners compared to China, Russia, or Iran. Few audiences are closed to the potential of American partnership.

Finally, the United States cannot view proxies as a true replacement for our special operations practitioners of irregular warfare. On the contrary, we must be willing to deploy soldiers, intelligence operatives, and diplomats into harm’s way to control proxy behavior and avoid the principal-agent problem that plagues proxy warfare. We do not have the luxury our adversaries do, of dismissing either the misdeeds of our proxies or how their actions may affect regional political dynamics. American foreign policy is a constant struggle between idealism and realism. That makes us fundamentally different than China, Russia, or Iran. Those states can choose to ignore war crimes and humanitarian abuses; we cannot and should not.

By following these principles of an American way of proxy warfare, we can avoid the pitfalls of proxies, while leveraging their benefits in an environment where strategic competition and irregular warfare go hand in hand. We also must be willing to expand our sense of proxy warfare beyond the physical space and include the information environment and cyber domain.

The United States is currently at a crossroads, trying to figure out which path to pursue in the rapidly changing world. Some argue that its global mission should be to contain neo-authoritarianism, while others advocate for the less intensive “offshore balancing” approach, or focusing on preventing the rise of hegemons in key regions. There are also those who say we ought to prioritize getting our “political and economic house in order rather than going abroad in search of monsters to destroy.” Local partners are likely to play a role in each scenario; however, the questions of how to use these partners most effectively and when to rely upon them rather than our own capabilities have not been fully considered. They should be.

Maj. Alex Deep is a US Army Special Forces officer and a fellow at the Modern War Institute at West Point. He has deployed multiple times in support of combat operations in Afghanistan and Syria as a member of 3rd Special Forces Group and was previously an assistant professor of international affairs at the United States Military Academy.

Yelena Biberman is an associate professor of political science at Skidmore College, a fellow at the Modern War Institute at West Point, and a nonresident senior fellow at the Atlantic Council’s South Asia Center in Washington, DC. Her book, Gambling with Violence: State Outsourcing of War in Pakistan and India, was published by Oxford University Press in 2019.