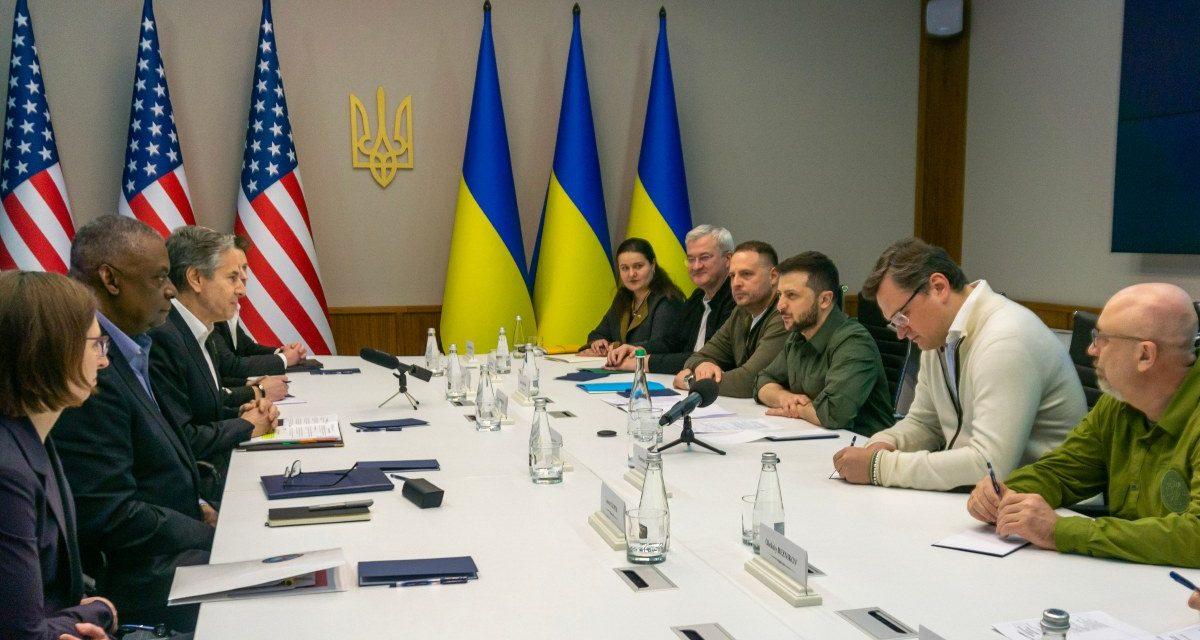 Twisted metal, still smoldering; the eviscerated hull of a vehicle, its top half ripped off—this is what the Turkish Bayraktar TB-2 leaves in its wake. There were two such drones involved in this attack on a Russian armored column north of Kyiv—quite a bargain for the West at just under $2 million a platform.

By contrast, the much-vaunted Javelin and NLAW, both man-portable antitank guided missiles, belong to a previous era. They require an operator (or two, in the case of the Javelin) to ambush armored vehicles within the adversary’s weapons engagement zone. Their high success rate here in Ukraine owes everything to designer defects in Soviet-era armor.

The Russian BRDM armored reconnaissance vehicles are made of aluminum alloy, which burns incandescently after contact with a high-explosive round. And the manufacturer of the T-72 tank overlooked one fatal design defect: the tank’s ammunition is stored below the crew spaces without a hardened bulkhead for insulation. Even a rocket-propelled grenade fired from the flank will result in a catastrophic kill more often than not. Both these flaws are a result, in part, of the corruption and incompetence endemic throughout the Russian military procurement system—and have proven to be a great benefit for the defenders of Ukraine.

Why doesn’t the United States produce a blue-collar drone like the TB-2 for export? The answers are complex. Since July 2020, there have been no legal restrictions on the export of such a platform. But the US defense industry has no incentive to manufacture a low-cost drone with similar capabilities to the TB-2, and the Pentagon has yet to send a demand signal. As a result, Turkish and Israeli firms dominate the market—two countries whose national interests do not always overlap neatly with those of the United States.

While the United States has so far provided the Ukrainians with few drones, it has provided heavier weapons and tens of billions of dollars in aid. But the provision of military aid to Ukraine does not appear to be aligned with battlefield requirements. Instead, the United States is throwing money at the problem in the hope that sheer expenditure will bring results. It is a mistake to conflate expenditure and resources with targeted capability. Military aid should be focused on actual requirements—and it is here where US policy breaks down.

The need for long-range precision fires is one example. The United States has made little attempt to meet this requirement, beyond the much-heralded M777 howitzer, which is in fact obsolete. The M777 is outranged by Russian rocket artillery, which has a proven ability to respond with counterbattery fires within five minutes—less time than it takes a battery of M777s to displace.  There has been no serious discussion of providing the Ukrainians with the Multiple Launch Rocket System or long-range strike drones such as the MQ-9 Reaper or even its older cousin the MQ-1 Predator, perhaps because both these platforms cost considerably more than the TB-2—the unit cost of an MQ-9 is over $30 million.

Nor has NATO fielded logistics drones to meet the Ukrainian military’s requirement to resupply units cut off by Russian forces. Cargo drones such as the US K-MAX or the British Maloy T150 could well have prevented the fall of Mariupol’s garrison. Ukrainian helicopters did made it through the gauntlet of Russian air defense systems, but the risk of losing air crews made this method of resupply prohibitively expensive. It would have been a relatively simple task to flood the air with decoys such as cheap commercial drones, like the various models manufactured by DJI, overwhelming Russian air defenses, while a handful of logistics drones delivered vital supplies that would have allowed the garrison to fight on indefinitely.

Moreover, a policy that simply pushes logistics without any “pull” or supervision to ensure distribution according to prioritization of need simply does not work. A handful of US contractors in country could have made a world of difference in this regard—and it is hard to imagine that the deployment of a few personnel tasked with coordinating distribution would constitute a red line triggering World War III. Instead, the Territorial Defense Forces, the Ukrainian reserves in the west of the country, are often well-equipped while units on the front line go short of everything. Is this corruption? Perhaps—but from what I have seen it is simply a case of commanders trying to take care of their own, not realizing that there is only a limited amount of US largesse to go around.

The United States needs to reassess the equipment it plans to provide under its recently announced $37.4 billion aid package. The proposed package includes towed howitzers, Soviet-era helicopters, armored personnel carriers, and surveillance drones. This equipment is intended simply to replace Ukrainian losses but will make relatively little difference on the battlefield. It is as though Washington is deliberately avoiding giving Ukraine a qualitative military edge over Russia by providing its military what it really needs: squadrons of strike and logistics drones (along with counterdrone systems), battalions of rocket artillery with counterbattery radar, and anti–air defense systems.

There are clearly concerns about escalation at play, but there is little logical distinction between a weapon that kills tanks one mile away, as man-portable systems such as the Javelin are capable of doing, or fifty miles away, as only a long-distance strike drone can do with certainty. The difference to the operator, however, is significant. And Washington needs to understand that in any conflict between democracy and autocracy of the sort playing out in Ukraine, US interests are at stake. It needs to embrace the real prospect of Ukrainian victory—and to understand that such an outcome is the only one acceptable, not just for Ukraine but for global perceptions of the rule of law between sovereign nations and of the role that the United States plays in upholding such a thing. A Ukrainian victory will bring with it the opportunity for a massive international reconstruction program, EU membership, a buffer against further Russian aggression, and a totemic watershed for the global rule of law.

A ceasefire or stalemate, by contrast, would leave Ukrainians under Russian occupation, subject to torture, rape, and execution. It would enable the Russians to regroup and rearm. It would allow Putin to claim victory, to posture and reposition for further offensive action. In short, it would be a de facto defeat—sending the world a message about the power of autocracy on the global stage, and a sobering reminder that a partnership with the United States can, in real terms, mean very little indeed.

Andrew Milburn retired from the Marine Corps as a colonel in 2019 after a thirty-one-year career. His last position in uniform was as deputy commander of Special Operations Command Central, and prior to that, commanding officer of the Marine Raider Regiment and Combined Special Operations Task Force – Iraq. Since retiring, he has written a critically acclaimed memoir, When the Tempest Gathers, and articles for The Atlantic, USA Today, Joint Forces Quarterly, and War on the Rocks, in addition to the Military Times. He is on the adjunct faculty of the Joint Special Operations University and teaches classes on leadership, planning, ethics, command and control, mission command, risk, special operations, and irregular warfare at US military schools. He is a cohost of the Irregular Warfare Podcast.