There’s a Big Problem Limiting US Interoperability with Allies: Here’s How to Fix It 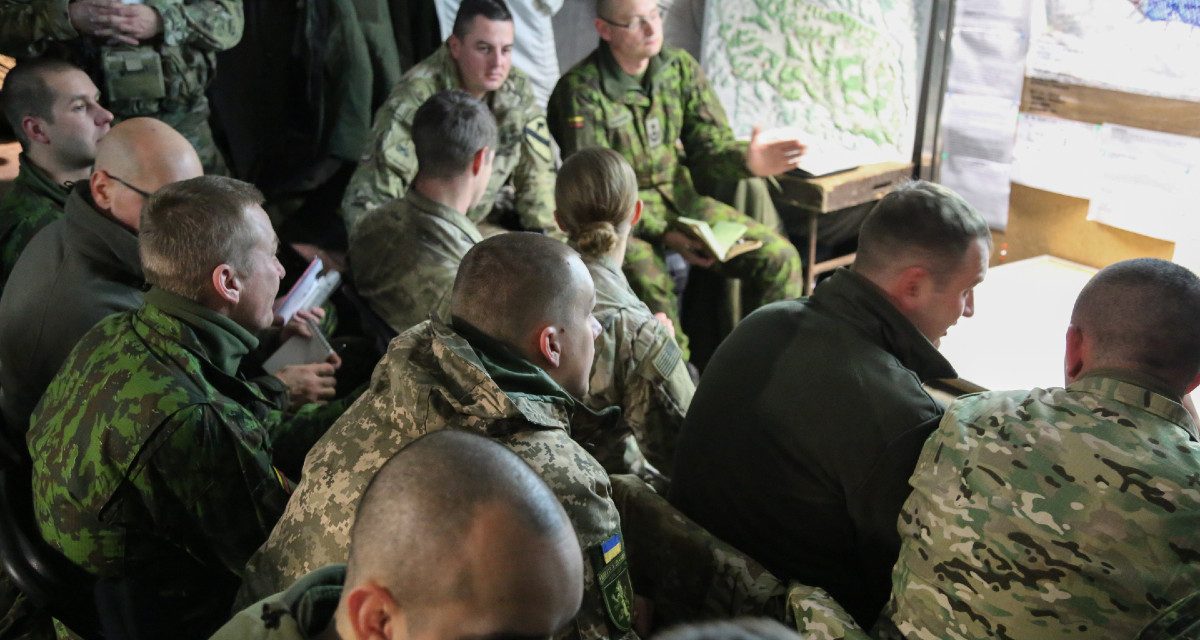 The United States military is woefully unprepared for a critical element of the wars to come. The issue isn’t one of weapons systems or equipment, physical fitness or doctrine—it’s one of process. Despite an enormous network of allies and partners around the world, and nearly two decades of continuous multinational military operations, members of one of the key groups of people who actually make such cooperation possible are understaffed, overworked, and all but impossible to find in the bureaucracy. These professionals, known as foreign disclosure officers, are the ones who write, interpret, and apply the rules and policies that govern sharing (or disclosure) with foreign partners. In essence, if process is the US military’s valentine to partners, disclosure officers are their cupids.

As it stands, the United States military trains disclosure officers, but it has almost no way to keep track of them. Consequently, a critical force multiplier is lost. Creating skill identifiers within the services is a low-cost way to rectify this using authorities and processes that already exist in doctrine and law. Moreover, by doing so, the services would meet key objectives of the National Defense Strategy and the National Military Strategy while strengthening interoperability and enhancing lethality of its alliances.

Churchill’s point about fighting with allies—that the only thing worse is fighting without them—is well taken. Major combat operations—to say nothing of the protracted campaigns required in a peer conflict—are expensive and devastating. Having allies can help deter conflicts and offset some of the costs when deterrence fails. The United States’ renewed focus on great power competition underscores this view. Competing in the contemporary global operational environment cannot be done easily, cheaply, or alone. The 2018 National Defense Strategy recognizes that the United States’ “network of alliances and partnerships remain the backbone of global security.” The new administration will update strategy documents, but the primacy of great power competition and the importance of allies and partners will remain the same. Thus, expanding the ability to work closer with allies is critical if the military is to fulfill future missions.

Closer integration with allies will require an increase in all kinds of information and technology sharing. Disclosure officers are responsible for reviewing and approving the disclosure and release of all classified information “through approved channels to an authorized representative of a foreign government or international organization.” The 2018 National Military Strategy emphasizes the importance of joint force interoperability with allies and partners. Seamlessly sharing information at every level is essential to combined operations and disclosure officers are essential to the sharing process. Equally, the National Defense Strategy highlights the need for improved talent management in order to efficiently meet global threats. Creating skill identifiers is a low-cost option using existing authorities to accomplish these goals.

What’s in a Skill Identifier?

Each service has its own way of administratively distinguishing special skills. The Navy uses tracking Navy enlisted classification codes, the Air Force uses special experience identifiers, and the Army uses a range of skill identifiers. Each of these mechanisms is designed to give the services flexibility in talent management to leverage servicemembers’ niche skills, training, and experience. Services maintain unique standards for creating a skill identifier, yet three broad criteria are common to all:

The knowledge required to be a disclosure officer is sufficiently specialized to merit a skill identifier. For any product to be approved for release, disclosure officers are required to evaluate its contents against existing policy. A myriad of regulations and policies from the services, Department of Defense, and other agencies must be taken into consideration. There is no easy button for doing this. Someone literally reads every document and evaluates its suitability for release on a case-by-case basis. This means that any piece of intelligence, operations plan, or sale of military equipment must be reviewed by a certified disclosure officer.

Once selected, disclosure officers are trained at the service, combatant command, or agency level. Resident training is supplemented by distance-learning courses on disclosure and classification policy. Currently, the Defense Intelligence Agency sponsors the only course universally accredited by the Department of Defense. Commands and services often develop their own courses to focus on their specific areas of interest. Taken together, the mandatory course and supplemental training total at least two weeks of focused disclosure training. This is consistent with existing service training requirements for skill identifiers.

(Not) Tracking Skills by Any Other Name

There is only one administrative designation at any level, in any service, that covers foreign disclosure. The Navy recognizes officers that conduct foreign disclosure—as of this writing there are ten. Partly because of the limited way in which foreign disclosure officer are tracked, there is little data available about them. But in a review conducted by the author’s colleagues, more than one thousand servicemembers of all ranks completed the resident Defense Intelligence Agency course and supporting training between 2013 and 2019 at US Central Command headquarters in Tampa, Florida. Allowing for the 2018 average retention rate of 86%, (and given the relative seniority and years of service for disclosure officers, that number might be higher) this means that the military can find a scant 1 percent of servicemembers trained as disclosure officers.

That percentage drops further considering those numbers are not the whole picture. They do not include servicemembers that graduated from the Defense Intelligence Agency’s headquarters-based or mobile-training versions of the course. It also excludes those who only complete training sponsored by a combatant command or service. Short of looking at individual graduation records there is no way to track these individuals. While we can’t know for sure, it’s likely that the number of servicemembers trained (and dollars spent) are comparable to Tampa’s. To be sure, there is a small core of civilian disclosure officers, but they are dwarfed by the numbers of trained uniformed personnel. Moreover, servicemembers are intended to work day-to-day production enabling the civilian force to focus on policy support. Thus, from the thousands of disclosure-trained servicemembers who could fill scores of requirements, the US military can immediately point to just ten Navy officers in a crisis.

No other specialty or skill sufficiently fills the void either. Despite every joint function directly connecting to at least one category of classified information (see Figure 1), training on foreign disclosure is all but nonexistent at the schoolhouse. The author spoke to ten officers and senior noncommissioned officers from the Army, Navy, Air Force, and Marine Corps, and none could recall foreign disclosure at any level of their professional military education. Even in areas where there is an obvious and direct correlation between disclosure—like category 8, military intelligence—and a specific series of military specialties, there is no substantive training on foreign disclosure. This is anecdotal, but every disclosure officer I have spoken to has the same experience. Such a universal experience suggests that even if disclosure is mentioned to some students, it is quickly forgotten.

The Benefit to the Services

It would also improve cost efficiency. According to the same review, the disclosure officers trained from 2013 to 2019 in Tampa cost approximately $4.6 million in total. But because the individuals who were trained aren’t properly tracked, those dollars, and the costs from other training locations, aren’t tracked either. With skill identifiers, that investment—and future investments—in training and personnel would be better managed and readily applied to enduring requirements. Equally, the processes for creating skill identifiers already exists, meaning administrative costs for creating, reviewing, and maintaining these would be marginal. More qualified disclosure officers means that requirements are filled faster, review times expedited, and ultimately information shared with partners and allies more quickly. In practice, this means everything from multibillion dollar arms sales to intelligence sharing is more efficient. Regardless of the category of information involved, a shorter decision loop is an advantage.

Determining the criteria for a skill identifier and who is eligible is the responsibility of each service. Yet foreign disclosure is an inherently joint issue dealing with national policy. Services should collaborate to ensure that standards within each are equivalent. Equally, the services need to build a structure that is adaptable as the career field matures. Figure 2 outlines a structure that meets the immediate needs of the force while also providing room for future developments.

Level 0 is broad enough to enable rapid implementation across all services and retroactively capture thousands of servicemembers who already meet the requirement. This alone would help fill many of the unfilled requests for forces. As the field matures, customers will have more refined needs to fill specific disclosure vacancies. The additional levels provide a sufficient differentiation of experience so that the services could precisely fill requests for forces while remaining flexible enough to meet a variety of customer needs.

Ideally, each service would create all four skill identifiers simultaneously. Even though that ideal is (wildly) improbable, this model is still effective in a phased approach. Level 0 can be implemented first with subsequent levels coming later. Each service can proceed with implementation per existing policy. As long as every service uses the same criteria outlined in each level, the end result will be the same even if service timelines differ. The first service to create a skill identifier will likely receive a high demand signal from customers—and therefore be able to demonstrate a greater relevance and impact on operations. In an era where defense budgets are likely to be in flux, it makes sense to maximize high-benefit, low-cost opportunities like this.

For the services to successfully meet the requirements of great power competition in the coming decades, they will need to expand their interoperability with allies and partners. Foreign disclosure officers are essential to that process because they facilitate the actual communication of classified military information required to achieve and enhance interoperability. Creating skill identifiers for disclosure officers uses existing authorities in a cost-effective way, allowing the services to manage a mission-critical skillset that is all but untracked. Simultaneously, it fulfills the National Defense Strategy’s intent of better talent management within the workforce, all while increasing the lethality of US coalitions.

Capt. Lucas Thoma is a military intelligence officer with the California Army National Guard. He is currently on orders as the deputy designated disclosure authority for the Joint Staff at the Pentagon. His prior experience includes time as a foreign disclosure officer with DIA, a KFOR rotation as an ACE chief, and as the MI company commander for an IBCT.