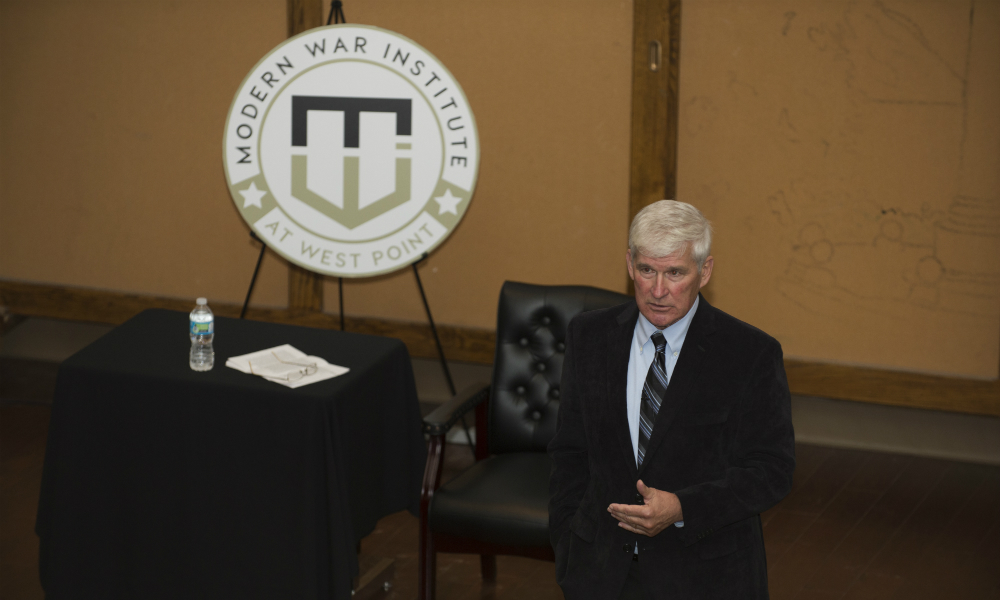 As a starting point on U.S. interventionism in the Middle East, the military historian Andrew Bacevich starts with the Carter Doctrine, outlined in his 1980 State of the Union Address. Speaking to a packed hall of cadets, staff, and faculty on September 26, the Boston University professor emeritus and Adjunct Scholar of the Modern War Institute chronicled the past three decades of a U.S. military policy in the region he described as one of “naiveté, shortsightedness, and hubris.”

Professor Bacevich, a graduate of the 1969 class of West Point, was visiting to discuss his latest book, America’s War for the Greater Middle East: A Military History (Random House). Going back to Carter, he blames his designation of the Persian Gulf as a vital national security interest as the catalyst for the militarization of American foreign policy in the region. He believes that Washington has “misused military power on an epic scale,” and only left the region more unstable and worse off.

He claimed the U.S. strategy in the Middle East has been neither to “contain” nor “crush” our adversaries but rather to “aggravate,” adding that “we have annoyed and incited out enemies, not intimidated them. We have shown a lack of resolve and confidence.”

Bacevich admits that the U.S. military remains the greatest fighting force the world has even seen in history. But he says American foreign policy, and by extension the country’s application of military force, has been on “autopilot” when it comes to its Middle East policy. He cites four reasons: First, there is no true anti-war or anti-interventionist party in U.S. politics which is necessary to foster genuine debate and sound policy. Second, politicians are penalized for not appearing to “support the troops,” which avoids any serious discussion of military drawdowns. Third, there remains powerful institutions and individuals that benefit from never-ending war. And finally, Bacevich propositioned that “The American people appear oblivious to what is occurring. War is not their concern.”

After a twenty-minute speech outlining the faulty logic of U.S. policy in the region, he took questions and answers from the audience. Bacevich discussed two non-Middle Eastern threats: Russia and China. He cautioned against overstating the threat of the former, given its declining population and the fact it remained a regional power. He also criticized our European allies and NATO members for “free-riding” and not footing their own bill, when it comes to collective security. “They are more than capable to protect their own territory,” he said. On the issue of China, Professor Bacevich sounded more alarmed. We need to ask ourselves, he said: “To what does Chinese leadership aspire?” He mentioned that China’s rise is “orders of magnitude more important” than other areas soaking up American attention in the world, such as the Syrian civil war.

In response to a question on U.S.’s relationship with Israel more deftly, he urged the audience to “take with a grain of salt all the rhetoric in our politics about our unbreakable friendship and shared values.” Bacevich argued that “the interests of each state have diverged” in recent years. The fact that Israel was “colonizing the West Bank,” he said, made it “virtually impossible there will be a two-state solution.”

He also reiterated his call for creating a kind of compulsory “National Service,” which he called “a wonderful idea.” But with 8 million 18-year-olds in any given year, he said it would be challenging to find “8 million good things to do,” not to mention the huge bureaucracy it would entail to implement such a program. He did promote some kind of effort for “limited conscription” to fill our reserves so that they will be drawn more broadly from a wider swath of society. Bacevich stressed the importance that our military resemble as best it can our society at large, as it would slow us down before “dashing off to invade some country.”

Bacevich closed on the subject of ISIS. He made three larger points on the topic: First, he said ISIS did not constitute an existential threat to the United States; second, he stressed the need for local states – Iran, Saudi Arabia, Iraq, Jordan, etc. – to take care of the problem, which he said was achievable, given that it constitutes around 25,000 foot soldiers and that history is rife with examples of states, even enemies, banding together to rid itself of a common enemy (he cited our World War II alliance with Joseph Stalin); and third, that the U.S. needs to do a better job of ascertaining why some followers of Islam are driven to militancy and violence and how to reconcile Islam with modernity. “What are they inflamed about?” Answer that question, and we can root out ISIS.