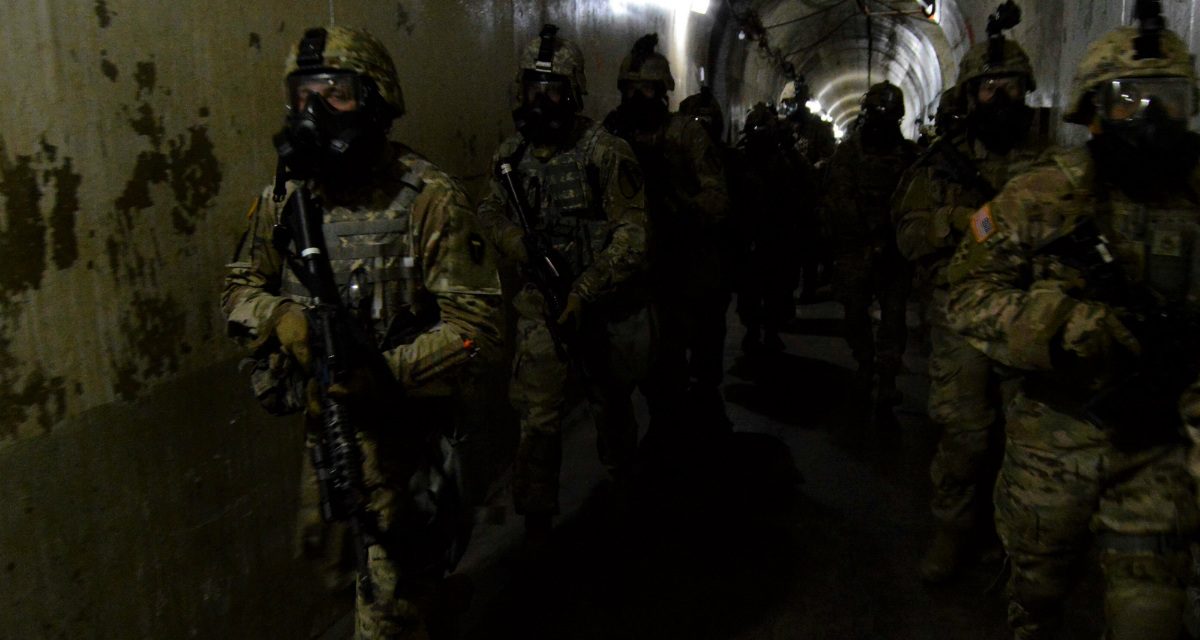 The age of urban warfare is already here. It cannot be avoided any longer. And the urban environment includes not just what is on the surface, but also super-surface and subsurface levels. Most major urban areas include an entire world of underground transportation, maintenance, water, sewer, and telecommunications tunnels. Tunnel warfare has gone hand in hand with urban warfare from the time when medieval warriors attacked castles. Since then, tunnels have been used by urban insurgents, revolutionaries, and terrorists, such as Chechen rebels during the two battles of Grozny to the even more recent extensive use of underground terrain by ISIS across Iraq and Syria.

Knowing how to shoot, move, communicate, survive, and adapt in subterranean environments is as foreign to most soldiers as walking on the moon. Much of the technology I have seen being developed for operating in this environment focuses on breaching, communicating, and navigating. There are also efforts to develop robots to advance into tunnels for a variety of tasks and situations. All these are very important. But when the time comes to send troops underground, here are a few things I would have wanted in my kit bag, some at the cutting edge of technological advancement, others substantially less so.

1. A new way of thinking about the underground domain. The Army thinks about subterranean environments too narrowly. As a career infantry officer, I did, as well. Too often we think of the subterranean as an obstacle to be negotiated if encountered. We train primarily on entering and clearing tunnels—a reflection of our similar over-emphasis on entering and clearing a room to prepare for the full spectrum of urban operations. The vast underground world of most major urban areas should be treated as a separate environment and capabilities developed not just to deal with it, but rather to dominate it. The US military once had an advantage over our enemies in night operations; we “owned the night.” We can achieve a similar dominance in the subterranean with a different way of thinking about it. The military should think about the implications, advantages, and disadvantages of conducting the full range of military operations (especially offense and defense) underground. For instance, if the Army’s new warfighting concept calls for the Army to “pose multiple and compounding dilemmas on the adversary,” why wouldn’t the service make major investments to circumvent enemy urban defensives, such as those seen during the 2016–2017 Battle of Mosul, by either using existing underground networks, or creating new ones.

2. Underground goggles. Thermal goggles or any other non–light dependent goggles would equip soldiers to see through the dark. Normal night-vision goggles require ambient light. The Army has fielded new thermal-equipped goggles, but it may take a while to get them to all soldiers or perfect them for subterranean operations.

3. Blinding light source. Not only do I want the ability to see while underground in a tunnel, but I also want the ability to take away visibility from others. A big, blinding light (it shouldn’t be too small or all the enemy has to do is shoot at the light) with a dependable, long-lasting power source would give soldiers a marked advantage over anyone laying in wait.

4. Sound nonlethals. Sound travels differently underground. The environment may be ideal for employing incapacitating sounds against an enemy.

5. Ground-penetrating radar. These devices are widely used in many different fields, from archeology to construction to mining. I would want a handheld device to see through the walls of tunnels (in all directions—laterally and vertically), and to know my distance from the surface.

6. Bat vision. Bats use echolocation to navigate, projecting sound waves against surfaces to “see” and fly. On top of ground-penetrating radar, I would like to see how existing sonic technology could be used, for example, to show what is to the front of a patrol maneuvering through tunnels.

7. “Guardian dog.” Similar to the “guardian angel” concept of having a loitering UAV overhead to provide situational awareness and in some cases supporting fire, I would want a robot above ground that is offset of the moving element. When called electronically, it would move to the patrol location and drop a winch, supplies, or whatever else is needed.

8. Infrared reflective ropes and cords. When FDNY firefighters go down into tunnels, they use a guide rope (either tethering themselves to one another or laid down and kept between their feet) to make sure they know where their teammates are even when they are spread out. It would help a patrol to stay together, know where they have been, and how to get back. US forces exploring caves in Afghanistan tethered robots with rope to prevent losing them. There are many uses for cord in tunnels, but an infrared rope or cord would be even better so that only soldiers could see it. A nice interim fix would be a solution that adds IR reflective properties to the ever-present and dependable 550 cord.

9. Robot rat. A tunneling robot could be used to make a new path underground. There are plenty of situations that may arise where following an existing tunnel may not make sense. Why not have a way to create a different path to the objective or create a bombproof shelter? In the age of electronic warfare, where it is nearly impossible to hide military forces, quickly going underground offers a solution. Inventor and entrepreneur Elon Musk has undertaken a major investment in increasing the speed of boring machines. A faster, lighter, less expensive boring machine could be a significant part of future warfighting concepts and of value to warfighters.

10. Foam grenades. I want the ability to seal different branches of tunnels as I pass them. A quick-forming industrial foam might do the job. What are the current options for soldiers underground who encounter opposition? They can’t pop smoke and can’t dive to cover. Could foam be used to create an immediate wall so that soldiers would have time to egress?

11. Dogs. Military working dogs are still a powerful tool even in underground tunnels. Currently such specially trained dogs are mainly used by special operations forces, military police, and a few other units. The capability and skill to use them should be provide to more forces.

12. An upgraded shovel. The famed entrenching tool that is well known to any soldier that has served for generations has changed little in its history. If any thought is given to soldiers operating underground, then a new lighter, stronger shovel is needed.

13. Lights, lights, and more lights. It is shocking that even into the 2000s, the US military continued to use the Vietnam-era L-shaped You can still find them required for military schools and sold at on-post clothing and sales. Soldiers often now buy and carry their own civilian headlamps, and SureFire flashlights were populated across the force to place on weapons, but where is the military-grade, lightweight flashlight for underground operations? What is the solution to establishing a patrol base or headquarters inside a cave or tunnel? Current long-lasting lighting solutions are powered by generators, which are clearly not feasible in the confined spaces and with the vulnerable air supplies found underground. Any lighting solution will have to also address other issues related to power sources, to include the weight of batteries. Solar power certainly isn’t an option, but successfully operating underground will require finding one.

14. A canary. There are major issues with oxygen levels, carbon monoxide, and many other air concerns when going underground. I know there are plenty of advanced air-monitoring devices out there, but even if I had one (like the NBC indicators we had to carry when I was a soldier), I wouldn’t totally trust them. Miners have carried canaries underground for a long, long time. If the bird goes down, you have a problem and need to act.

This is far from an all-inclusive list of the types of items needed for underground warfare. But it may provide a few ideas for the Army, if and when it begins to make necessary changes in the way it thinks about and plans for the subsurface levels of urban areas in future conflict.