Untying the Gordian Knot: Why the Taliban is Unlikely to Break Ties with Al-Qaeda 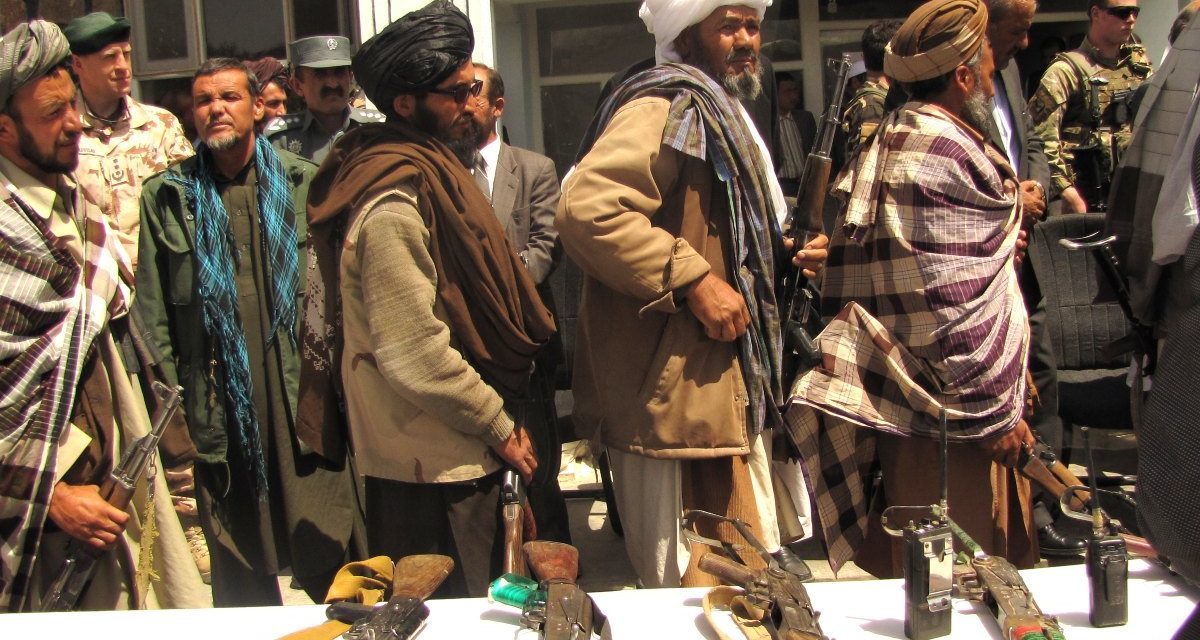 When the political officer of the US embassy in Islamabad met with top Taliban official Jalaluddin Haqqani in the Pakistani city of Rawalpindi in May 1999, neither the US government nor Haqqani knew that it would be the last major exchange between the two parties before war between them would break out—a long, ongoing war in which Haqqani would emerge as one of America’s most significant nemeses. As per the US State Department’s declassified cable, the meeting opened with the American diplomat and Haqqani exchanging small talk under the watchful eyes of the Taliban leader’s armed guards. Stroking his long beard and adjusting his white turban, Haqqani engaged his American interlocutor pleasantly. He was willing, he said, to meet with US officials regularly but discreetly. And he fondly recalled the US assistance to Haqqani, among others, during the “jihad against the Soviets and the communists” in the 1980s.

Then the meeting turned to the main issue of interest to the US government: the status of the growing army of Arab militants in Afghanistan. Several months before the meeting, the United States had carried out cruise missile strikes on Haqqani’s compounds in eastern Afghanistan to target Arab militants who had plotted the near-simultaneous bombings of the US embassies in Nairobi, Kenya, and Dar es Salaam, Tanzania. The political officer told Haqqani that the US government wanted Osama bin Laden, the Saudi leader of the Arab militants, and his associates expelled from Afghanistan as they were behind the twin bombings in East Africa.

Haqqani—“taking it all in,” according to the cable—acknowledged that bin Laden’s status was a problem but insisted that it was not an easy issue. At first, he lamented that the United States had not provided proof of bin Laden’s wrongdoing, before claiming that the Taliban had nonetheless placed tight controls on him. He went on to claim that the Taliban had considered expelling him but that the leadership remained uncertain on where to send him; the best solution for all parties, he said, was that bin Laden should stay in Afghanistan.

In response, the political officer delivered a clear warning to Haqqani: if bin Laden carried out another attack, America would act in self-defense and the Taliban leaders facilitating bin Laden—perhaps a veiled reference to Haqqani himself—would be targeted. Haqqani was unsettled, at least according to the cable, and responded that the Taliban wanted to solve the bin Laden problem through talks and that the United States should engage. As paraphrased by the embassy, Haqqani stated: “Do not turn away from us any more, but deal with us.”

More than twenty-two years since that meeting, the nature of the relationship between al-Qaeda in Afghanistan and the Afghan Taliban remains one of the most important unanswered questions about the country’s future. Of course, much has changed since then. Today, bin Laden is dead, al-Qaeda lacks the mini-army of thousands of foreign fighters that it had in Afghanistan back then, and the group has been weakened by two decades of American targeting in South Asia. In its heyday, al-Qaeda reportedly paid the Taliban up to $20 million a year for its haven in Afghanistan—no longer the case at the moment. Most significantly, the Taliban has reached an agreement with the US government—signed in Doha, Qatar, in February 2020—in which it committed to restraining jihadist groups, including al-Qaeda, from organizing international terrorism from Afghanistan.

Yet questions remain about the future of al-Qaeda. Many analysts and policymakers worry that the Taliban leadership will fail to uphold their minimal guarantees not to let al-Qaeda plot against the United States after an American withdrawal.

American concerns stem in part from the reality that despite intense US targeting pressure in the years after 9/11—and an available off-ramp of disassociating from al-Qaeda—the Afghan Taliban chose not to renounce the group and instead maintained a robust alliance with it. Following the US invasion, for example, the Afghan Taliban worked with al-Qaeda in organizing the insurgency against US and Afghan forces, especially in the east of the country. And in the early years of the insurgency, some Taliban leaders embraced and publicized their alliance with foreign jihadists.

One such Taliban leader was Mullah Dadullah. In a 2006 interview with al-Qaeda’s main media organization as-Sahab, he noted: “The Islamic Emirate did well in its treatment of the emigrant Mujahideen [before 9/11]. It expended every effort and sacrificed for their sake, wealth, and lives and if the Islamic Emirate rises again, we shall house them in our bodies if the earth isn’t wide enough, and we shall cooperate with them with our persons and wealth and ransom them with our blood.” Other Taliban senior leaders, such as Sirajuddin Haqqani, openly sought the support of jihadist constituencies in the Middle East.

In the late 2000s, amid mounting US pressure and international condemnation, the Afghan Taliban took steps to conceal and downplay its relationship with groups of foreign fighters in Afghanistan, including al-Qaeda. But there are some indicators that the Taliban consulted al-Qaeda’s top leadership on its strategy of denying its association with foreign jihadists. For one, al-Qaeda did not alter its practice of publicly pledging the Bay’ah, a religious oath of loyalty, to the Taliban’s top leader, initially Mullah Omar and after him Mullah Akhtar Mansoor and Mullah Hibatullah Akhundzada. If al-Qaeda disagreed with the Taliban’s approach, one might have expected some shift in this highly observable practice on the part of al-Qaeda’s leadership.

Second, al-Qaeda ideologue Atiyyat Allah al-Libi is reported to have informed al-Qaeda members that the Taliban’s public stance toward the group was to deny association to manage international pressures, and that al-Qaeda’s top leadership was comfortable with this position. Al-Libi wrote: “Of course, the Taliban’s policy is to avoid being seen with us or revealing any cooperation or agreement between us and them. That is for the purpose of averting international and regional pressure and out of consideration for regional dynamics. We defer to them in this regard.”

American negotiations with the Afghan Taliban offered an opportunity for the group to distance itself from al-Qaeda—and on a politically palatable timetable. In an important 2018 piece, the international relations scholar and former US government counterterrorism analyst Tricia Bacon noted that “officials working on Afghanistan tend to be more optimistic about the prospects of persuading the Taliban to sever ties with al-Qaeda than those working on counter-terrorism.” The bureaucratic lobby Bacon refers to remained in the driving seat of US policy toward Afghanistan during the latter half of the Trump administration, showing remarkable flexibility in the final end-state on the al-Qaeda question—to an extent unimaginable a decade ago when US policy on Afghanistan was dominated by senior generals. Still, major US government and United Nations assessments indicate that the Taliban did not respond meaningfully to US entreaties, and that its ties with al-Qaeda in Afghanistan remain intact. There are continuing signs of political alignment, as well as some collaboration on the battlefield, between the Taliban and al-Qaeda. But when pressed publicly, the Taliban insists that al-Qaeda is not in Afghanistan and that the last al-Qaeda fighters left the country around the time of the Arab Spring. In off-the-record conversations, however, some Taliban leaders open up and portray foreign jihadist fighters as Muslim dissidents who deserve their support.

Given the immense costs for the Taliban of their association with al-Qaeda, the enduring relationship is puzzling—especially given the tensions that have emerged in al-Qaeda’s relationships with some of its other partners and affiliates, such as al-Qaeda in Iraq and Jabhat-al-Nusra in Syria. Scholars and analysts of the al-Qaeda–Taliban relationship offer several different explanations. Some point to the history between Afghans and Arab militants during the Afghan resistance against the Soviet Union. Others argue that al-Qaeda and the group within the Taliban once led by Haqqani are bound by marital ties among the families of key leaders. There is a strong suggestion that al-Qaeda remains popular among the rank-and-file of the Taliban. Finally, analysts also argue that the experience of fighting together against a common foe has brought the two groups closer.

There is merit to each of these explanations. But there is also a political logic to the relationship that is grounded in the groups’ ideological projects. Al-Qaeda’s messaging and overall political direction indicates that it sees the Afghan Taliban as an important partner in its stewardship of global jihad—it sees in the Taliban a group whose religious virtues and political achievements al-Qaeda is able to extol before the Muslim world. According to Jihadi Salafism scholar Cole Bunzel, al-Qaeda has emphasized Afghanistan as the “seat of the anticipated caliphate” and the Afghan Taliban chief as “the caliph-in-waiting.” Al-Qaeda chief Aimen al-Zawahiri’s allegiance to the leader of the Taliban is in line with that. On the other hand, the Afghan Taliban’s political project is built around the centrality of jihad and its own status as guardians of Islam in Afghan society—which is where al-Qaeda’s jihadist project aligns with the Taliban’s foundational politics. Al-Qaeda also subordinates itself to the Taliban, giving its top leader the status of final arbiter. Significantly, al-Qaeda’s approach contrasts sharply with that of ISIS, especially ISIS’s Afghanistan branch. That group, like al-Qaeda, espouses Salafist precepts. Unlike al-Qaeda, however, it is dismissive of the Taliban’s ideological standing and political status in Afghanistan.

As the United States pulls out from Afghanistan, the Afghan Taliban remains sympathetic to al-Qaeda. Some US interlocutors who have engaged with the Taliban’s senior leadership in recent years, especially during the negotiations that led to the February 2020 Doha agreement, note that the Taliban consistently resisted moving against al-Qaeda. At one point during the negotiations, the discussion broke down with the Afghan Taliban insisting that there was no proof that al-Qaeda had carried out the 9/11 attacks.

To be sure, some parts of the Taliban oppose al-Qaeda. Some have actively lobbied against the relationship. Others argue that the group should distance itself from al-Qaeda due to American pressure and to gain international legitimacy. These voices within the Taliban are not insignificant, but their political influence on the group’s elite decision making does not appear to be substantial. Despite the Doha agreement, there are no signs that the Taliban is planning any major crackdown on al-Qaeda, nor on any other group with foreign fighters with whom it has collaborated inside Afghanistan.

For now, even if some version of the Doha agreement guides US-Taliban ties, the Taliban is unlikely to expel al-Qaeda from Afghanistan. The US government needs to be clear-eyed about the challenge at hand; policymakers should brace themselves for more cooperation between the two groups.

Asfandyar Mir (@asfandyarmir) is a senior expert at the United States Institute of Peace. He was a guest on episode two of the Irregular Warfare Podcast along with Dr. Jenna Jordan, titled “Leadership Targeting and Drones: An Effective Counterterrorism Strategy?”