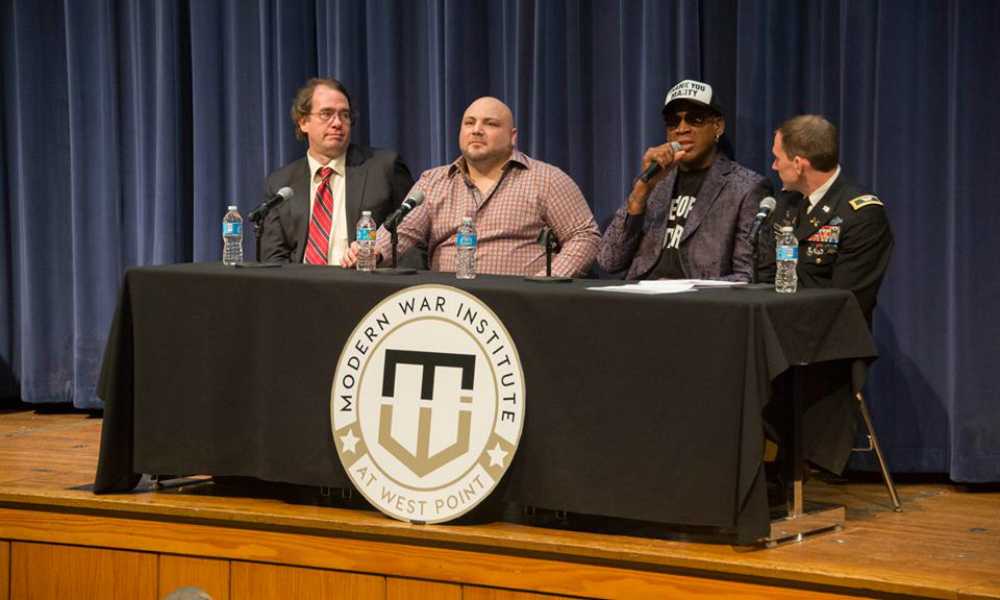 What form does American influence on foreign governments—and populations—take in the absence of formal diplomatic relations? In at least one case, that of a controversial, tattooed former NBA all-star. Dennis Rodman’s multiple trips to North Korea attracted intense criticism. But are there lessons to be learned from his visits about unofficial, alternative forms of diplomacy?

That was the central question in a March 3 panel discussion hosted by the Modern War Institute. In addition to Rodman, participants included former mixed martial artist Chris Volo, who represents Rodman as his agent and accompanied him to North Korea, and Dr. Joe Terwilliger, a statistical geneticist at Columbia University who has traveled to and worked in North Korea more than a dozen times.

Rodman is surely one of the more unconventional invitees to speak at West Point, but he spoke passionately about his belief that his visit had a positive impact. Most specifically, he believes that his relationship with North Korean leader Kim Jong-Un served as a catalyst for the release of Kenneth Bae, an American who had been sentenced to fifteen years hard labor and served more than two of those years before he was released. Bae himself agrees, having stated publicly that Rodman’s visits brought attention to his case.

Rodman was reluctant to discuss comments about Bae’s imprisonment that he made after an early trip to North Korea and for which he was heavily criticized, or his controversial statement that he considered Kim Jong-Un a “friend for life.” Politics, he said, never entered their conversations. “We just talked about basketball and the Chicago Bulls,” Rodman recalled of their first meeting.

Beyond the possible impact on Bae’s fate, Rodman and his fellow panelists also spoke about the more general bearing their visits had on North Koreans’ cultural views of the United States. Cut off from information outside the country (the North Korean internet was famously determined last year to comprise just twenty-eight websites) and exposed to anti-American and pro-regime propaganda from a young age, for North Koreans to see the country’s leader embrace an American—any American—can be a powerfully influential force that challenges their existing perceptions. “Dennis Rodman says what he wants, he has all these tattoos—you don’t get more American than Dennis Rodman,” Volo told the audience. “For the North Korean people to see their leader accept him—that’s huge.”

Dr. Terwilliger echoed this sentiment. “When [my North Korean students] saw Dennis Rodman on TV . . . with Kim Jong-Un, it made them reevaluate what they thought [about Americans],” he said, and emphasized the central role of empathy in any type of diplomacy, official or otherwise: “You can’t influence these guys if you can’t put yourself in their shoes.”

Rodman also paid tribute to the 600 cadets that filled the auditorium, expressing his admiration for the commitment they showed in choosing West Point and the military.

The Modern War Institute organizes events like this panel to encourage critical thinking about complex challenges that shape the future global operating environment.

Watch the full video of the panelists’ remarks below.