Video: Capt. Shaye Haver on Her Development as an Infantry Officer 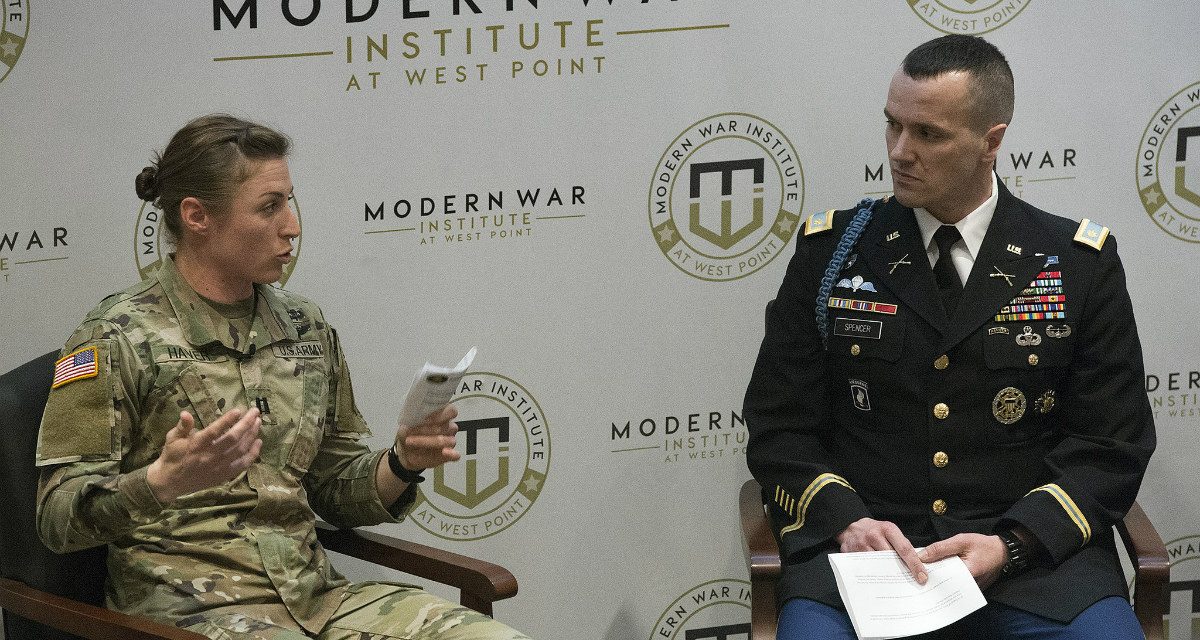 US Army Capt. Shaye Haver spoke recently at an event sponsored by the Modern War Institute at West Point. In 2015, Haver and Capt Kristen Greist became the first women ever to graduate from the US Army’s grueling Ranger School. They also later because the Army’s first female infantry officers.

During the event, she recounted her experiences in Ranger School and as an infantry officer, offering advice to nearly two hundred cadets, many of whom will soon graduate and follow her into the infantry.

She discussed her preparation for Ranger School and encouraged cadets to make the most of their time at the Academy by working hard to develop the physical fitness they would need not just to complete Ranger School successfully, but to succeed in the Army more generally. Go out and push yourselves every chance you get, she recommended. “Do it, so when you get to the point [in Ranger School] when you don’t think you can go on, you can say ‘I’ve done something like this before.’”

But she also warned the cadets about the importance of mental preparation. “You can do and ruck march for days,” she said, “but you also have to prepare your mind.”

Haver reflected on what she learned about leadership and teamwork during the three phases of Ranger School, and what it meant to her to earn the Ranger tab. She reiterated to cadets the importance of preparing themselves individually, but reminded them that all of the events they would be graded on would be completed as platoons and squads. “You’re not the one who’s going to get you your tab,” she said. “Your guys are going to get it for you. So it’s about leadership.”

Asked about her decision to transition from the aviation branch to the infantry, she spoke with pride about the opportunities to lead soldiers in the Army’s ground fighting force. Haver also said that mentorship has played a large role in her decision to challenge herself by attending Ranger School, her preparation for the challenge, and her later decision to switch branches. She acknowledged the importance of mentorship across the Army, encouraging cadets not to wait for potential mentors to find them. “You have to seek mentors out,” she said.

But she also cautioned cadets that mentorship has to be a two-way relationship. “You can’t expect them to mentor you without also giving back.” The way to do that, she said, is to go on and do your best in the Army and, when the opportunity arises, go on to mentor junior officers yourself.

Haver also spoke about her experience and the recognition that being one of the first two women to complete Ranger School and become infantry officers brought with it. “I understood the weight of what we were doing,” she said. But she didn’t anticipate the effect it would have on her personally, and she wasn’t fully prepared for the publicity or notoriety. But she handles it, she said, by reminding herself that doing so is part of her job as an Army officer.

Haver paid tribute to Griest, who transitioned from the military police branch to the infantry and took command of a company last year. Haver will soon follow suit. She is currently assigned to the 82nd Airborne Division, and is scheduled to take command of a rifle company later this spring.

She finished by strongly encouraging anybody who has the chance to go to Ranger School to do so. Doing so, even for those not serving in combat branches, would strengthen any Army leader, she said.

Watch the video of the full conversation with Capt. Haver below.