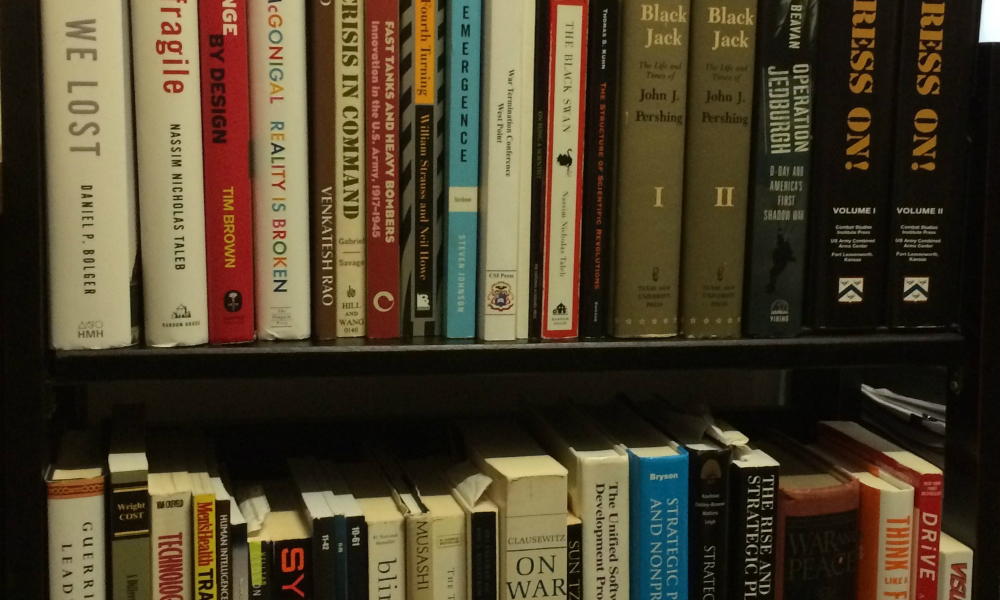 Col. John Boyd, A Discourse on Winning and Losing

Easily the work that most transformed my thinking about military operations; much more than just the OODA (Observe-Orient-Decide-Act) Loop.

This classic introduced me to the importance and role of theory in understanding war and military operations.

This is still the best book on small unit leadership I have read and it was written after Vietnam.

This work develops an understanding that there are no decision points, but rather narrative decision-making processes; this is a lesson necessary for every leader to understand.

Col. Boyd’s A Discourse on Winning and Losing shaped me in so many ways. I was lucky in that I heard Col. Boyd present his famous Patterns of Conflict pitch. His work is much more than the OODA Loop for which he is known; it is a systemic approach to understanding and engaging in combat and military operations in order to accomplish the ends of strategy. I was shaped also by the depth of his research, signaling to me that I must learn and grow even while engaged in my day-to-day military missions. His integration of theory, history, and practice led me to seek out SAMS in order to master my profession. And lastly, many of the successful decisions I made in combat and other operations, to include concepts and leader development, were shaped by what I learned from Boyd. Best of all, his book is available online.

Col. (Ret) Jim Greer graduated from the US Military Academy in 1977 and served thirty years in in the Army, including combat operations in Iraq, Afghanistan, Palestine, and the Balkans. He commanded an infantry-heavy battalion task force in Bosnia, led the OIF Study Group in the invasion of Iraq, was chief of staff of MNSTC-I, and commanded 1st Armor Training Brigade.