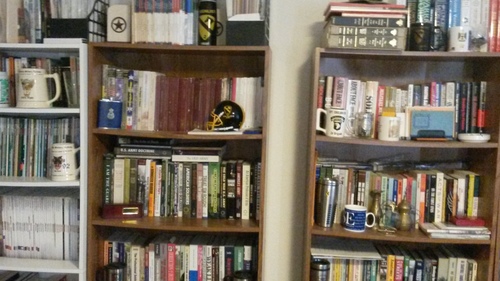 Some of the picks by previous contributors (THE GENERAL, MATTERHORN, DEFEAT INTO VICTORY, MAKERS OF MODERN STRATEGY, THIS KIND OF WAR, ONCE AN EAGLE, and ON THE PSYCHOLOGY OF MILITARY INCOMPETENCE) were top contenders for my picks, so I’ll heartily endorse those choices and in the interest of not repeating add in some new choices, “cheating” a bit by tying multiple titles together thematically.

James R. McDonough PLATOON LEADER; Joseph R. Owen COLDER THAN HELL: A MARINE RIFLE COMPANY AT CHOSIN RESERVOIR; and Charles B. MacDonald COMPANY COMMANDER.  Sticking with my primary area of professional expertise and experience, I think these three books capture the gritty essence of close-in ground combat, where the odds were not overwhelmingly in our guy’s favor, with the joyous burden of command at the junior officer level.  I first had to read PLATOON LEADER as prep prior to becoming a Beast Barracks Squad Leader in 1990 and then read it again in another course.  I still have my Bantam paperback copy of MacDonald’s book that I got as a small gift from when I was selected to attend West Point in fall 1987.  Think about what you were/are doing at age 20 and then put yourself in the shoes of Captain MacDonald commanding a rifle company against the German Army.  Humbling.

David Hackworth, ABOUT FACE.  This choice will not be without controversy I am sure.  I know Vietnam era folks who despise Hackworth and consider him the biggest fraud of his time and others who adore the man verging on worship. It was an important snapshot of the military when first published in 1989.  I read it as a Cadet and I am glad I first read it when I did not know any better.  It reads differently now as a Colonel for sure.  Take it with a sack full of salt, but there are many useful nuggets in there and more than a few warning signs. While he was more flawed than most, Hack truly loved Soldiers.  His follow-on story of battalion command in Vietnam, STEEL MY SOLDIER’S HEART, is worthwhile also.

Lewis “Bob” Sorley, HONORABLE WARRIOR and Henry Gole,WILLIAM E. DEPUY: PREPARING THE ARMY FOR MODERN WAR.  The two most significant, but understudied, Army four-stars of the Sixties and Seventies aside from Westmoreland and Abrams. Sorley’s book is a highly readable (and only) biography of Vietnam-era Army Chief of Staff, General Harold K. Johnson.  It lacks the controversy of his recent Westmoreland biography. A lot of great biographies on generals and admirals out there, but they tend to focus on the titans of war.  Johnson in the Pentagon is a critical, if woefully understudied, figure in our activities Vietnam.  His decision not to resign despite a knowlingly bankrupt strategy is a staple of ethics classes in the military. His survival as a multi-year POW of the Japanese and his DSC-earning performance as Commander of 5th Cavalry Regiment in Korea are worth the price alone.  Depuy, simply, personified the post-Vietnam Army.  His experiences as a Regimental S3 and Battalion Commander in World War II seared things into his mind that he put into practice as TRADOC Commander. His legacy still drifts throughout the Army 38 years after he retired and 22+ years since he passed away.

THE CHALLENGE OF COMMAND: READING FOR MILITARY EXCELLENCE by Roger Nye.  This is THE book I recommend on leadership for all officers, cadets, and officer candidates.  Works for young Lieutenants and not so young Colonels. Colonel Nye passed away a number of years ago. I treasure my autographed, 1st edition copy. Published in 1986, and still in print, while it holds up pretty well, I lament that he never got a chance to do a short revision and update taking it into the modern media era a bit.

THE MASKS OF WAR by Carl Builder.  We are a Joint Force, but we are governed by our Services.  This is the book on the essence of our service cultures.  Holds up pretty well despite being 25 years old, but it is a bit rough around the edges now that we are 23+ years away from the collapse of the USSR. Unfortunately, Carl Builder passed on also a few years back and did not get a chance to do an update of this.  Short and readable.

I am going to take Matt up on his suggestion that movies can be included and pick the 1949 movie, 12 O’CLOCK HIGH starring Gregory Peck.  Based on a novel, which is out of print and ridiculously over-priced on the used book market, this is the movie I would use for an OPD on leadership, command, taking casualties, rehabilitating folks, taking care of yourself for the long haul, etc. How do you take over a unit, one that just isn’t getting the job done, from a beloved commander?  How do you keep sending your folks into the cauldron of combat, repeatedly, when you know them all personally without becoming an inhuman ghoul? I have read some folks comment that this is a rare case of the movie being better than the book.

Christopher Coglianese is an actively serving Colonel in the US Army. This essay is an unofficial expression of opinion; the views expressed are those of the author and not necessarily those of West Point, the Department of the Army, the Department of Defense, or any agency of the U.S. government
Share on Facebook Share
Share on TwitterTweet
Share on LinkedIn Share
Send email Mail
Print Print