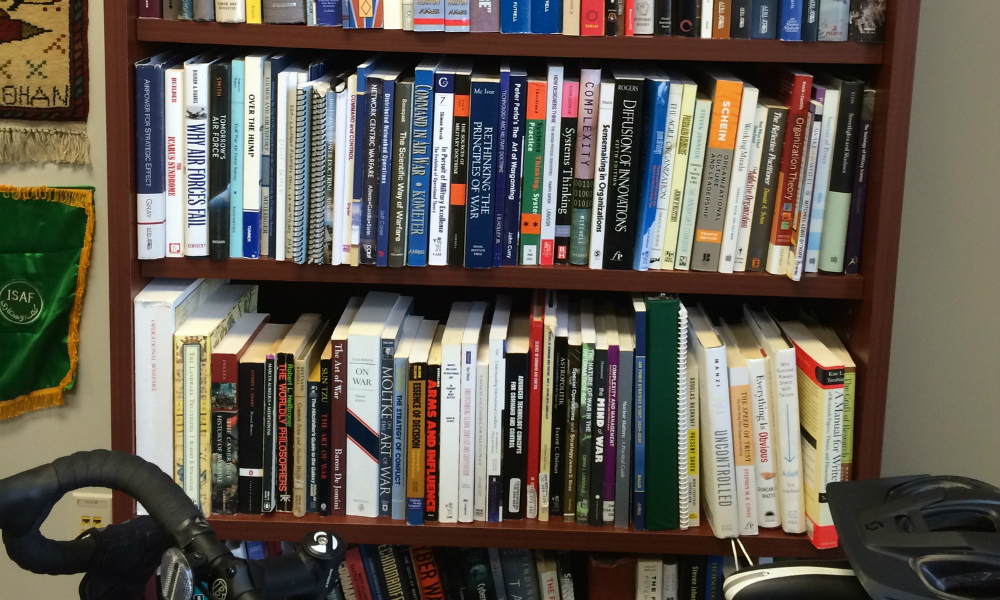 The PACAF IG lent me his copy of the original Boyd presentation handouts in 2008, which I quickly copied and ingested. I loved the audacity of Boyd’s project to understand the fundamental elements of war and decision, and his intense personal search for “ignorance at a higher level,” which I’ve made my mission in life as well. Most who know me will agree that I’ve already achieved the first part of that …

I used the German title because I need all of the uben and lesen I can get for my PhD research. I finished my first full read of “On War” in 2004, and after ten years of grappling with it, I’m finally ready to begin serious study.  But as an ABD who still has more hours of reading to go than he has flying time in his jet, how can you not like the guy who wrote this: “I sense within myself a specific striving after a noble purpose; and in me, as in a well administered state—all energies shall obey and serve this striving.”

I really didn’t know how to pick between this, The Strategy of Conflict, or Micromotives and Macrobehavior—Schelling’s works have been crucial to my development as a military thinker, and it was one of the highlights of my military career to get to tell him that personally when I met him at the International Conference on Complex Systems.

It wasn’t easy reading, but it was a great introduction to the field of strategic studies for me, one which led me to the major theorists, and the most useful critiques and comparisons of their thinking. It also led me to Gray’s subsequent works, which have made immense contributions to the field of strategic studies, and have heavily influenced my own conceptions about what the role of strategists can and should be.

The Landmark Thucydides: A Comprehensive Guide to the Peloponnesian War

On my first day in the AOC strategy division in PACAF as a brand new major, I was introduced to the O-6 division director, an A-10 driver and strategist with the highly descriptive callsign “Big’Un.”  As the deputy introduced me, Big’Un glowered at me with a wisely suspicious eye, and his first words to me were “Ever heard of Thucydides?”  When I answered affirmatively with the book title, his next words were, “He can stay.”

It might be cheating to pick a sixth book for this one, but I’d have to say Streetlights and Shadows:  Searching for the Keys to Adaptive Decision Making by Gary Klein. I used to raid the School of Advanced Military Studies bookstacks while I was a CGSC student at Ft. Leavenworth, so I was already familiar with Klein’s Sources of Power: How People Make Decisions. But it wasn’t until I read this one that I realized what the true challenges of a modern strategist are: helping groups of people and commanders use sound theory, analysis, and solid analytic tools to gain better systemic awareness for making good decisions in complex situations, while doing your best to avoid unhelpful cognitive biases and negative unintended consequences along the way. For me, this book is like the Rosetta Stone of strategy—if it was a little cheaper, I’d hand it out like candy to the other strategists.

Dave “Sugar” Lyle is an actively serving officer in the US Air Force. This essay is an unofficial expression of opinion; the views expressed are those of the author and not necessarily those of West Point, the Department of the Army, the Department of Defense, or any agency of the U.S. government