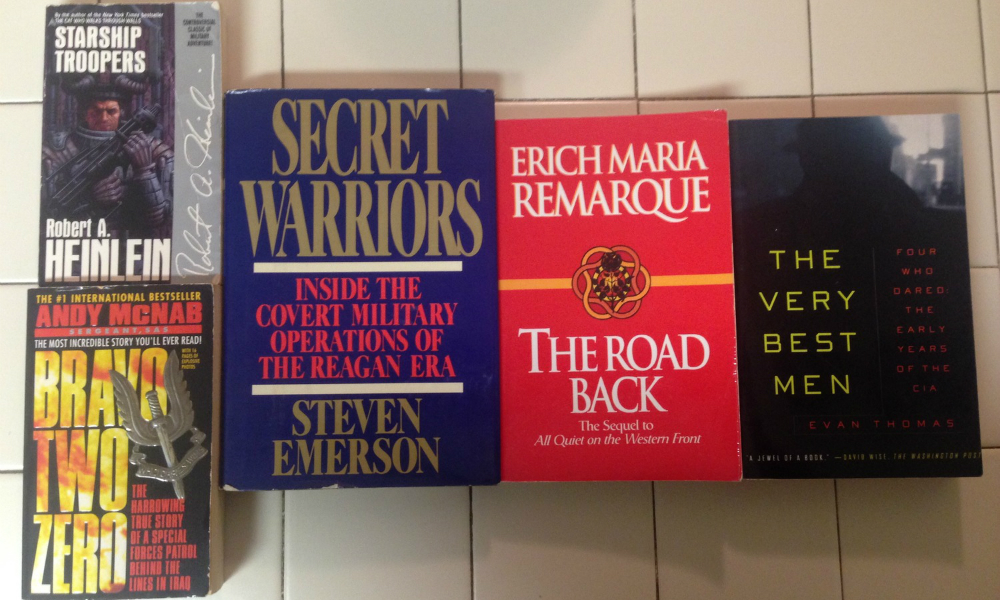 Andy McNab, Bravo Two Zero.  Though some debate surrounds the factual basis of this book I found it highly influential as a young Infantryman.  The attention to detail during the planning of the patrol was fascinating.

Robert Heinlein, Starship Troopers.  This book is a classic in many ways.  The most enjoyable parts to me were the discussions regarding the differences between how the enlisted and officers were trained as I had experienced this first hand in the Marine Corps.

Steven Emerson, Secret Warriors.  An amazing book that chronicles how, after the failed hostage rescue attempt in Iran in 1980, the Department of Defense basically said “never again” and developed various intelligence and special operations capabilities.

Evan Thomas, The Very Best Men.  This book chronicles four men during the early years of the Central Intelligence Agency (CIA).  The internal CIA rivalry between intelligence collection and covert action during this time period is extremely interesting.  Also of note is how the book illustrates the downfall of some of the characters when they allow their clandestine work to be all consuming.  Want to know how not to do work / life balance in the intelligence community?  Read this book.

Erich Maria Remarque, The Road Back.  This book describes the experiences of German Veterans trying to reintegrate into society after World War I.  From a personal point of view this book is valuable as I think all Veterans, no matter how, when, or where they served, have similar thoughts and feelings.  From a professional point of view it is valuable when thinking about demobilization, rehabilitation, and reintegration, specifically when associated with counterinsurgency campaigns.

Evan Thomas, The Very Best Men.  Working in the intelligence community is a team sport but often a highly individualized effort.  When you have success your ego sometimes gets the best of you.  This can lead to viewing oneself as indispensable which is not healthy for the individual, the workplace, or life at home.  This book illustrated to me very well the person I did not want to become.

Phil Walter has served in the Military, the Intelligence Community, and the Interagency.  Mr. Walter is a Member of the Military Writer’s Guild, the International Institute for Strategic Studies, and an Associate Member of the Foreign Policy Research Institute.This essay is an unofficial expression of opinion; the views expressed are those of the author and not necessarily those of West Point, the Department of the Army, the Department of Defense, or any agency of the U.S. government
Share on Facebook Share
Share on TwitterTweet
Share on LinkedIn Share
Send email Mail
Print Print