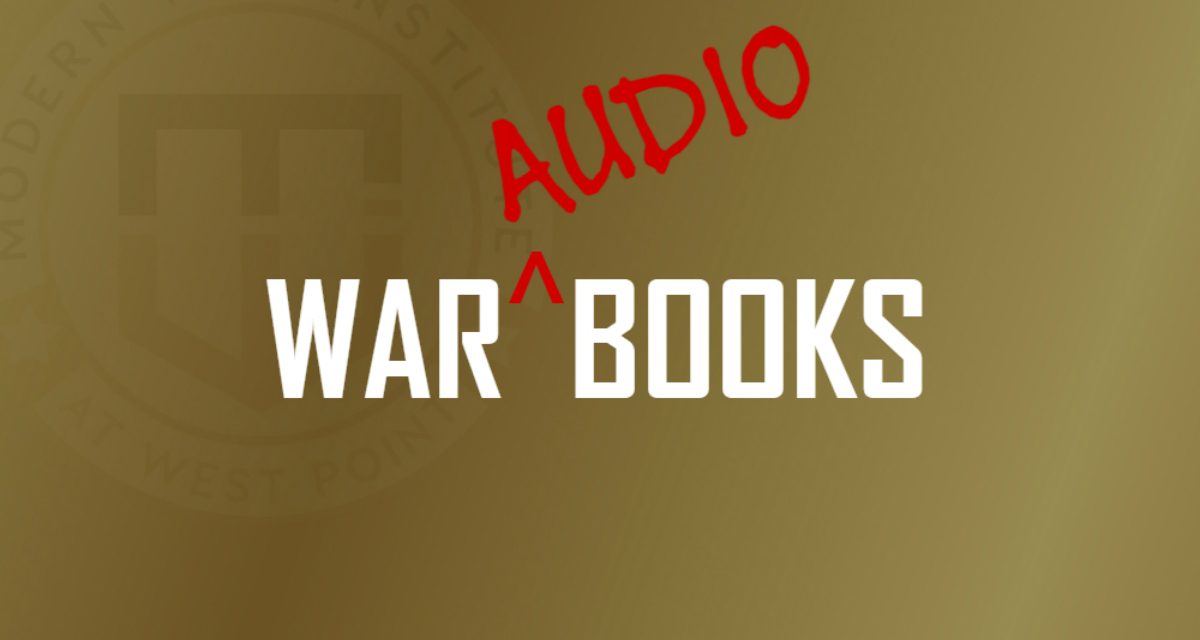 Editor’s note: War Books is a weekly MWI series, in which we ask interesting guests—practitioners, experts, or experienced students of war—to list five books that have shaped the way they understand war, warfare, and strategy. This edition of War Books includes recommendations made by MWI Non-Resident Fellow Max Brooks and MWI Deputy Director Maj. John Spencer in two previous editions.

We should never stop learning, but sometimes we don’t have time to read. Being visual creatures means we have to stop everything else to look at a book. That leaves a lot of books on the shelf. That’s where audiobooks come in. As someone who struggles with dyslexia, I can honestly say that over half of my education, from high school to today has come through my ears, not my eyes. So when my colleague, Maj. John Spencer, asked me to submit my top five audiobooks for the MWI website, I jumped at the chance. Granted, these may not be my top five, but rather five from my top hundred (the rest will have to come later). They are:

Rosa Brooks, How Everything Became War and The Military Became Everything: Tales from the Pentagon

Lt. Col. John A Nagl, Learning to Eat Soup With A Knife: Counterinsurgency Lessons from Malaya and Vietnam

Like all Americans, I grew up with the narrative of inflexible, plodding British Redcoats getting picked off by wily, buckskin-clad American rebels. Two centuries later, the British learned from their experience in the Revolution while we became the Redcoats. This book compares the British flexibility in Malaya with American rigidity in Vietnam. It’s a powerful case study for future insurgencies.

Col. David Hackworth, About Face: The Odyssey of an American Warrior

I first heard this book when I was in high school, and, at first, it took some getting used to. Fair warning, the late Col. Hackworth doesn’t have the most melodious voice. In fact, he sounds like the guy who plays “Archer,” but you’ll quickly forget that when you hear his story. He served in both Korea and Vietnam and is not shy about his criticism of either. His experience in Vietnam is packed with lessons for any guerrilla war, and should be read as such. He loved the army. He loved his country. Both should learn from him.

This alternate history tale takes place during Kaiser Wilhelm’s invasion of the United States. After winning a quick, sharp victory in 1914, Germany turns on the only major world power left and tries to carve out an empire along our West Coast. Conroy digs deep into the real-world research of “what if” and presents a credible, logical, intense story. Like all good alternative history novels, this one makes you see the crossroads of time. For me, there’s no better way to learn about what happened then wondering what might have been.

My mom got me this when I was in high school and it remains, to this day, the best audiobook ever made. It’s the mid-1980s, the Soviets have just suffered a crippling terrorist attack on their main Siberian oil field. They need the oil from the Persian Gulf but the United States and NATO are in the way. Clancy, the unmatched master of the techno-thriller (a genre he invented), crafts the most detailed, fact-based WW3 story ever written. And if that’s not enough to get you listening, the book is read by Academy Award winner F. Murray Abraham! This man is so talented and versatile, he plays every character with four different accents. He single-handedly proved that audiobooks can be a work of art, (which I told him years later when I asked him to read a part on the WWZ audiobook).

I enjoy learning for learning’s sake. I feel strongly that Army professionals should constantly study.  One of the best ways I have found to supplement reading is through the use of audiobooks. I listen to them while I am driving, running, working out, or just alone doing mindless chores around the house. Just like books, there are good and bad audiobooks. The ones I am always in pursuit of are those that keep you sitting in your car in the driveway because you just want to hear more. I chose the following five (plus one) audiobooks relating to war or warfare not only because of their content, but because of their storytelling excellence and quality of audio performance (it definitely matters who reads the book).

Hands down the best audiobook I have ever listened to. Told through interviews, Brooks takes responses to real emergencies and interconnects them globally in a fictional story about zombies. He often says that you could easily “remove zombies and insert bird flu, ebola, or any global pandemic.” The story’s different interview characters are voiced by different actors—including famous ones like Alan Alda— and with different accents.

Yes, this military classic is on almost every military reading list. The audiobook is as high-quality as the written version. A timeless work for its lessons on leadership, it also provides an American military history survey from World War I to Vietnam. It is a long book and, as you would imagine, a VERY long audiobook. But the story plot, transitions, and character developments make it well worth the time investment.

Tom Butler-Bowdon, 50 Psychology Classics — Who We Are, How We Think, What We Do: Insight and Inspiration from 50 Key Books (50 Classics)

The military strategist Carl von Clausewitz said, “War is . . . an act of force to compel our enemy to do our will.” Compelling a human to do your will requires a deep understanding of psychology. This audiobook provides fifty of the top theories known about psychology, from Stanley Milgram’s experiment focusing on the conflict between obedience to authority and personal conscience, to the Stanford prison experiment’s study of the human response to captivity—both for the captive and captor.

An epic story of resilience. The story is about Olympian Louis Zamperini, who survived forty-seven days on a raft in the Pacific after his bomber crashed, then endured two years of mental and psychological torture in Japanese prison camps. It is not only a story of survival, but also a story of living.

I picked this one up randomly in an audiobook exchange (turn in old ones and get credit for other used ones). This is the memoir of Mosab Hassan Yousef, a Palestinian whose father was areligious leader and founding member of Hamas. Mosab tells the story the story of being arrested and placed in an Israeli prison, becoming an undercover agent for Israel’s internal security, converting to Christianity, and eventually moving to the United States.

This is my favorite military science fiction audiobook—not for its future military technologies or galactic story, but because of Steakley’s ability to place you in the mind of a future warrior. including his struggle to live with the battles he fought.