War Books: Want to Be a Better Military Leader? Learn to Negotiate 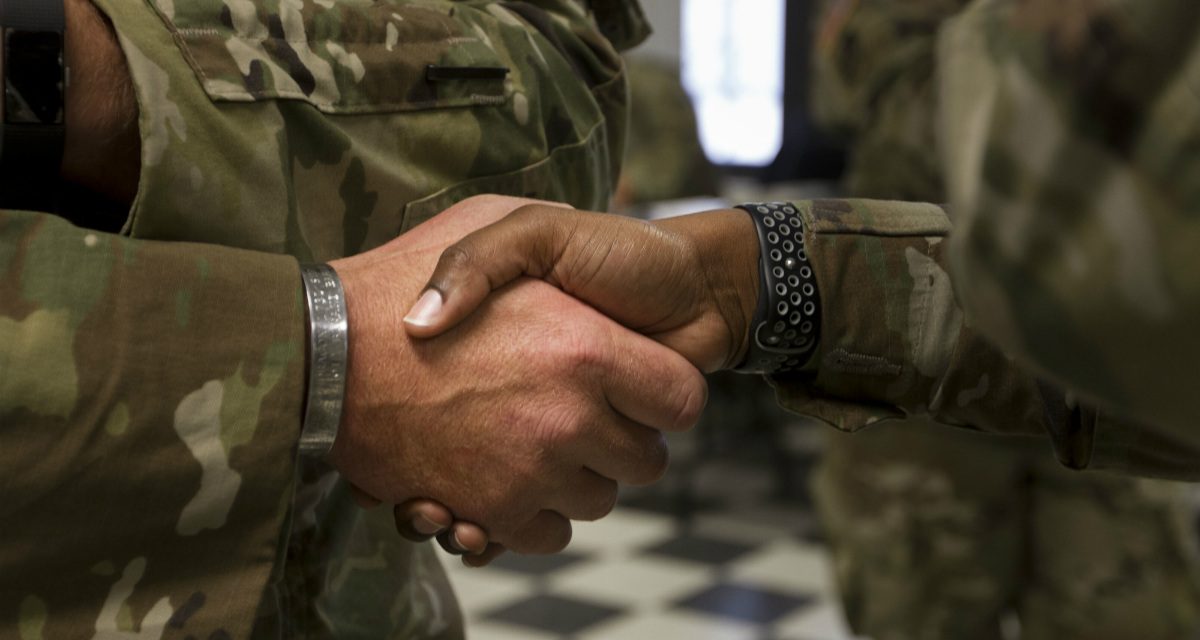 Military leaders negotiate. Whether coordinating use of a range, hashing out authorities for a combined task force, or devising a way out of Syria, military leadership at all levels requires negotiation.

As such, Army leaders would benefit from understanding four particular negotiation concepts: interests, no-deal options, “away from the table” moves, and integration with national strategy. Understanding counterpart interests is fundamental to successful negotiation. In Afghanistan, each nation in the International Security Assistance Force came with its own national caveats—restraints put on military forces. Leading combined operations sometimes required negotiation with our counterparts around their interests.

Interests also help unlock value. Not every negotiation ends with a winner or loser. On the contrary, good negotiations leave both parties better off. President John F. Kennedy ended the Cuban Missile Crisis by swapping withdrawal of short-range Jupiter missiles in Turkey for Soviet missiles and IL-28 bombers in Cuba. By reducing the risk of nuclear war, both parties benefited. This notion of “growing the pie” by generating creative options that satisfy both parties’ interests can amount to “win-win” outcomes where both parties are better off than they previously were.

Next, understanding “no-deal” options lets negotiators know when to walk away. In a 2004 article for Military Review, Col. Timothy Shea argued Americans needed to understand their no-deal option when negotiating with post-Soviet officers. Because Ukrainian officers needed American funds to support their exercises, he knew he could walk away. Figuratively ambushed by a dozen angry Ukrainian officers in a meeting, Col. Shea marched out knowing he was better off without a deal. The Ukrainians countered with a private meeting that produced a solution better than the colonel’s no-deal option. Knowing your no-deal option equips you to succeed.

Third, leaders should shape military operations to strengthen their bargaining position when they come to the table. During the Moro Rebellion in the Philippines, then-Brig. Gen. John J. Pershing wisely designed his military campaign objectives with negotiations in mind. While recruiting locals into the police, improving governance, and providing services increasingly isolated the Moro rebels, his attack against holdouts at Bud Bagsak destroyed the insurgent fighting force. This “away from the table” move cemented American control in the long negotiation with Moro leaders.

Finally, strategic leaders must understand how campaigns support national policy. Colombian negotiations with FARC guerrillas highlight the role of military campaigns in realizing strategic objectives. The conflict could not be resolved until the Colombian government “greatly strengthened its security institutions, expanding control of the country’s territory and protecting the population.” Coupled with governmental reforms, the military campaign brought FARC to the table to resolve the conflict.

Colombia put together all four concepts: The government understood interests, its no-deal alternative, how to shape the negotiations away from the table, and how negotiations furthered the government’s strategy. Our goal is the same competency in our Army’s leaders.

In a recent paper we published in Military Review, we propose a progressive negotiation curriculum for the Army’s professional military education system. But while you wait for the Army to adopt our suggestions, we recommend these four books for military leaders to get smart on negotiation:

David A. Lax and James K. Sebenius, 3-D Negotiation: Powerful Tools to Change the Game in Your Most Important Deals

For us, it is impossible not to kick off the recommendations with this offering from Lax and Sebenius—the book that introduced us to the field of negotiation. The authors’ unique emphasis on “away from the table” moves and deal designs that create value for all parties involved keeps this book on negotiation syllabuses at Harvard, West Point, and beyond. Lax and Sebenius outline their framework well and offer in-depth case studies to show the reader exactly how to put their methods into action. While the cases discussed focus on civilian negotiations, military readers will easily find parallels to their own work.

Roger Fisher, William L. Ury, and Bruce Patton, Getting to Yes: Negotiating Without Giving In

While there are more recently published titles on this list, Getting to Yes has been a perennial best seller since its debut in 1981. Don’t be dissuaded by its original publication date. This book is in its third edition for a reason: it represents the cornerstone of the Army’s doctrinal approach to negotiation and is a foundational text in the field. Importantly, the authors coined the “principled negotiation” approach, highlighting the tension between claiming and creating value at the negotiating table. By pairing Getting to Yes with Lax and Sebenius’s 3-D Negotiation, military negotiators will the right readings in their rucks.

At the risk of trusting James Sebenius too much, we also recommend this 2018 book, co-written with his fellow Harvard professors Ambassador Nicholas Burns from the Kennedy School and Robert Mnookin from the Law School. While Henry Kissinger’s legacy is mixed, his record as a negotiator is strong. His role in the most noteworthy negotiations of the past century drew this all-star team of scholars to examine his record more closely. Given that the authors teach negotiations from law, diplomacy, and business perspectives, they coax unconventional lessons out of history you think you know. Based on hours of new interviews with a reflective Kissinger, they uncovered previously untold stories that color their highly readable account. They close with a synopsis of fifteen overarching lessons gleaned from the Kissingerian playbook. Aspiring military negotiators could do much worse than following his hard-earned wisdom.

This user-friendly guide introduces the reader to a seven-element framework that can be systematically applied to any negotiation. Written by a former professor at West Point, this book emphasizes the importance of preparation, understanding interests, crafting the right message, integrating multiple parties, and disarming aggressive negotiators. These skills are essential to being a successful leader at any level. Leveraging the framework, concepts, and processes in the guide will create more value for all parties.

Beyond these books, leaders should keep learning. Consider following the Harvard Program on Negotiation on Twitter. As the godfathers of negotiation study, the program highlights new research and frameworks for negotiators. For more military applications, the Air Force Negotiation Project publishes free materials and works with a host of military units interested in strengthening their hand.

Learn negotiations. Much more than key-leader engagements in combat, negotiations will create value for your unit and improve organizational effectiveness.

Maj. Tom Fox is an instructor of international affairs in the Department of Social Sciences at West Point. He holds a BSFS from Georgetown University and an MPP from the Harvard Kennedy School.

Maj. Nicholas S. Tallant is a Special Forces officer. He holds a BS from Georgetown University and an MPP from Harvard University’s Kennedy School, where he was active with the Kennedy School Negotiation Project and the Davis Center Negotiation Task Force.