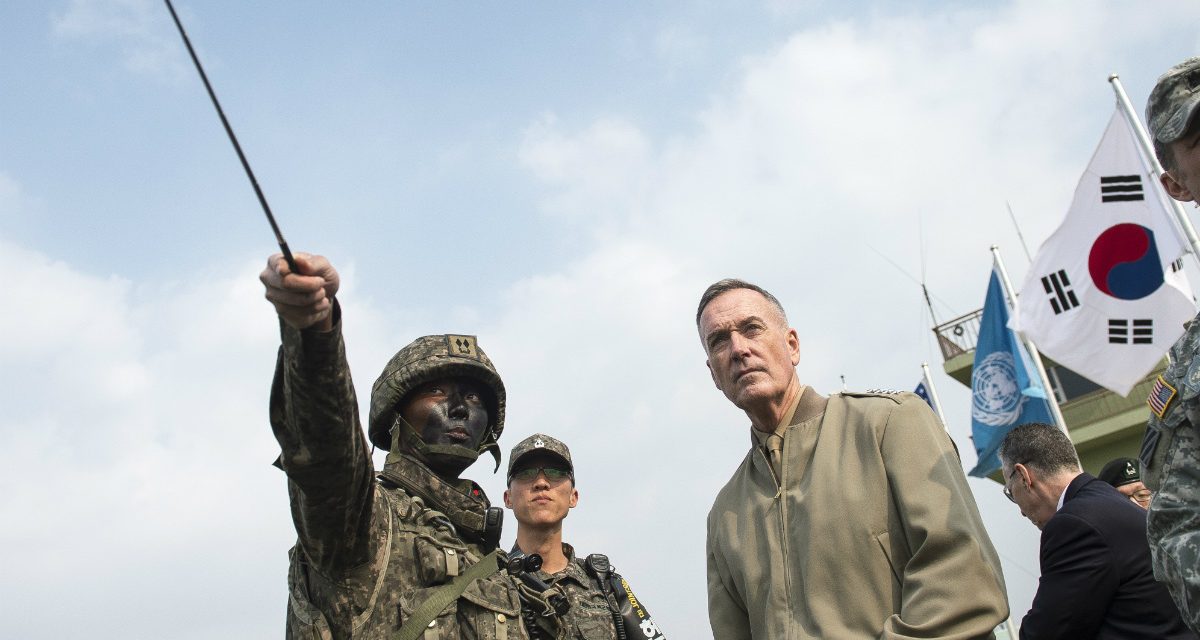 No one is surprised anymore when North Korea threatens the United States and its allies. After nearly seventy years of incessant threats and provocations, their angry rhetoric is par for the course. Many think those threats are meaningless. According to the conventional wisdom, North Korea knows that America would certainly defeat it in a war and end that war by removing Kim Jong-un and his cronies from power. Since the North’s ultimate aim is “regime survival,” war with America is not in North Korea’s interest. “North Korea,” the standard line goes, “is not suicidal.” They may threaten, but they will never strike. Thus, North Korea’s recent provocations—including a sixth nuclear test, the launch of a ballistic missile over Japan, and repeated promises to fire missiles at the US territory of Guam—are alarming, but not designed as a prelude to war.

This common, comforting belief—in essence, that America and South Korea have successfully deterred North Korea with their overwhelming military force—misses the point. For Kim Jong-un, “regime survival” is inextricably linked to “Final Victory,” the North Korean term for reunification with South Korea on the North’s terms—the former a necessary condition for ultimate fulfillment of the latter. As long as North Korea only controls half the Korean Peninsula, its regime’s survival is tenuous. The two half-nation states are doomed to threaten each other. As the insightful Koreanist B.R. Meyers put it, “North Korea has consistently proclaimed its determination to unify [Korea] and behaved accordingly,” because doing so is “the only long-term solution to the regime’s chronic security problems.”

In the medium term, North Korea’s path to unification requires it to force the United States to abandon South Korea, as they’ve long demanded. While America guarantees South Korea’s defense, “Final Victory” is hopelessly unattainable. The North routed the South’s army in 1950 and nearly subjugated the country but was eventually driven back by the US and allied forces. If America were to leave, however, the North-South dynamic would radically change. The South would still appear to have the upper hand, of course. As South Korean President Moon Jae-in recently declared: “South Korea’s GDP is 45 times larger than that of North Korea, so Seoul’s defense capabilities should easily overwhelm those of the North.” Nonetheless, totalitarian North Korea has demonstrated that it has more ability to influence and subvert the democratic South than vice versa. More importantly, North Korea is a nuclear power, and there is no reason to think that it would hesitate to use nuclear blackmail or even war to bend the South to its will. The bottom line is that the North Korean threat is real, and North Korea could still win a fight against South Korea alone in the long run.

Because of this, we must take North Korea’s threats seriously. Despite sometimes appearing defensive, the North Koreans are perpetually on the verge of offense. Since an armistice mostly ended the Korean War in 1953, North Korea has shot down a US military plane, captured an American military vessel, sunk a South Korean destroyer, shelled a South Korean island, sent countless armed operatives to infiltrate the South, and flown numerous drones on reconnaissance missions across the Demilitarized Zone. Even when North Korea is not trying to start a war, acts of war will always be in their repertoire. For the Kim family regime, the question is not if North Korea will strike, but when. The world is right to anxiously wonder what they will try next.

One possibility is that North Korea will launch an actual strike with the country’s missile force. On August 13, according to North Korean propaganda, the North Korean Strategic Forces chief, Lt. Gen. Kim Rak-gyom, briefed Kim Jong-un on a plan for a “preventative strike” on Guam. Although this threat was written off as absurd by many, it raises an important question: how did Lt. Gen. Kim propose that Kim Jong-un employ his missiles to further his political aims? Trumpeting the Strategic Force’s unique capabilities, Lt. Gen. Kim might have noted that unlike the rest of the North Korean armed forces, his missileers are uniquely capable of provoking the United States without provoking South Korea equally. Since 1999, North Korean provocations have been primarily aimed South Korean forces, while missile and nuclear tests anger both allies. Now that North Korea can back up its litany of threats to strike the United States with proven missiles, however, North Korea has new options for targeted provocations.

If conducted at the right political moment, a carefully targeted strike on the United States could be a brilliant, risky gambit. Imagine this: In the aftermath of a North Korean attack on Guam, the president of the United States would order the American 8th Army and 7th Air Force stationed in South Korea to retaliate, aided by other forces in the Pacific. As Secretary of Defense James Mattis put it, it would be “game on” for the US armed forces. The military situation in Korea would quickly escalate into a nightmarish war.

Unless, that is, the South Koreans tried to stop the American counter-attack. Just as an editorial in a Chinese Communist Party newspaper recently advocated, South Korea could actually act as a “buffer” between the United States and the North. President Moon reminded the world in his Korean independence day address on August 15 that Seoul would still have to consent to America launching an attack from South Korean territory. As war loomed, he would have to weigh his obligation to his American ally against the sorrowful potential for massive Korean casualties. If he sought to de-escalate tensions and avoid war, his actions could easily be misinterpreted by Americans as a betrayal. The alliance might break up.

North Korea could make supporting an American counter-attack very hard for President Moon. The North could conceal its hostile intent by re-starting negotiations on inter-Korean relations or denuclearization just before the strikes. Kim Jong-un’s father Kim Jong-il called diplomacy a “counterintelligence operation” meant to deceive foreigners. It would not be the first time North Korea attacked the United States and South Korea while faithlessly negotiating with them. Simultaneously, a relaxed North Korean conventional military posture along the Demilitarized Zone could lull South Korea into a false sense of security.

If the missiles were launched at but never struck Guam, either due to an embarrassing in-flight failure or a successful American interception, it would be even harder to make the case for war. The United States and South Korea would find themselves together in a confusing “gray zone,” but with potentially very different strategic impulses. Many Americans would clamor for regime change in the North, claiming that deterrence had patently failed, but the 1953 US-South Korean mutual defense treaty would not necessarily obligate Seoul to help America start a war over the failed strike. North Korea might even claim the missiles were part of another (illegal) test, and that America had attacked them by shooting the missiles down. Just as in the North’s falsified alternate history of the first Korean War, the regime would play the victim in their propaganda. China, which still officially believes that North Korea was attacked in 1950 and resents American’s presence in East Asia, might pressure South Korea to stop America from starting a war on its border. Russia could support North Korea’s claims with spurious intelligence about the missiles.

With no Americans dead, and the South seemingly safe from attack, would President Moon put his country at risk to aid in retaliatory strikes? Probably—but he’d have many good reasons not to. The tension in the alliance would be tremendous.

To be sure, the South Koreans are unlikely to suffer a failure of nerve if America asks for their help. They share our long-term interest in checking the North whatever the short-term cost, and they have the military ability and political will to fight. In the early 2000s, the alliance was unpopular, and there was a real risk of a split. Since then, however, the North has become more menacing, and today about 90 percent of South Koreans express support for the alliance that protects them.

North Korea may think differently, however. The Kim family regime has a long tradition of engaging in reckless provocations, and we must never underestimate the risk they will miscalculate. They have almost re-started the Korean War before. Since threatening Guam, they have not neglected to threaten South Korea, which suggests they are not targeting one half of the alliance with their missiles yet. If they ever do, we must answer them with unambiguous unity. Responding with anything less could be precisely what North Korea is angling for.

T.S. Allen is a military intelligence officer in the US Army who served in the Republic of Korea from March 2016 to March 2017. Follow him on Twitter @TS_Allen. The views expressed in this article are those of the author and do not reflect the official position of the Department of the Army, the Department of Defense, or any other part of the US Government.