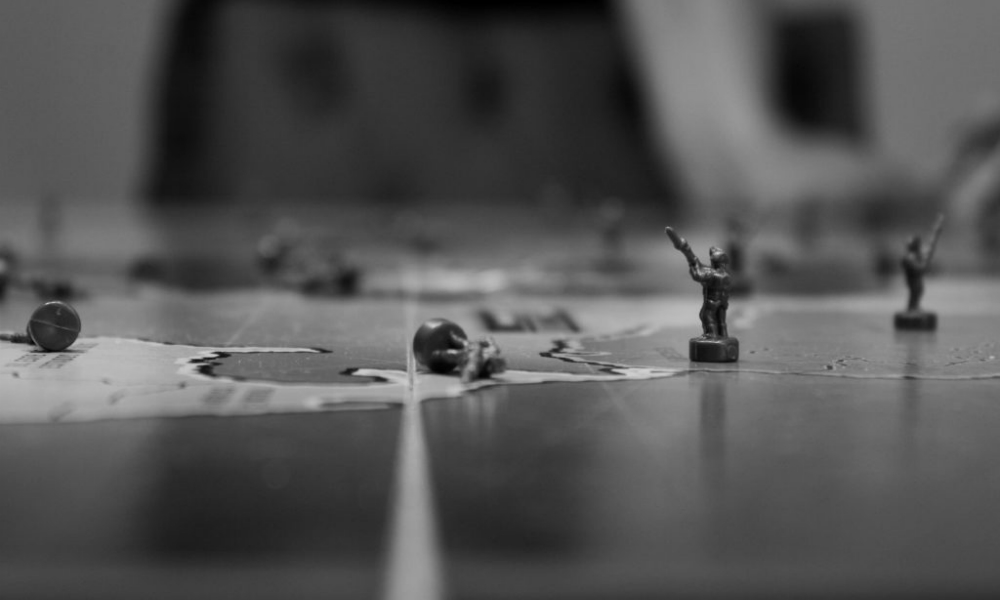 Ever get the sense something isn’t quite right? A feeling, an inkling, a tremor. Mothers get them from distant children; animals get them from inbound weather; and, apparently, I get them from reading definitions of “strategy.”

Confusingly, there are a lot of these definitions to sort through. The text I used to teach at West Point, Strategy in the Contemporary World (Fourth Edition), is chock-full of varying versions of “strategy.”

And they are not simply re-phrasings of one another. The closer you read the more you notice serious differences in philosophy and specificity. Philosophically, several emphasize scientific design, planning, and a product-based approach to strategy, while others describe a very different process of artful adaptation and dynamic adjustment. With respect to specificity, the split is between the definition’s narrowness—whether strategy is directly or exclusively related to combat and war—as opposed to a broader, general approach which typically alludes to more ambiguous concepts like “power.” Let’s look at some examples (all not cited below are from the aforementioned textbook).

–J.C. Wiley: “Strategy is a plan of action designed in order to achieve some end; a purpose together with a system of measures for its accomplishment.”

–Robert Osgood: “Strategy must now be understood as nothing less than the overall plan for utilizing the capacity for armed coercion.”

. . . versus a process-focused, continuous adaptation.

–Williamson Murray and Mark Grimsley: “Strategy is a process, a constant adaptation to the shifting conditions and circumstances in a world where chance, uncertainty, and ambiguity dominate.”

–Carl von Clausewitz: “Strategy [is] the use of engagements for the object of war.”

–Helmuth von Moltke: “Strategy is the practical adaptation of the means placed at a general’s disposal to the attainment of the object in War.”

. . . versus an ambiguous relationship to war.

–Sir Lawrence Freedman: “Strategy is the art of creating power.”

–John Gaddis: Grand strategy is the “calculated relationship of means to large ends.” (While grand strategy is conceptually distinct, the definition’s approach is representative and therefore germane.)

So what’s not quite right with these definitions? What’s raising the hair on the back of the strategist’s neck? If we unscientifically plot each of these definitions based on their relationship to these two key characteristics (planned design versus artful adaptation and combat-specific versus combat-ambiguous), we can see a gap emerge—and a potential solution materialize. 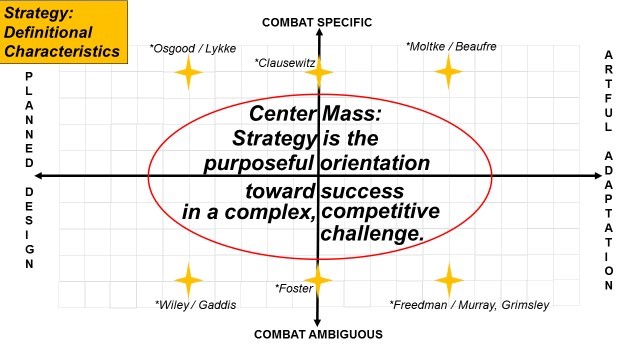 We require a definition that accounts for both strategy as a product (i.e. pre-planned documents) and strategy as a process (i.e. shifts and counters). Strategy is both, simultaneously. Anyone that’s served in any sort of command would recognize that strategy requires both long-lead design and shorter-term adaptation. Not merely a plan, but also a nimble approach, always prepared for adjustment to capitalize on evolving circumstances (as they say in car racing, “you win in the turns”). The definition should also account for fighting and war, but shouldn’t develop combat myopia and forget to include those things beyond the battlefield that influence a conflict’s outcome. War is about more than just warfare. We need a definition that can do all these things with concision and precision. So here goes:

Strategy is the purposeful orientation toward success in a complex, competitive conflict.

Purposeful: As in mindful, selected, or conscientious; there must be some decision for action (or decision for inaction). Strategy is judgment that precedes activity. Without decided agency, there can be no strategy.

Orientation: As in approach or lean. The Oxford English Dictionary defines this as the “act of orienting someone or something relative to the points of a compass or other specified positions; the relative position or direction of something; a person’s basic attitudes, beliefs, or feelings in relation to a particular subject or issue.” The compass metaphor is key, as an instrument which aids in direction-finding when looking down at the pre-drawn map as well as when walking across unknown terrain. The compass guides you equally when sitting still and running rapidly.

Success: Ultimately, this is always in the eye and the pen of the strategist. It can be defined many ways; the Fabian strategy seeks to avoid defeat while the Melian story salts the earth—both are valid success aims. With respect to today, I’ve argued a hallmark of our era is the defeat of military victory; in my opinion, nowadays, all we can hope for is strategic advantage, relative gain, and sustainable marginalization.

Complex: As in multi-variable, with many factors. Lawrence Freedman once wrote, “a general entering battle” must consider: politics, engineering, sociology, psychology, geography, history, and economics. That’s a lot, and war’s environment is often fluid, dynamic and nonlinear. The input doesn’t equal output. At war, one plus one equals apple, because the realities of converting blood and treasure to some policy aim twists math into absurdity. In short, it’s complex.

Competitive: War is always waged relative to an enemy or an environment. It can be one on one or one on many, but the important characteristic is there is some harm-threatening, opposing force. While each interaction isn’t necessarily zero sum, over the long haul, one competitor will come out ahead having secured a position of advantage.

Conflict: Something valuable is at stake in war. Moreover, strategy problems are often human problems and wicked problems. When one subtracts the bloodshed common to combat, this term might also apply to other fields like business, politics, and law.