WiFi Over Water: Misplaced Priorities in the American Way of War 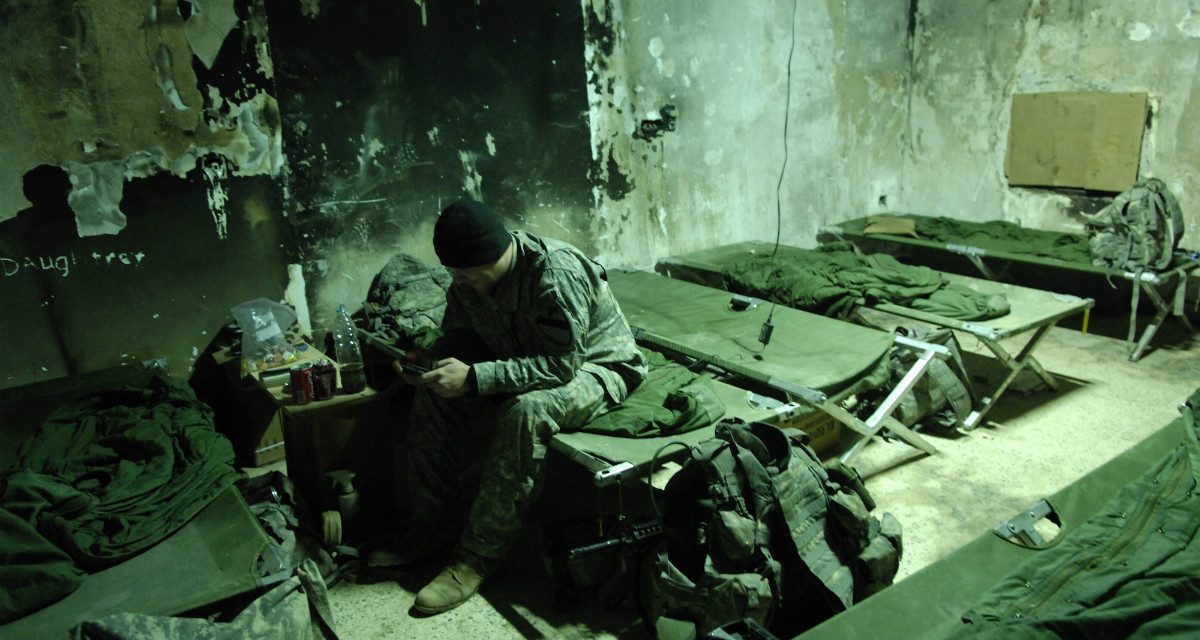 Our ground combat forces are not ready for the harsh realities of combat against a near-peer adversary. Our enjoyment of air supremacy and uncontested control of the electromagnetic spectrum—and the unlikelihood that either will continue in a major combat scenario—have been well documented. But arguably, the characteristic of our recent wars that represents the largest vulnerability is our unchallenged theater logistics—and the culture it has created among our soldiers and Marines, across all ranks, who have become conditioned to expect (and demand) uninterrupted access to civilian-like communications systems and infrastructure. Internet cafes, readily available WiFi, and freedom to use smartphones and tablets have become normal features of even the most remote patrol bases in Iraq or Afghanistan. What’s more, such access to instant personal communications in war zones has transferred to our pre-deployment training environments. Soldiers and Marines in the field use their personal devices to stay in touch with friends and family, play video games, or otherwise occupy idle time.

Commanders err, though, in believing this is somehow essential to troop welfare. This is not troop welfare; it actually causes immense damage to readiness. The fact that these seemingly innocent and routine parts of modern American culture have been adopted, accepted, and embraced by even our most Spartan-like units has not received the critical examination it deserves. As a military, we do not yet understand the consequences to our formations when these privileges disappear. What happens to morale, discipline, and unit cohesion when—not if—constant access to technology and connectivity comes into conflict with the harsh realities of future warfare envisioned by our leaders? More immediately, how does it affect discipline and readiness now? And what will happen to the unit that tolerates “business as usual” with respect to these privileges in the face of an enemy capable of detecting, targeting, and destroying concentrations of electromagnetic signals? It is essential leaders take seriously the implications of these questions—and their answers—and not turn a blind eye to the corrosive effect our laissez faire approach on this issue has on readiness and proper training.

As a rifle company commander in 2015, I eagerly prepared my Marines for Exercise COBRA GOLD 2015 in Thailand. The training area was extremely austere: facilities were virtually absent, resources were limited, and conditions were rough. As a leader, COBRA GOLD was shaping up to be a dream come true. I relished the opportunity to condition the company to the deprivations and harsh conditions of the battlefield. Unfortunately, our battalion’s water purification system did not arrive on schedule. Our logistics officer immediately recognized the dilemma of trying to hydrate an infantry battalion without this critical piece of equipment. However, the desperation he felt was his burden alone. The concern of others, including many leaders was something entirely different: When is the WiFi being installed? When will our electronic command-and-control systems be operational? When can Marines call home? How are they going to Skype with their families? It dawned upon me then and still weighs on me today: we are divorced from the realities that await us. We were, quite literally, prioritizing WiFi over water.

As with previous wars, quality of life for troops and other material concerns gained in importance as the wars in Iraq and Afghanistan progressed and theater logistics established bases of operations. However, unlike previous wars, our static positioning and unconstrained logistical capacity in these conflicts reprogrammed our priority hierarchy. WiFi arrived the same time water did, and many leaders demanded it. Post exchanges delivered XBoxes, televisions, and other luxuries. As the theater matured, our wants became needs. What were formerly “nice to haves” were deemed “mission critical.” This upending of the hierarchy of needs is almost entirely out of sync with the realities of near-peer, heavy combat. We must relearn that heavy combat drives us all lower down this hierarchy, where fighting for water, ammunition, and critical medical supplies is a daily reality. Wants will quickly become wants again. “Nice to haves” will be quickly forgotten. War has a ruthless way of correctly ordering our priorities. We must not wait to learn that lesson.

“Train like you fight”—anyone in uniform has heard the maxim. But soldiers and Marines do not train like they fight; they fight like they train. If we train in environments where troops can retreat into their smartphones or order a burrito from a dining facility truck that will deliver it to the training area, then are they truly being prepared for combat? In Iraq and Afghanistan, given the material comforts that grew up over the years of war, this wasn’t all that inconsistent with what units would experience in real combat zones. But if the Joint Operational Environment (JOE) 2035, a document produced by the Joint Chiefs of Staff and released in 2016, is our guide for what we may face in the future, it raises important questions. What steps are we taking today to train for that environment? If future enemies can efficiently detect electromagnetic signals and then deliver destructive fires, why do we let our soldiers and Marines take phones to the field? Why do our headquarters insist on sophisticated, heavy, electronically saturated systems? What effect is there on units’ combat effectiveness when soldiers are deep in cyberspace and less psychologically present in the real world? Are they focused on the task at hand, or on the family dilemma at home?

And while war will quickly fix these problems, it will do so at a heavy cost. We must remember that in the crucible of war, troops do not rise to the occasion, they fall to the level of their training. Leaders bear the responsibility for their shortfalls and any initially bloody result of our poor psychological preparedness.

Combat is the brutally unfair practice of killing. Our enemies are well aware of our weaknesses, and will exploit them. Enemy forces will press the soft underbelly of our logistics formations. Our forces in Iraq and Afghanistan have suffered logistical delays caused by threats like improvised explosive device. But future combat trains face the risk not of delay, but of annihilation. To overcome our logistics vulnerabilities, and the problems associated with them, we can take several important steps. First, for the sake of logisticians and our overall war effort, we should begin by reducing their burdens. We should harden their capacity to fight and deliver what units need to fight and win: water, ammunition, fuel, food, and medical supplies, among a few other basic necessities. The future promises a fight for those bare essentials. Next, we must condition our troops and their families to the reality of limited contact with those at home. For our force protection and servicemembers’ mental resilience, phones should be prohibited from field training environments. Our troops’ and their families’ first experience detached from web-enabled connectivity cannot be in a combat environment. And lastly, we should test units’ endurance in scenarios in which enemy forces deny their logistical priorities. If an enemy disrupts our water resupply, will the unit be able to adapt? During hard combat in history, American forces have had to fight for water. The JOE 2035 forecasts a battlefield when that fight may return in earnest.

Above all, we need to get our priorities straight: water over WiFi.

Maj. Travis Onischuk is currently assigned to the Department of Military Instruction at the United States Military Academy in West Point. He has done four operational deployments, including his most recent deployment as the Weapons Company Commander and Future Operations Officer, Marine Rotational Force – Darwin.