Winning the Deep Fight: Why We Should Return to Echeloned Reconnaissance and Security 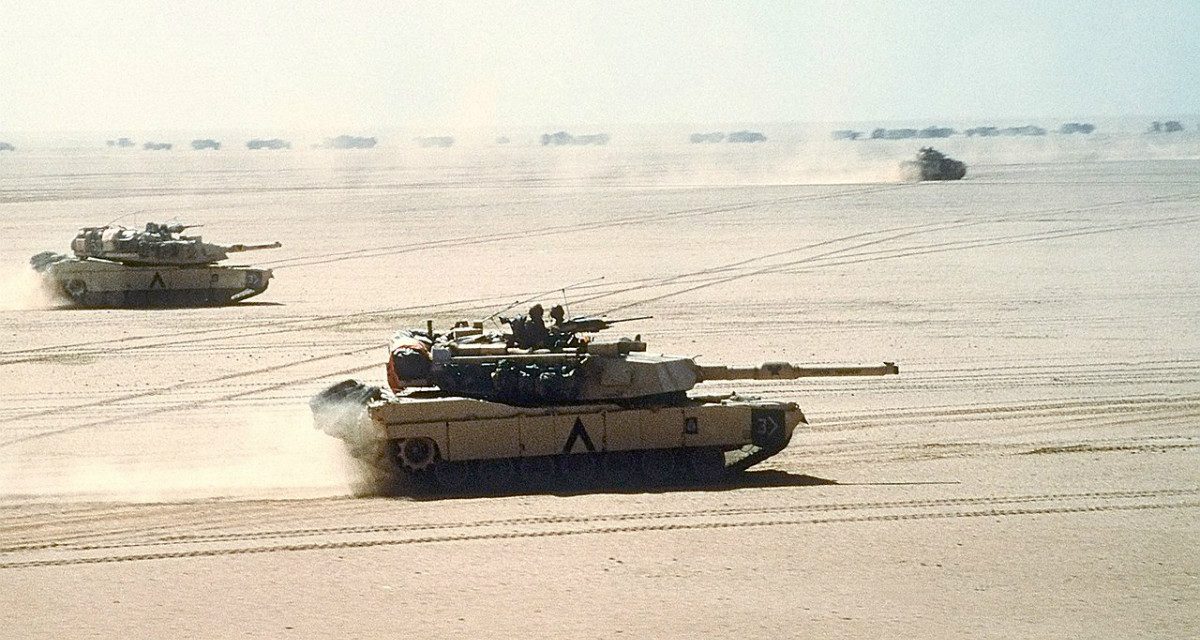 The dynamic, multi-domain battlefield of the future will undoubtedly create challenges for a wide range of the US Army’s functions. This is especially true for senior tactical echelons like corps and divisions as they modernize and focus on large-scale ground combat against highly capable adversaries. The requirement to execute reconnaissance and security operations, in particular, has emerged as an area of concern for Army forces as they prepare to fight across more expansive and lethal battlefields. So where should we begin looking for solutions to enable future success? As with many dilemmas about the future of war, pertinent insights may be found in the past.

Operation Desert Storm in 1991 illustrated how corps and divisions can employ echeloned reconnaissance and security forces to shape conditions for success during large-scale ground combat operations. In that offensive desert campaign, senior tactical commands relied on dedicated armored cavalry regiments (ACR) and division cavalry squadrons (DIVCAV) with cross-domain capabilities to fight for information, conduct counter-reconnaissance, prevent surprise, and more generally provide freedom of action for main body elements. VII Corps and the 1st Infantry Division, in particular, benefited from the coordinated actions of 2nd ACR and 1-4 CAV, respectively, as they maneuvered to envelop and destroy entrenched forces of the Iraqi Republican Guard.

The success of these combined-arms teams in the Persian Gulf, made possible by a fortuitous convergence of modernized capabilities and sound doctrine, provides insights for the US Army as it prepares for future campaigns. After a long period of counterinsurgency focus in Iraq and Afghanistan during which it discarded ACRs and DIVCAVs during the transition to brigade-centric modularity, the Army now faces significant gaps in its capability to execute ground reconnaissance and security operations at corps and division levels. While senior tactical commands currently augment, detach, and employ brigade combat teams or cavalry squadrons to meet echelons-above-brigade information collection and security requirements, ad hoc solutions are inadequate against peer threats for a variety of reasons. Most significantly, this includes a lack of institutional expertise that could only come from units dedicated for the purpose.

The US Army commenced the Persian Gulf War extremely well prepared for large-scale ground combat due to Army of Excellence reforms that reorganized its fighting formations to win in conflicts of mass and scale. This restructuring, which emerged from institutional reassessment following a prolonged and difficult war in Vietnam, stressed qualitative reliance on new fighting platforms with increased combined-arms integration. More importantly, the material improvement complemented the Army’s embrace of AirLand Battle doctrine, which emphasized coordination with joint forces to disrupt and destroy a peer enemy’s order of battle in depth. This renewed focus on large-scale fire and maneuver, as opposed to decentralized counterinsurgency, resulted in optimization for the exact kind of threat presented by the Iraqi Army and its Republican Guard in 1991.

Army of Excellence programs empowered US Army cavalry to support corps, and divisions, with tailored capabilities. Based on requirements to enable both defense-in-depth and deep attacks by outnumbered NATO formations, ACRs and DIVCAVs were organized and equipped as powerful air-ground teams designed to fight for information against highly capable Warsaw Pact adversaries. While the regiments included aviation, artillery, air defense, intelligence, engineer, and logistical elements to support armored squadrons, the divisional squadrons likewise owned organic aviation to support their ground troops. This matching of doctrine and capability enabled the ACRs to lead corps through enemy disruption zones, as DIVCAV followed to guide their divisions into the main battle area. At lower levels, battalions employed scout platoons to enable close maneuver and passage of lines.

2nd ACR validated this echeloned concept in February 1991 when it enabled VII Corps, as the land component main effort, to execute a sweeping “left hook” to defeat the Iraqi Army north of Kuwait. Attacking ahead of five coalition armored divisions, the regiment deployed its three armored cavalry squadrons—each boasting tanks, mechanized scouts, and mortars—on line to execute a massive reconnaissance-in-force to locate and engage the Republican Guard’s westernmost positions. Throughout the attack the command employed support from corps and joint fires, in addition to the ACR’s own organic artillery and aviation fires, to fix and annihilate portions of the opposing Tawakalna Mechanized Division.

2nd ACR’s violent encounter with entrenched Iraqi armor instantly revealed the benefits of late Cold War–era modernization programs. Decisions to field Abrams main battle tanks, Bradley Fighting Vehicles, self-propelled artillery, and both attack and scout aviation to the ACRs had produced agile combined-arms teams equipped to locate, penetrate, and dislocate defenses deep in enemy-controlled territory. While the regiment’s enhanced mobility, firepower, and protection allowed it to win decisive engagements such as the Battle of 73 Easting, its unique ability to operate independently across expanded frontages and depths opened fatal gaps in the Republican Guard’s defenses for exploitation by follow-on armored divisions.

This forceful reconnaissance created a window of opportunity, as then required by AirLand Battle doctrine, for VII Corps to maneuver into the main battle area with situational awareness about enemy unit dispositions. 2nd ACR passed critical information to allow arrayed DIVCAV to further develop situations for parent divisions. The 1st Infantry Division, in particular, exploited the forward regiment’s success on the corps’s right with an assault against elements from eleven Iraqi divisions.  As the Big Red One’s primary reconnaissance and security force, 1-4 CAV had been “up-gunned” with a tank company in theater while controlling its own scout and attack aviation. Leveraging both organic and externally provided fires, it developed the situation and answered the division commander’s information requirements without becoming decisively engaged.

Throughout the resulting offensive, 1-4 CAV executed a series of zone reconnaissance, mobile screen, and ad hoc attack actions as it provided freedom of action for its supported brigades. Pressured to maintain a relatively rapid rate of advance, it relied upon tank augmentation and air-ground integration to defeat Iraqi armor, report on trafficabilty of movement corridors, negotiate mass surrenders of Iraqi soldiers, and after the fighting ended, provide humanitarian assistance. The squadron also ensured adjacent unit coordination with the 3rd Armored Division to the north and, more critically, facilitated a complicated forward passage of lines through 2nd ACR while it engaged Iraqi forces. 1-4 CAV eventually advanced farther east than any other VII Corps ground element to secure Safwan airfield, the site of diplomatic negotiations that ended the war.

The US Army’s employment of dedicated, optimized, and echeloned cavalry forces in Operation Desert Storm revealed the enduring value of forward teams with cross-domain capabilities in large-scale ground combat. While VII Corps benefited from 2nd ACR’s aggressive reconnaissance and counter-reconnaissance that shaped “deep fight” conditions, the 1st Infantry Division—similar to the other divisions controlled by VII Corps and XVIII Airborne Corps—likewise benefited from 1-4 CAV’s proactive information collection and battlefield coordination. This type of echeloned sequencing across the entire land component front reflected critical contributions made by 2nd and 3rd ACRs and at least eight divisional squadrons to the achievement of coalition objectives.

Looking toward future campaigns of similar scale and intensity, the US Army should learn from its successes in 1991 and prioritize the fielding of reconnaissance and security forces with cross-domain capabilities. This means clearly recognizing the current dilemmas that corps and divisions, now bereft of the dedicated capabilities once provided by ACRs and DIVCAVs, negotiate when echeloning non-habitual reconnaissance forces to shape conditions in deep areas for attacking brigade combat teams. Such missions are too difficult to be considered tasks that any unit can perform well with a little practice; rather, they require dedicated formations with unique skills and capabilities. The requirement for contested information collection in non-permissive environments will only become more acute as peer adversaries and regional aggressors refine and improve anti-access and area denial defenses.

This deficiency in reconnaissance and security capacity ultimately represents an enduring requirement to bridge information collection across the tactical and operational levels of war. While 2nd ACR and 1-4 CAV demonstrated both the need and solution to the problem in Operation Desert Storm—similar to how 3-7 CAV would later enable the 3rd Infantry Division in Operation Iraq Freedom—emerging technologies in the twenty-first century suggest new possibilities for echeloning cavalry with multi-domain capabilities that combine traditional air and ground fires with cyber-electronic, space, and informational means. If the US Army intends to win in the crucible of combat against modern adversaries, its corps and divisions require combined-arms teams capable of leading them through the fog of war and setting conditions for decisive victory on the other side.

Col. Rich Creed is the director of the Army’s Combined Arms Doctrine Directorate at Fort Leavenworth, Kansas. He commanded Army organizations at company, battalion, and brigade levels and is a graduate of the School of Advanced Military Studies.

Major Nathan Jennings is a doctrine author in the Army’s Combined Arms Doctrine Directorate at Fort Leavenworth, Kansas. He is an Army Strategist and a graduate of the School of Advanced Military Studies.