Winning in an Era of Great-Power Parity: Lessons from the NFL 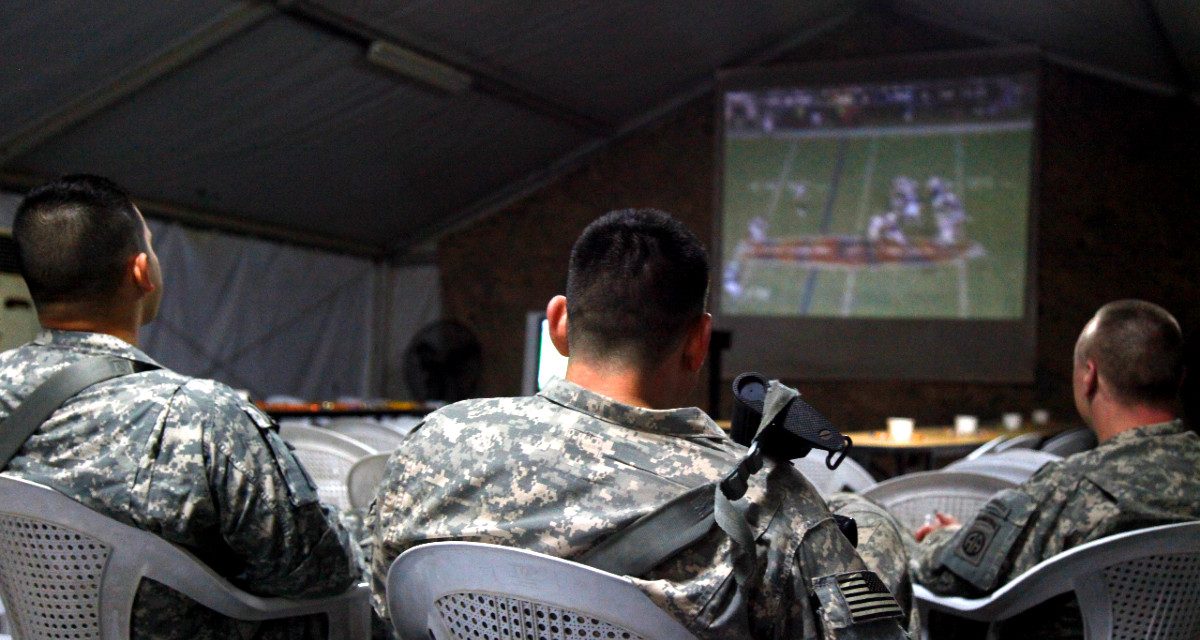 Green Bay Packers. Pittsburgh Steelers. San Francisco 49ers. Dallas Cowboys. What do these NFL franchises have in common? They were all dynasties. That is, they dominated the league, sometimes winning by large margins, and became associated with gridiron success in the decade in which they stacked up their championships. The Packers in the ‘60s. The Steelers in the ‘70s. The 49ers in the ‘80s. The Cowboys in the ‘90s.

What else do these teams have in common? As good as they were during their prime, their dynasties did not last. They were unable to outplay the competition indefinitely. Their players and coaches grew old or moved on. Eventually another team replaced them atop the league.

By some metrics, during these dynasties there appeared to be less competition than during times of parity because of the relative inequality between the top team and the others. Yet the efforts of other teams to win the Super Bowl had continued unabated. I’m sure there are plenty of team owners, coaches, and players who would consider it an affront to suggest that during these other teams’ dynasties, they did not compete for the championship. No, such thinking is preposterous. Americans like winners, and they play to win—during seasons with dynasties and during seasons of parity.

Likewise, during America’s international dynasty over the last three decades—its “unipolar moment”—there has been (and remains) plenty of competition. Despite surface-level appearances to the contrary during the post–Cold War world, while America has been preoccupied with terrorist groups, much competition has led to a relative rise of the rest. Russia and China have reformed and modernized their armed forces, adopted new operational concepts, developed new technologies, and integrated them into their respective ways of war. North Korea developed nuclear weapons, tested US and international will through a series of provocations, and continues rocket tests designed at placing a nuclear warhead on a missile capable of delivering it as far as the US homeland. Iran has expanded its proxy network rapidly across the Arabian Peninsula and Iraq, leading to robust networks across the Middle East providing them multiple options to supplement their traditional Lebanese Hezbollah surrogate. These actions have closed the gap, making the world less of a US dynasty and more one of international parity.

The Return of Parity (Not of Great-Power Politics)

Since 2000, the New England Patriots have dominated the NFL. Nine Super Bowl appearances. Six Super Bowl victories. The dynasty of all NFL dynasties. And this one lasting two decades. How has the Pats’ dynasty differed from those of some of its predecessors other than in length? They didn’t win by large margins. They usually would squeak out a win in the end due to their physical preparation, as well as their mental and emotional edge. The ‘60s Packers won their two Super Bowl victories by twenty-five and nineteen points. The ‘80s 49ers won one of their four by twenty-two points another by an astounding forty-five. In the ’90s, the Cowboys won their first two by thirty-five and seventeen points. In fact, the Cowboys’ smallest margin of Super Bowl victory that decade was ten points. That’s the same spread as the largest margin in a Patriots championship game since they began their dynastic run. They’ve won the Lombardi Trophy three times (and lost it once) by just three points.

This is in part because the NFL has increasingly designed its rules to promote parity. The institution of the salary cap, free agency, revenue sharing, and player arbitration have all increased parity across the league. Somehow, despite this governance structure, the Pats found ways to win more often than not. So much so that they often made it seem as if the outcome was predestined. They usually secured homefield advantage in the playoffs, advanced to the AFC championship game, and went on to the Super Bowl, where they came away with a victory two-thirds of the time.

How did the Pats always find a way to be in the hunt for a championship, regardless of the NFL’s efforts to ensure parity? Stability at the helm mattered. They maintained the same owner, head coach, and quarterback during their tremendous run. But other seemingly key players they let go. Still others they acquired as free agents after they had worn out their welcome with other teams. The NFL’s efforts at parity may have worked in making games close, but did not keep the Pats from securing what most sports pundits refer to as GOAT status—the Greatest of All Time.

The last couple decades of the NFL resemble the direction in which the international system is moving—toward parity. The unipolar moment the United States has experienced since the end of the Cold War is no longer. Russia and China have pursued national strategies, investment, and actions that have advanced their positions, while avoiding forays abroad that undermine their strength.

While great-power politics has always remained, great-power parity has returned. With it, the appearance of great-power competition has also returned. Just as in sports, however, this appearance is more a feature of the decrease in discrepancies between national powers’ total strength than it is an actual increase in competition. Competition only appears to have increased from an American perspective because we are now waking up to it.

Like the NFL, the international system is set up for parity right now. The United States is reverting to more of a retrenchment, but has been overstretched. The lack of agreed-to levels of burden sharing among NATO allies does not help. Authoritarian regimes use of social media, bots, state-owned media and business enterprises (whether officially state-owned or not), and smart technology that is making the world safe for autocracy is all going against America. The influence of nationalism and populism—perhaps reinforced by the COVID-19 pandemic—does not seem to be helping either. Nor are world institutions, largely set up by the United States after World War II, at the height of their effectiveness, reach, and influence.

America does have the most robust set of allies and partners of any nation, though, in large part due to its values and demonstrated combination of generosity and benevolence. America also knows how to win, and has done so repeatedly in the past—but not always. What remains to be seen, is whether the United States will be the Patriots of the next couple decades. Will the country have the strategic foresight to plan ahead—the equivalent of the Patriots’ mental toughness? Will the nation find a way to leverage national strength, diplomacy, information, allies, technology, economic vitality, private and public sectors, and competition into an effective twenty-first-century way of war to protect and advance its interests against other great powers in the face of increasing parity?

A Key Lesson to Apply

As US leaders navigate the future, they would do well to remember a number of dynamics and apply a simple lesson that we learn from comparing NFL dynasties and parity with the international system. Global dynasties rise and fall—just as they do in sports. It is a consistent dynamic of the international system. Competition continues unabated during the ebbs and flows of power parity and disparity. Competition becomes more apparent—and seemingly more important—during periods of relative parity.

America has squandered certain advantages and opportunities during this period, leaving it in a relatively less favorable position than when it became the sole superpower following the Cold War. The nation diverted resources to the war in Iraq, for instance, that it could have used to maintain or increase its advantage against other great powers. Even since then, America has been slow to change its focus. Some of its relative decline is US leaders’ fault; other aspects are due to structural dynamics—just as in the sports world. The analogy has its limits, however, and the factors involved are not entirely the same. In sports, those factors include the order of draft picks, free agency rules, salary caps, and other changes in the general incentive structure for teams and players. In the global sandbox, these dynamics involve the number of great powers, the difference between authoritarian regimes and democracies, the balance of resources, and the greater global commitments and interests that superpowers have compared to those of other powers. Despite missteps, America is headed in the right direction with its current National Defense Strategy oriented on great-power competition and, should deterrence fail, preparation for great-power conflict.

Amid fears surrounding the COVID-19 pandemic and widespread cancellation of sports events, revisiting the relevance of sports’ analogies to national security is instructive. The future will not look like the 49ers and Cowboys’ dynasties. The winner won’t “win” by large margins. The goal will be simply to come out ahead, with a position of strategic advantage versus one’s would-be adversaries, and to do so time and again.

The future of war is certainly one that will involve (and necessitate) technological developments such as hypersonic and anti-access weapons, rail guns, cyber warfare, satellites and other space assets, nuclear capabilities and proliferation, biowarfare, robotics, artificial intelligence, big data, machine learning, quantum computing, autonomous vehicles, swarming drones, and nano technologies. But it will not be one characterized solely by technology. On the flipside, neither will it be one entirely characterized by the human or political dimension. The future of war will be—as has always been the case—one marked by the integration of politics, human factors, and information wars (now supplemented and leveraged by social media narratives), new technologies, and new operating constructs. While there will likely be roles played by accidental guerrillas and perhaps by an accidental president, contrary to some assertions, there will be no accidental superpowers.

Just as in the NFL, physical and mental preparation is critical to win in the end, despite parity, and even if always a close call. America must out-think and out-prepare its potential adversaries; it must be the Patriots of the international system. Toward this end, the ability to walk and chew gum at the same time is imperative. We must be able to effectively address contemporary security issues while also emphasizing great-power competition, deterrence, ally assurance, and preparation for the “big fight” should deterrence ultimately fail. To do this, conventional and unconventional activities are both important. So too is the ability of the US Army to effectively implement multi-domain operations, with its required modernization, in concert with other services’ similar concepts, while protecting its people from pandemics, continuing sustained and small-footprint counterterrorism operations, and maintaining strategic readiness. These factors will determine whether future presidents have the tools necessary to effectively execute long-term policies and continually emerge ahead of adversaries.