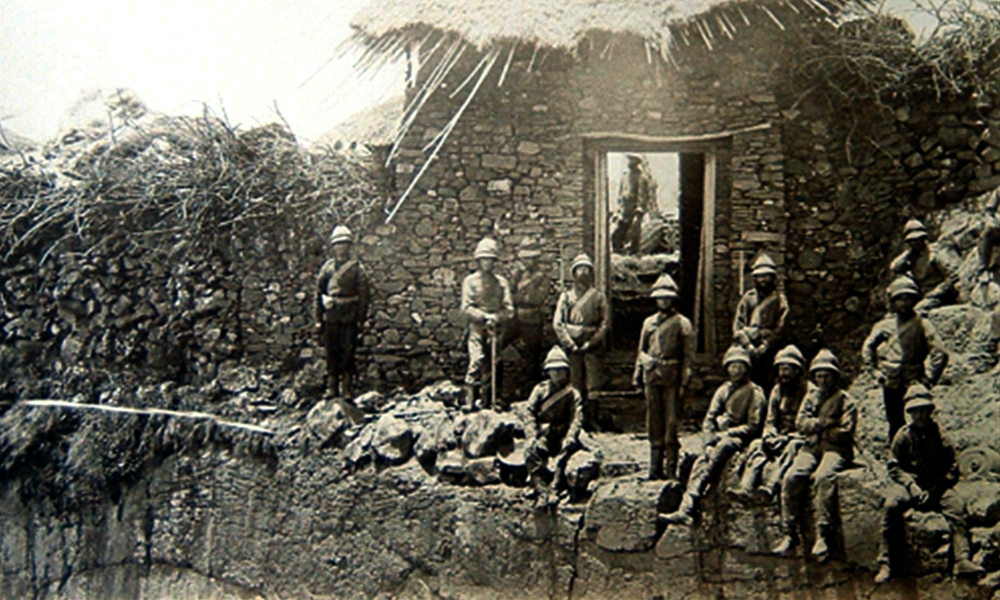 What was the first modern war? It depends who you ask. The Crimean War, American Civil War and Franco-Prussian War have all at various times been put forth as contenders. Yet, most contemporary conflict is fought outside the Western Hemisphere. If one is to include the history of Africa and Asia, then the British expedition in Abyssinia (generally present-day Ethiopia) is as good a candidate as any. Volker Matthies argues that the 1867–1868 conflict, which began with a British invasion aimed at freeing hostages held by Emperor Tewodros II, was the first humanitarian intervention in the modern sense of the term.

Just as the carnage at Cold Harbor in 1864 and at the Sedan in 1870 foreshadowed greater bloodshed at the Somme in 1916, this Victorian “Little War” has much in common with conflict today. There were war correspondents, railway lines, and modern weaponry (though supported by some 30,000 elephants, horses, and mules). The main difference between that intervention and humanitarian interventions of today was its scale: The British expeditionary force was comprised of 60,000 men; in the 1983 U.S. invasion of Grenada, less than 8,000 forces were put ashore.

Despite the large force there was no impetus to occupy the country—romantic notions of Abyssinia as the last Christian kingdom made an outright occupation distasteful. The conflict started when Tewodros took a number of diplomats, European citizens, and their servants hostage. He did so to use the captives as bargaining chips in a diplomatic dispute with the British Empire. The most notable among the British citizens was Hormuzd Rassam, a Mosul-born Assyrian well known for his important role in the discovery of the Epic of Gilgamesh.

For its diplomatic misunderstandings, logistics, and the colorful anti-war movement it generated, the conflict is worth studying. The Battle of Magadala is little known outside of Ethiopia (and to a lesser extent the United Kingdom). Matthies has thus done modern-day observers of conflict a great service with his superb work, The Siege of Magdala: The British Empire Against the Emperor of Ethiopia.

Kudos should be given to Matthies for this short (234 pages) yet comprehensive account, which draws on previously untapped sources (mostly German) to provide a complete picture of the campaign.

Whereas narratives that extend beyond the perspective of the European combatants in wars of the nineteenth century are unfortunately rare, the Ethiopian side is covered as much as possible in Matthies’ work. The author has done a remarkable job weaving political, military, logistical, and journalistic angles into a complete history. The book is made easier to read by ample use of sidebars where the writer spends several hundred words describing important side-topics.

As the Italians would learn in 1930s, and the Allies in the Second World War, warfare in the Horn of Africa is a quartermaster’s war. The British were fully up to this task. Deploying with massive numbers of animals, and even building a short railway, the expeditionary force built the infrastructure necessary to support a large army marching into the interior of Ethiopia for Magdala, the mountain fortress that Teowdros occupied and was far from the Red Sea coast.

The battle included relatively little actual fighting. Tewodros failed to use the terrain to his advantage, like a number of his modern-day dictatorial counterparts—Saddam Hussein in the First Gulf War, for example, and Idi Amin during the Uganda—Tanzania War. In both of these cases military power was largely aimed at solidifying political control, not at winning battles. Tewodros also used modern weaponry poorly. He had a large modern mortar that cracked when he tried to use it (a replica of which is located today in downtown Addis Abba.) If Tewodros had divided his forces and waged guerrilla warfare on the British supply lines, the conflict could have been extended, sapping at least some British will to continue the fight. In the end, as the British forces close in on Magdala, Tewodros apparently shot himself.

A curious, unresolved postscript to the conflict is the fate of period artifacts seized by the British. Following the capture of Magdala, British soldiers looted the place of its royal treasury. A group known as AFROMET has advocated the return of treasures. Yet, most of the items remain house firmly in the British Museum in London, an enduring remnant of this first modern war.