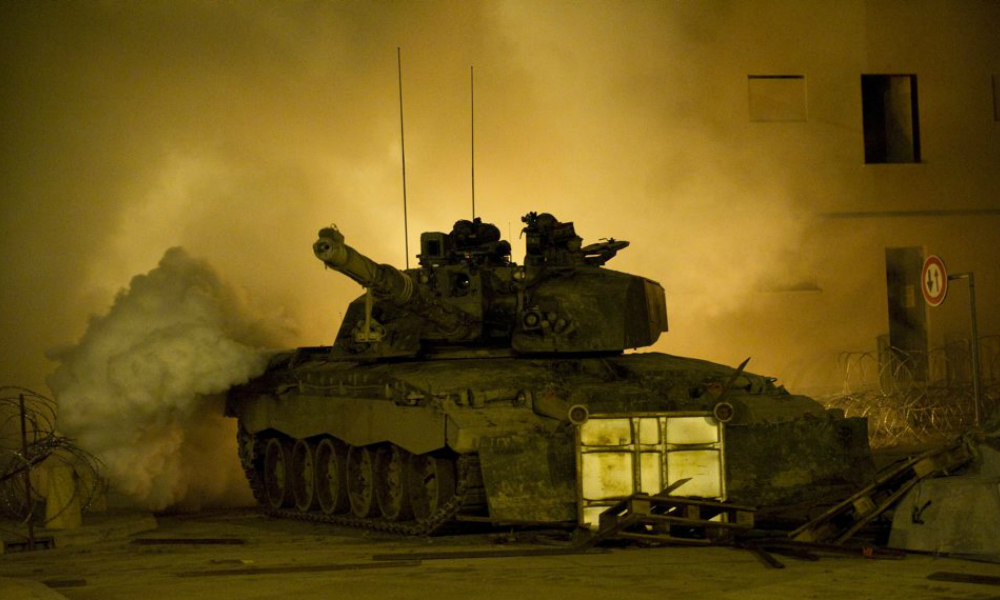 MWI Fellow August Cole proves this third point in his exceptional work of short fiction, “UNDERBELLY,” which “explores what war in Europe against an increasingly aggressive Russia might look like with a dramatically reduced US commitment to NATO.” The tale envisions a new role for the American Sheriff in which it only provides “logistic, intelligence, and technical support” to NATO in a crisis. Operation UNDERBELLY then, is a British-led, multi-national European military effort to drive back the Russians in the Baltics. And strategists, planners, and tacticians can apply today’s tools to learn from this fictitious future-look.

The After Action Review (AAR) is as common in the military as camouflage and crew cuts. The US Army’s FM 6-0 (Ch. 16) defines the AAR as a “guided analysis of an organization’s performance” to be conducted “during and at the conclusion” of an event for future improvement. While some mistakenly stick to a Golden Rule of Three (“Thou Shalt Produce Three Sustains and Three Improves”)—the AAR’s immense strength is its immense flexibility. In this case, one can apply a modified AAR to Operation UNDERBELLY, with a slightly simpler, two-part format: What happened in the fictional, near-future scenario? What might be learned for the (real) future? In no particular order:

The story describes a radically reduced headquarters element that operates in a British pub—more specifically, a “Cotswold countryside English pub, the Eagle Inn.” For planning purposes and for security’s sake, this true HQ element had moved off base, and left a “skeleton crew behind to maintain an electronic presence [which included a real corps-commanding lieutenant general] that indicated they were struggling to come up with a response” to the Russian incursion. The pub/HQ was “40 miles from the nearest military base” and secured and operated with “soldiers and spies in civilian clothes.”

There’s much to read on this postcard from the next war, especially considering that today most military HQs at the two- and three-star levels number on the order of five- to seven-hundred personnel. Recent planned reductions (of 25 percent) in these US Army HQs have drawn deep dissent (including from this author). But we live in a world in which the deputy secretary of defense reminds us of a new rule of thumb: “if you emit, you die”—and HQs in today’s size, composition, and electronic signature are essentially beacons for bombers. So it is useful to see the picture UNDERBELLY paints of what this might look like in practice. How do we create HQs that are small, hidden, and powerful enough to direct action in tomorrow’s war? Would this be sufficient, say, for all range of contingencies, from limited, discrete strikes, to multi-month counter-WMD operations?

The Sopranos Keep Marching Along

UNDERBELLY showcases a godfather-goddaughter relationship between British Maj. Gen. Hugh Fessenden, the commander back in the pub, and Lt. Wendy Mills, a junior officer in the Special Reconnaissance Regiment. During the mission, Fessenden “allow[s] himself a few seconds to worry” about her, and wonders if she’s “even alive.”

Our real experience, today, is that the military is a family business. My own is typical in that both of my younger brothers have served in the Army, as well as sisters-in-law on both sides of the clan. And, on the day I wrote this essay, another major in my office left work early to take his daughter in to see a US Navy recruiter. The military is indeed becoming more insular, inward-looking, and even incestuous (as the current, blood family is the growth source for the larger, organizational “family”). That fact in itself isn’t what’s interesting, but UNDERBELLY propagates a better question: what happens if this trend continues and even intensifies? If the military gets smaller and smaller and samer and samer, what might this mean? How does strategic judgment (e.g., Fessenden’s) change when tactical talent is chock-full of relatives at risk (e.g., Mills)?

The Fewest, The Proudest

UNDERBELLY features two principal characters in the HQ (Fessenden and American Army Col. Shane Williams), and a six-person team in Task Force Kant. It also alludes to a supporting cast of characters in a major operation that likely numbers, maximum, in the hundreds.

Wars continue, but the warriors are fewer in number than ever before. Army Historian Conrad Crane recently observed that, “Whereas about 5,000 occupied a square kilometer during the Napoleonic Wars, only 25 did during the 1973 Yom Kippur War.” Interestingly, Crane’s piece characterized future soldiers as fighting “alone”—which mirrors UNDERBLLY’s description of “each operator working alone.” The takeaway? It is safe to say this metric (number of soldiers per square kilometer) will continue to drop, perhaps all the way to one, in the near future. What will future war with radically few warriors look like?

Furthermore, a recent book argues democracy is ultimately dependent on war, that “manpower-intensive forms of warfare require the large-scale mobilization of the population, which forces elites facing external threats to grant political concessions to the common man.” This raises “an uncomfortable question” as we see the “emergence of new military technologies” that threaten to upset this relationship. The book’s authors ask: “When armies no longer need flesh and blood” then “what can take their place to stabilize democracy?” UNDERBELLY also raises this important spinoff question about Western-style democracy.

The fictitious operation was a physical effort to penetrate Russian cyber efforts: “TF Kant’s mission was to map and disrupt the new Russian command and control networks as well as the telecommunications nodes used to turn the Lithuanian population against NATO.”

Lesson for extraction: There is no such thing as a stand-alone, “pure” cyber operation. There are military operations with cyber targets or components. Like the Stuxnet case’s reliance on human efforts to infect computers at the Natanz nuclear facility with malicious code, military operations, even those touched by cyber, generally still require some human action.

Ditch the SINCGARS, Grab some Gmail(s)

UNDERBELLY described combat ineffective computer networks: “None of the defense networks could be trusted. Rather than fight it out in that corner of cyberspace, Fessenden decided to hide his command and control amongst the noise using a mix of couriers, coded messages, and misdirection. An array of one-time virtual private networks tunneled through Europe’s commercial bandwidth. Social media accounts for misdirection were essential.” This included the use of the “Snapchat app.”

Our lesson: communications will be compromised. There will not be one system or one platform that will provide assured comms. Instead, we will (and should) rely on many systems and many platforms to hide our signals in a lot of noise.

The story’s description of successful Russian attacks on British government digital networks featured a significant, direct impact on people. The Russians targeted “municipal power and water utilities near major British bases, threatening to destroy critical infrastructure for soldiers’ families if their units deployed against Russia.” Moreover, the British concluded “the entire [Ministry of Defence] email system was compromised,” which meant Fessenden “hadn’t sent an email” through the crisis and operational planning.

It is perhaps too obvious to report, but it seems our learning point here is to be prepared to rely on people. When networks fail and threats emerge, older solutions apply. In UNDERBELLY, the Russian infrastructure-hostage effort could be defeated by the simple resilience of neighbors helping neighbors. Fessenden had to quit using email and other info-sharing tech cold turkey; in response, he likely would have to rely on relatively ancient, unhackable technology like watches and pens. We’d do well to remember to “think human” and “think simple” in our fallback approaches as well.

The Truthiness Will Set You Free

The story hinges on a war of information: “a rapid virtual Russian takeover of telecommunications nodes in [Estonia, Latvia, and Lithuania that] locked out opposition voices. Local efforts at armed resistance to the Russian incursions were distorted into a narrative of a NATO-led anti-Russian cleansing campaign in the Baltic region, including a series of GRU false-flag mass-casualty IED attacks in Tallinn and Vilnius blamed on MI6 operatives.” In a moment that displays his writerly powers of observation, Cole comments on technology through one of his principal characters: “You can see everything and know nothing.”

The upshot: we too live in an era of exponential information warfare, in which strategists must find or develop in themselves an inner-Don Draper to secure the war’s narrative. Today’s wars are as much argumentative debate as armed struggle. What happens if YouTube and Periscope start to matter more than the conduct of actual, physical military operations? What will that mean for wars and our warriors?

These listed lessons are, of course, not exhaustive. And UNDERBELLY readers would do well to recall Edward Luttwak’s characterization of strategy’s paradoxical logic, in which a good road is a bad road because it is a good road (and so the enemy will likely attack there). Similarly, lessons learned from UNDERBELLY will ultimately rely on what Russian strategists would take from Cole’s story; those Russians will have also reacted to this narrative and perhaps as a result will consider alternate future courses of action.

And so these lessons from a fictitious future, just as with wars past and present, are uncertain. Yet, there is one certain value: the AAR’s analytical process serves a useful function in sharpening strategic assessment for the next real war.