An Army at Sea: Why the New FM 3-0’s Emphasis on Maritime Operations is So Important 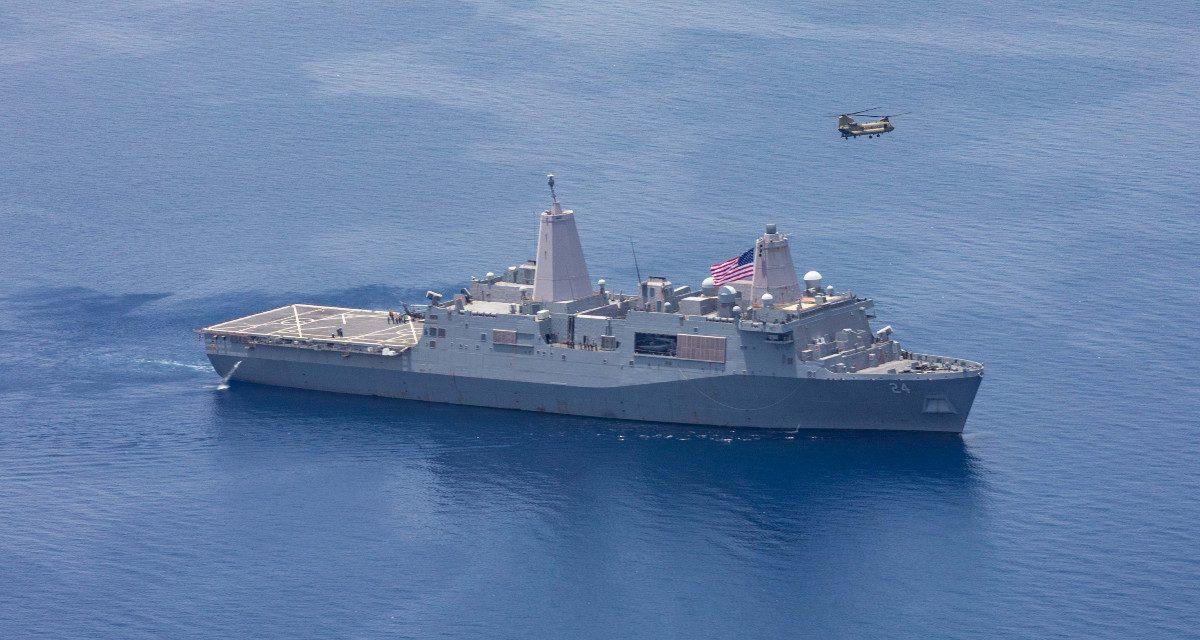 The newest iteration of the Army’s capstone doctrinal publication, Field Manual 3-0, Operations, establishes multidomain operations (MDO) as its primary operating concept. Building on previous evolutions in combined arms and joint integration that have defined warfare in the modern era, this advancement signals the Army’s intent to modernize and improve its capability to achieve successful outcomes across competition, crisis, and conflict paradigms globally. For the Army, the arrival of the new doctrine represents nothing less than a leap forward in its preparedness to deter, and if required, defeat adversary ground forces. Equally important, the adoption of a forward-thinking concept that prizes multidomain cooperation will allow it to more effectively lead and support joint and coalition efforts in expeditionary campaigns.

In addition to introducing MDO, the new FM 3-0 takes an unprecedented step: it dedicates an entire, stand-alone chapter to describing the Army’s unique and fundamental role in maritime operations. Recognizing the rising geopolitical importance of places such as the Indo-Pacific, Arctic, and Baltic Sea regions, the manual describes how the Army, as a land-centric service, can provide critical warfighting capabilities that enable joint and coalition success in maritime environments. The chapter, which details the characteristics of the domain and the roles and requirements of Army formations, strongly emphasizes the interdependence of naval, air, and ground forces in achieving strategic objectives across expanded distances typically associated with oceans and seas.

This emphasis reflects a critical aspect of the emerging MDO concept that fulfills, in part, the promise of the long heralded Pacific pivot for the US military. As explained by retired Colonel Rich Creed, the director of the US Army Combined Arms Doctrine Directorate, Army leadership “felt it particularly important to help the force visualize what was different for Army forces in theaters where campaigning would be heavily influenced by maritime considerations” —particularly in the “increasingly dynamic” India-Pacific region. Creed further described the subsequent doctrinal development, which he said stemmed from the historical appreciation that “the ability to project enduring power in maritime dominated domains is best achieved through multidomain approaches that include land forces.”

This shift to, or perhaps readoption of, a revitalized maritime focus in FM 3-0 finds ready precedent in the institution’s robust historical experience with conducting combat operations in riverine, littoral, and oceanic settings. Harkening back to storied amphibious offensives such as Winfield Scott’s coastal assault on Veracruz in 1847 and Ulysses Grant’s capture of Vicksburg along the Mississippi River in 1863, the Army has frequently cooperated with the US Navy, the US Marine Corps, the US Coast Guard, and, more recently, the US Air Force to enable the projection of American power in distant theaters. While technology has changed, effectively meeting the requirement for joint approaches that include proactive Army efforts has remained central to US military success.

Yet despite its early foundations, the Army’s seminal experience with maritime combat emerged in the crucible of World War II. When the US military suffered the shattering attacks by the Japanese Empire across both the Hawaiian and Philippines archipelagos in 1941, the losses catalyzed a massive reinvention by the Army to expand, modernize, and project landpower across the vast distances of the Pacific Basin in order to regain theater access and defeat Japanese defenders throughout a challenging and costly “island-hopping” campaign. If the initial Philippines disaster revealed the price of unpreparedness to contest the maritime domain, the eventual creation of an entire army group to retake Luzon and threaten the Japanese home islands reflected the capacity to adapt and persevere.

Simultaneous to the Army’s offensives in the Pacific, the institution undertook another amphibious event in Europe that would dwarf all others: the assault on the Normandy coast on June 6, 1944. Learning from previous—and sometimes troubled—landings in North Africa, Sicily, and Italy, the Army’s experience with attacking German fortifications at places like Omaha Beach, Utah Beach, and Pointe du Hoc required it to fight through harrowing conditions in order to regain continental access. An operation that Winston Churchill described as the “most complicated and difficult that has ever occurred,” the challenge of landing, breaching, and expanding lodgment required an unprecedented combined arms synchronization by airborne infantry, amphibious infantry, armor, and engineer units to carry the bloody assault.

However, these experiences with combat in the maritime domain required more than just inspired combined arms; the modernizing character of warfare demanded a sophisticated, symbiotic approach to joint operations to achieve victory. This entailed, in particular, close cooperation between the Army and the Navy to transport forces across the Atlantic and Pacific Oceans, establish intermediate basing in Australia and Britain, and then employ naval and air power to create favorable conditions for assault troop landings. In both the Philippines and northern France, perhaps representing the most intensive multidomain combat to that point in history, the Army accomplished its objectives only by enabling, supporting, and often leading task forces comprising diverse elements from across the US military.

This cooperative amphibious approach extended beyond the US services and into vital coalition efforts that resonate in today’s maritime environments. Recognizing the importance of gaining and preserving access, basing, and lodgment in expeditionary settings, Army commands in both the Pacific and Atlantic theaters worked closely with the armed forces of allied nations to secure forward positions, expand combat power, improve tactics, and ensure legitimacy. While British, Australian, and indigenous partners proved critical to enabling Army success in Guadalcanal, New Guinea, and the Philippines, similar partnerships with British, Canadian, and French contingents in Northwest Europe were equally foundational to American success and established an enduring doctrinal precedent for coalition integration.

The dedicated focus on maritime operations in FM 3-0, as part of its capstone design to establish MDO as the Army’s primary warfighting concept, thus reflects a return to, rather than a divergence from, historical norms. Just as in previous eras, the US Army in the twenty-first century is now recognizing the critical roles it must contribute to multidomain efforts by joint and coalition teams in contested areas such as the Pacific, Baltic, or Black Sea regions. This imperative takes on particular importance as the United States seeks to compete with, and if need be defeat, hegemonic adversaries such as China and Russia that seek to undermine international stability. The broadening of the Army’s doctrinal emphasis beyond traditional land campaigns marks an important step toward maturing that capability to better safeguard American interests.

Much of the Army’s contribution to joint efforts in the maritime domain is consequently evolving along familiar patterns. As the largest US military organization with a unique responsibility to provide theater logistics, develop theater infrastructure, field air and missile defense, and secure forward basing, the nation’s oldest service will continue to enable joint efforts in expeditionary settings. Given the vast expanses and noncontiguous terrain that often characterize maritime environments, the Army’s ability to modernize and maintain these capabilities will remain crucial for the US military to defend forward bases and, if need be, conduct joint offensives to secure vital interests. Of these contributions, the fielding of robust and layered air defense shields, in particular, represents an irreplaceable prerequisite for American campaigns that only the Army can provide at a persistent scale.

To that end, as described by the new doctrine, Army forces contribute to joint efforts by applying the tenets of agility, convergence, endurance, and depth to achieve multidomain effect. The requirement for achieving convergence in maritime theaters, in particular, reflects a central emphasis where ground elements fight to “create exploitable opportunities” and help “maintain freedom of action and associated positions of relative advantage,” which in turn enable mission accomplishment.” This integration and synchronization, moving beyond traditional combined arms tactics by leveraging capabilities from across all domains, services, agencies, and partners to penetrate and dis-integrate enemy layered and standoff architectures in detail, becomes especially acute during large-scale combat operations where the Army can create more durable “windows of opportunity” for maneuver by naval, marine and air forces.

Looking toward an uncertain future, the new capstone doctrine thus sets conditions for the Army to expand and modernize its irreplaceable contributions to joint and coalition maritime success. While the Multi-Domain Task Force initiative has made progress in providing enhanced kinetic, informational, and electronic fires to joint teams in the Indo-Pacific region, the Ukrainian army’s sinking of the Russian cruiser, Moskva, though anecdotal, illustrates the potential for land-based strike systems to influence and enable sea control. This capacity to cultivate conditions for joint maneuver and to defend maritime areas from land will likely only increase in the near future as Army modernization programs integrate long-range fires, next-generation air defenses, an array of emerging drone capabilities, cyber and space effects, and artificial intelligence–enabled targeting.

In the final analysis, the new FM 3-0 signals a new commitment to embrace a more comprehensive multidomain approach to maritime operations. As argued by Secretary of the Army Christine Wormuth, the institution will “serve as the linchpin service for the joint force” and “provide command and control at multiple operational levels to coordinate, synchronize, sustain, and defend ongoing joint operations.” This means that the Army, though traditionally focused on winning in land campaigns, will evolve to play an expanded and multifaceted role in maritime contests. Seeking to complement, rather than replace, traditional naval and marine competencies, the shift in doctrinal emphasis represents a return to previous eras where Army soldiers stormed beaches and scaled heights to secure interests abroad and safeguard freedom at home.

Lieutenant Colonel Nathan Jennings, PhD, is an assistant professor and Army strategist at the US Army Command and General Staff College.

The views expressed are those of the authors and do not reflect the official position of the United States Military Academy, Department of the Army or Department of Defense.