Army of Coders: Training the Force for the Multi-domain Fight 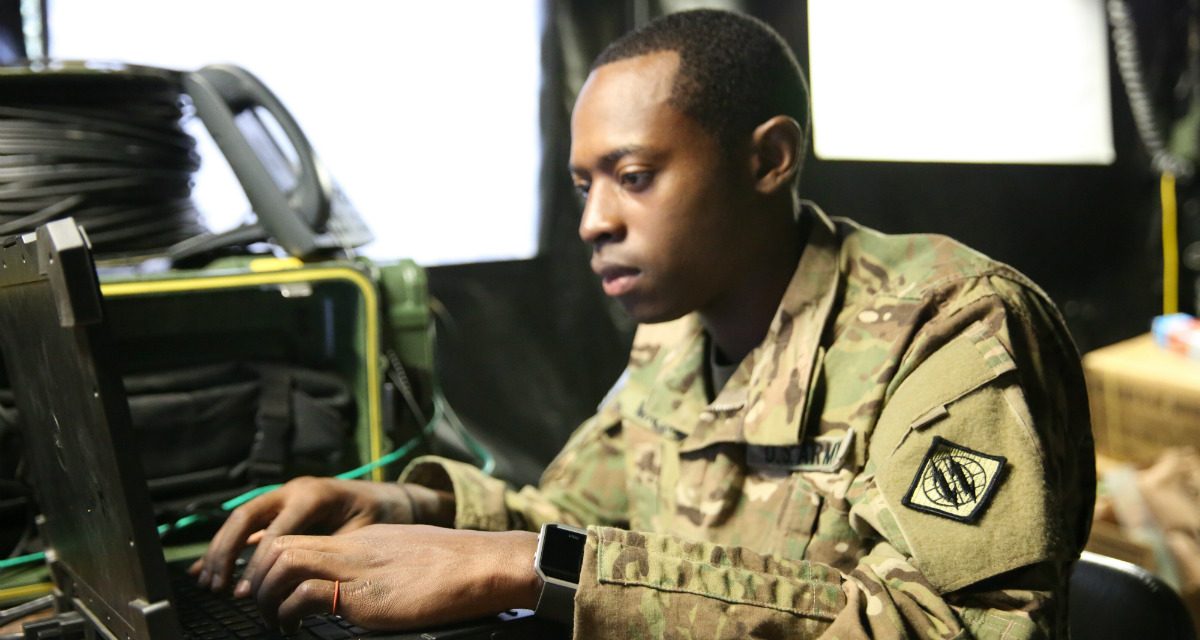 It is perhaps axiomatic, and thus seemingly unnecessary, to say that computers have transformed modern war. But they have in ways both large and small; they have, for example, become deeply integrated with the full range of Army operations—part of a broader convergence of domains and thus part of a pattern that has led to the development of the multi-domain battle concept. The problem, however, is that military technology training has failed to keep pace with rapidly growing capabilities. The result is that despite expanding digital footprints, most soldiers might as well be using typewriters, analog telephones, and chalkboards when it comes to the capabilities they bring to bear in pursuit of military objectives. Despite technology’s massive potential, waiting to be harnessed by members of the most advanced fighting force the world has ever seen, soldiers without basic computer programming skills cannot automate simple tasks, integrate data sources, or effectively leverage the unending flow of information.  Since near-peer adversaries have access to the same computers and networked connectivity we do, if they train their soldiers to do these thing—automating tasks and integrating data sources in real time—they can overwhelm our operational tempo and gain a dominant strategic advantage. The key to preventing our rivals from outmaneuvering us digitally, and thereby enabling them to outmaneuver us on the battlefield, is empowering our soldiers to harness the power of the tools they already have. If we do not, we risk being on the wrong side of near-peer technology dominance.

The challenges of harnessing technology within DoD have led to the creation of a variety of advisory bodies, including the Defense Innovation Board. This board, chaired by former Google CEO Eric Schmidt, is comprised of distinguished leaders from across America that provide policy recommendations.

One of the board’s current recommendations is to embed computer science as a “core competency of the department through recruiting and training.”  Essentially, fulfilling this recommendation means providing skilled programmers to tactical commanders, so they can apply agile practices to create solutions for localized military problems.

Recruitment efforts have struggled as integrating externally trained talent and translating battlefield needs into effectively implemented programming solutions remain difficult. The need to bring in talent, and the challenges those programmers will face, compound daily as legacy computer systems are buried under newly acquired programs creating digital labyrinths. The result is a window of opportunity ready to be exploited by near-peer adversaries that better assimilate technology.

But where do we begin to solve this problem?

Begin now with the soldiers we have.

A strategy of stratified computer skills is the most flexible and effective way of addressing this challenge. It should begin by training existing soldiers, creating a talent pool complementing existing DoD efforts. The field of military trauma medicine offers valuable lessons that should inform such an initiative.

Military trauma medicine teams’ success owes much to their placement of trained personnel from the point of injury on the battlefield through advanced surgical centers in safer locations. This stratification approach trusts lower echelons to address non-urgent injuries so experts can focus on extreme cases, while also creating a system whereby medical personnel at point of injury can stabilize casualties enough to be able to evacuate them to successively higher echelons, at each of which they receive more comprehensive care.

This cascading approach could be applied to technology by providing basic computer training at the tactical level and creating clearly defined higher echelons of expertise. This would enable soldiers with training from basic coding through advanced schooling to take ownership of technology challenges in domains like data management and cybersecurity.

Challenges exceeding tactical-level expertise could be forwarded to more skilled programmers at higher echelons, and each level of digital enablers could further refine problem statements for generating technical solutions. In this system, a low-threat problem, like troubleshooting a planning document generator tool, could be handled within a brigade. Complex challenges, like structural issues or feature requests for Army programs like the Digital Training Management Systems or civilian products like Palantir, could be relayed to department-level experts or civilian program managers. Cybersecurity breaches identified at lower levels could pass through the same system, allowing more rapid notification for Cyber Command or appropriate non-DoD agencies.

This approach would bridge the current gap between Pentagon-level expertise and ground-level challenges, since deploying an expert is generally ad hoc, expensive, and slow. This approach also accelerates integrating commercial solutions when required through a pipeline that rapidly generates requirements documents so groups like the Defense Innovation Unit can create contracts with external vendors. The power of connecting tactical problems with commercial computer experts has been demonstrated by multiple Air Force programs like Kessel Run and could be replicated by the Army.

Solutions generated with this approach could be shared through an open-source forum providing enterprise-wide access to applications and solutions. The recurring frequency of similar problems across DoD means a unit solving a common issue like managing range reservations during training cycles could share that force widely and compound savings enormously.

This strategy also allows commanders to leverage the talent and technology currently within their formations; and, saving time and energy with this approach enables enhanced focus on the mission.

Use training options that already exist.

While critics may contend talent shortcomings prevent stratifying efforts, the success of veteran technology transition programs demonstrates we already have the right people. The first step in expanding computer skills from a niche capability to a baseline soldier competency is giving them the permission and the tools.

DoD network permissions are currently designed to limit computer functionality to enhance security, including mechanisms that prevent soldiers from running executable files or downloading programs. Network policies should mirror the responsibility given to soldiers in combat, where they operate at enormous personal and political risk using equipment that costs millions of dollars. While unregulated distributed permissions would expose us to new risks, the risks associated with expanding permissions can be mitigated through training. Denying functionality to enhance security ignores that our networks have consistently been breached despite this approach. Moreover, limiting tech-enabled potential exposes our soldiers to the strategic risk of an enemy that creates an operational tempo we cannot match.

Besides giving soldiers permission, allowing them to begin working with digital systems requires them to be given access to training. Online training can have immediate impact and include existing government databases, university courses, and nanodegrees from educational institutions. Grants could be provided for soldiers to address certification costs or online course fees, expanding existing programs for cyber soldiers to the rest of the army.

A priority effort towards standardizing baseline competency is expanding the pool of soldiers with key computer certifications, like Cisco Certified Network Associate. While critics may argue that individual certifications have niche applications, challenges as commonplace as adding network printers benefit from this approach. Certifications also offer an objective training metric and evidence of soldier competence that can be aligned against specific requirements.

Immersive opportunities like coding bootcamps and short fellowships are the keystone for this training approach. Here again, the field of military trauma medicine gives examples for scaling immersive training, from one-day courses in battlefield first aid to the thirty-six-week Special Operations Combat Medic Course, that create tiers of multidisciplinary experts capable of everything from basic but vital medical care in austere environments to advanced care. The immersive training options should be open to all military occupational specialties to spread high competence levels across the force and diversify problem-solving applications. This diversity approach has precedent in the infantry’s Ranger School, which allows volunteers from across the Army admission to its exceptionally demanding training. While an initial physical fitness assessment screens students for baseline competencies, student diversity lets it inculcate the warrior ethos Army wide. Likewise, applying this approach for immersive digital training would introduce baseline computer competence to groups without a culture emphasizing digital literacy.

While there are many topics for immersive computer training, a few that have become essential to modern warfighters—and will become increasingly so in the operating environment of tomorrow—are programming, data science, networking, and cybersecurity.

Programming is at the heart of automation. Almost any task that soldiers repeatedly do on a computer can be programmed for automatic execution. Microsoft products are integrated into most DoD workflows so general programming fundamentals should include specific applications on those platforms and bias towards programming languages like Windows PowerShell and Python.

Data science is a combination of sub-disciplines and features like statistics, algorithms, and information theory—think Moneyball with bombs and bullets. Data science exploits data to drive better decision making, from planning battlefield logistics to improving the precision of targeting efforts. As the volume and granularity of data continues to increase, mining and managing it for insights would allow our soldiers to gain a dominant advantage over the enemy.

Networking allows soldiers to understand the connections between digital infrastructure—computers, smartphones, satellites, and even vehicles and a range of other increasingly connected platforms. Network training enhances data collection and sharing while decreasing the risk of losing or disclosing data, thereby optimizing digital systems. Soldiers with network training are better positioned to deploy electronic warfare countermeasures preventing rivals from discovering digital signatures that can be used for mapping or targeting, like Russian forces have done in Ukraine.

Cybersecurity training allows soldiers to defend networks, which is increasingly vital as data collections and operational capabilities become more central to combat operations. As computer competence increases, the value of targeting these tools becomes a higher priority for rivals. Russian cyber operations in Ukraine demonstrate the need for soldiers to understand how to thrive on the digital battlefield. When the enemy does compromise networks, cybersecurity training allows soldiers to react effectively to ensure breaches do not become catastrophes.

Empowering soldiers outside the few branches typically associated with computer skills would allow existing experts to pursue more complex challenges. Programs that expand digital talent pools would enable other government cyber initiatives by boosting the number of experienced DoD programmers. The result would be an agile Army equipped to outmaneuver near-peer rivals in an era where technology very much dictates operational success.