The Army’s New Advisory Units Don’t Need the Best Officers, They Need the Right Ones 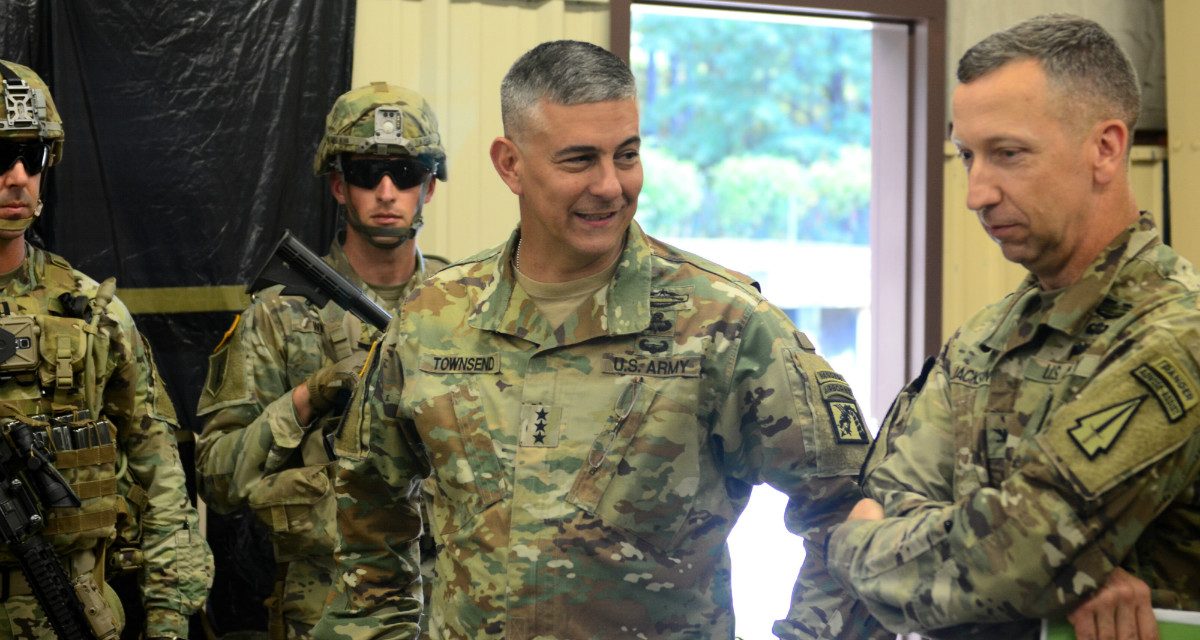 Soon, officers being considered for assignment to future security force assistance brigades (SFABs) will be assessed before being placed on orders. In contrast, officers in the 1st SFAB were hand-selected and assigned to the unit—a significant investment in talent that reflects the priority Army leadership is giving to the SFAB mission. The 1st SFAB got the best officers each branch had to offer. But such a model will likely prove unsustainable as five more SFABs are stood up and with competing demands across the force for the same pool of leaders. Further, “best” does not necessarily mean “right” for the advisory mission.

And so, the SFABs are adopting an assessment program to select officers. The 1st SFAB already utilizes an assessment and selection process for enlisted volunteers, which largely aims to validate job-specific skills. And, it appears to work: roughly one-third of enlisted candidates are not selected. Officers in the 1st SFAB have participated in a similar validation, but were already relocated to Fort Benning and assigned to the unit beforehand. So as the SFABs become true all-volunteer organizations, the assessment model will become the critical mechanism to ensure units have the right people for the task.

Col. Scott Jackson, the 1st SFAB commander, recently outlined the assessment’s two purposes: “First, to validate that a candidate can meet Army directed and organizational standards derived from our mission profile. Secondly, to confirm that candidates possess the desired mental and personal attributes to be an effective advisor.”

Very little of the four-day assessment has been made public. This is in part, perhaps, a deliberate effort to keep candidates from knowing too much about the process and observe individual behavior in settings that replicate the ambiguous conditions in which advisors may find themselves operating. But it is also likely that some of the details are still being worked out. The assessment’s still-under-construction status provides an opportunity to envision what an ideal version could and should look like. To that end, in order to select the right people, there are a few things that should be included, and a few that should not.

One of the most vital personality traits to assess for a potential SFAB officer is how he or she interacts with others in social settings, formations, field environments, and elsewhere. Unlike the recommendations to follow, assessing these characteristics would require near-constant observation of group dynamics over the course of the evaluation period.

Over the course of several days, the assessment should include a combination of social events to allow observation in casual settings, as well as group problem-solving activities such as a leader reaction course. Combined, these events will showcase individual behavior in a variety of environments—included stress-induced ones.

The intent should be to identify who emerges as a leader—the person to whom others seem to naturally gravitate and who demonstrate an inherent ability to build rapport and even respect. These individuals may be best suited for command advisor roles. Equally important would be determining who seems more apt to operate in the background, or as a team member. While these officers may be equally dedicated to the mission, they may be better suited for vital SFAB support and staff positions rather than direct advisor roles.

There is a risk of over-generalizing based on the assumption that certain personality types are necessarily better suited to particular roles within the SFAB mission, but a four-day window provides a limited assessment opportunity. While the assessment may initially put officers in certain bins, nothing would prevent personnel moves within the SFAB if conditions change—as is standard in any Army organization.

The next components should focus on intellectual or cognitive assessments, and include the Defense Language Aptitude Battery (DLAB), a personality/psychological exam, and a one-on-one interview. For a unit designed to operate in foreign countries, the DLAB is the Army’s tool for determining aptitude to learn a foreign language. Even if linguists are available, the ability to develop a functional grasp of the host nation language—especially if language training is dropped because of rushed deployment timelines— is critical. An ability to communicate directly, even if only rudimentarily, helps establish trust and deepen personal connections. To save time, this test could also be made an application prerequisite.

A personality/psychological test will help filter out officers with traits that simply make them less suitable for service as an advisor. Similar tests are used in other unit selections already. In this case, identifying “negative” or “undesirable” does not necessarily mean finding character flaws—which would still raise concerns—but rather a personality mismatch. Taking a longer view, comparing the data generated by this portion of the assessment to individual officer performance over time will provide metrics against which future advisors can be assessed. For instance, falling outside a certain band consistent with former exceptional advisors may trigger additional screening or disqualification.

The final event in in this category would be a one-on-one informal interview. Here, assessors would engage SFAB candidates on a number of topics, ranging from the last few books the officer read, to their grasp of contemporary global security issues, to personal hobbies or passions outside of work. These interviews provide a venue to both gauge the officer’s scope of curiosity and breadth of awareness of current events. An interview would also provide an opportunity for a social assessment through a more personal conversation that would augment the group dynamics assessment.

How much weight an advisor should be able to carry, or even whether it is a valid measure for a potential advisor, is debatable. But there is a real and important reason that virtually every Army screening process begins with some physical test. For the SFAB assessment, the physical events are less about scores—though that is still an indicator of military professionalism—and more about gauging grit and effort. To some degree, demonstrating maximum effort in all events may be more important.

If home-station units can be relied upon to ensure candidates can pass the Army Physical Fitness Test, the SFAB assessment presents an opportunity to do something different. The Army Combat Readiness Test and High Physical Demands Tasks test may be more appropriate for a unit destined for combat, and together the two evaluate a broader scope of strength and stamina. Combined with the Leader Reaction Course, there are several fitness-based mechanisms in place to better determine grit, holistic fitness, and group dynamics.

Bringing it All Together

Ultimately, the assessment has to determine each officer’s potential to advise, and should thus include an event focused on observing each officer’s ability to teach and coach. This could involve officers being given instructions to complete some sort of fairly simple task—setting up a sleeping tent, changing the tire on a Stryker, or placing a tactical radio into operation, for example—something with very specific steps. After familiarizing with the task, officers would move to a site where they would walk a “commander” or “host-nation team” through the steps without directly intervening. This would be an opportunity to gauge patience, demeanor, and ability to communicate clearly.

A second one-on-one session could then follow, in which each candidate meets with a member of the SFAB command team. Candidates would be asked questions related to performance of the cadre involved in the assessment process, positive and negative attributes of the assessment program, and the challenges the SFAB faces in its mission. This would not only feed into a process of refinement for the assessment itself, but would also assess a candidate’s ability to provide honest, thoughtful, and constructive feedback. If a major is expected to advise a colonel in the advised force, evaluating his or her ability to provide thoughtful counsel to a US Army colonel is a reasonable assessment component.

What the Assessment Shouldn’t Be

As Army Chief of Staff Gen. Mark Milley has unequivocally said, the SFABs are not Special Forces. So, while the assessment may borrow some SF testing components, the SFAB should not endeavor to replicate the longer and more arduous SF evaluation.

The assessment should not include long duration dismounted movements with heavy loads—focusing too much on these types of physical events may prevent evaluating more critical personality traits. Such activities are appropriate for SF and Ranger assessments, but those units have very different mission sets, and more time dedicated to evaluating potential recruits.

Also, the SFAB assessment for officers should not be overly focused on individual tactical skills, weapons system mastery, or proficiency in small-unit tactics.  This is not to say these skills and capabilities are unimportant—they simply should not be the focus of an evaluation. Once assigned to an SFAB, attention to such skills makes more sense when more time is available. On the whole, the assessment should focus less on what officers have learned in their military careers—particularly if those things can be taught and refined with the SFAB—and more on who the officers are, those traits that will often determine their success as advisors.

Alongside the creation of a permanent, institutionalized assessment system, a structure needs to be developed to professionalize and manage the assessment process. To date, the assessments have focused on assignment only to the 1st SFAB, with the event manned and operated by members already assigned to the unit. There is no office dedicated to this mission, but there should be. The Military Advisor Training Academy is a potential choice, but whether its current manning can support both its core instruction function and recurring assessments is uncertain.

As the SFABs finalize the plan for assessing and selecting future advisors, they will need to clearly articulate what it is they expect of their officers. With that in mind, all efforts within the short assessment window should be geared towards observing those desirable traits. While some aspects borrow from various special operations selection processes, the intent is to use proven systems—not to replicate that community’s mission. If anything, this is an opportunity for the special operations community to partner with the SFABs to ensure best practices are captured and implemented.

As the SFABs transition to full volunteer manning, the assessment will gain much more importance. While handpicking top-performing officers worked for the 1st SFAB, that practice is likely not feasible without a substantial end-strength increase. Every organization is competing for this same group. Ultimately, the assessment must be less about validating the top performers and all about finding the right fit for the task at hand.