Artillery in Tomorrow’s Wars: Maximizing the Power of the King of Battle 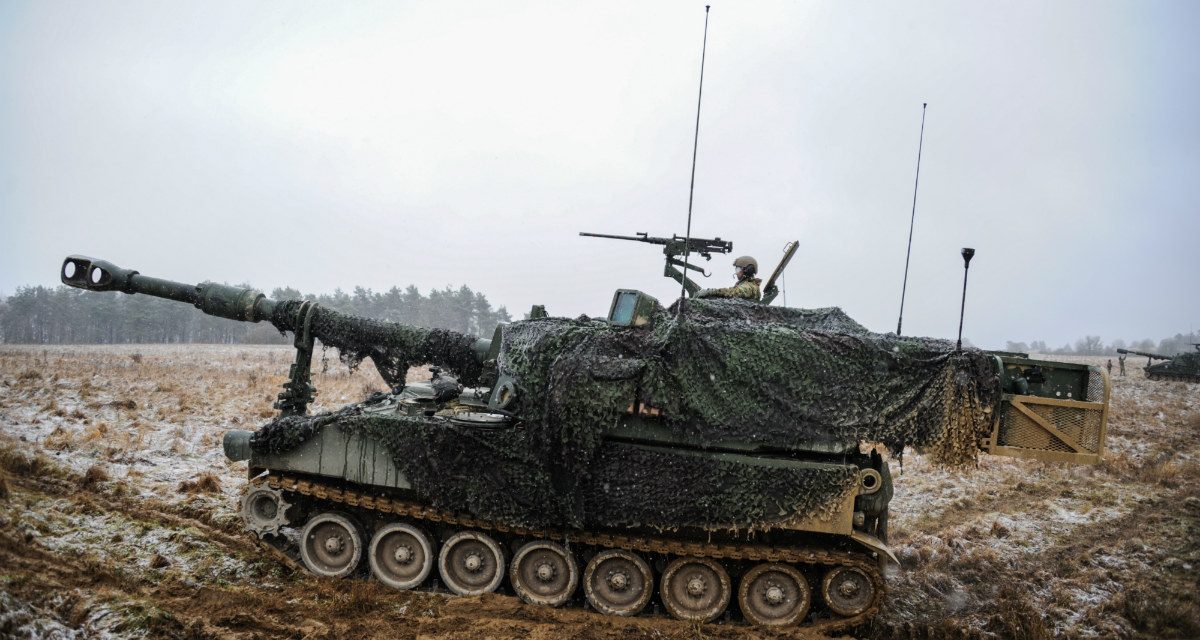 It’s an early summer morning. All is quiet on the battlefield just before the battalion will rise for the next day’s preparation and movements. Soldiers on guard, sleepy-eyed and nearly dozing off hear a faint buzzing sound, and suddenly, their eyes spring wide open, their ears are perked, and adrenaline pumps with full force throughout their bodies. “Drones!” one guard shouts, as they all dive for the nearest cover. It’s too late. Within moments, dozens of rockets come screaming down from the heavens, raining a hailstorm of hell on the battalion’s positions. Cluster munitions burst, steel shredding man and machine below. Thermobaric warheads erupt with terrible concussion, the overpressure instantly killing those who sought comfort in their enclosed shelter. In just three minutes, the entire battalion lies crushed in a smoldering flame, destroyed by a concentrated barrage of rockets and missiles fired thirty kilometers away.

This is not science fiction. It is the tale of a Ukrainian mechanized battalion in the Donbass, smashed to pieces by massed, long-range Russian rocket artillery. And from a US Army perspective, the most frightening aspect of this devastation is this: we do not equip or train our artillery forces to reap this kind of destruction. After years of counterinsurgency campaigns and stability operations in which minimizing collateral damage was—importantly—our top priority, we now find ourselves wedded to the idea that precision fires that minimize risk of such collateral damage are the beginning and end of indirect support. This enduring belief will spell disaster in future conflict against near-peer enemies who can, and will, put more rounds and rockets downrange, in less time, and at greater range than we could ever hope to match, let alone surpass. Above all else, the Army must prioritize the acquisition, training, and responsiveness of artillery to deliver massed fires at long range to destroy the enemy long before the maneuver force is required to close the distance and finish the fight.

From a numerical standpoint, the US Army fields one rocket artillery brigade within each corps. This translates to roughly one rocket artillery system for every four tube systems within the active duty force. Recognizing the sheer power and superior range of these weapon systems, the Russian Army fielded three rocket systems for every four tubes in the Donbass. If this growing trend of Russian preference for rocket systems continues, the US Army could face a three-to-one numerical disadvantage in rocket systems in any given fight. The US Army must consider acquisition and employment of increased long-range rocket artillery systems when making decisions on how to grow the force. Gen. William T. Sherman famous quote—“A battery of field artillery is worth a thousand muskets”—is every more poignant given the devastation and range of today’s rocket artillery systems and munitions. In addition to increasing rocket artillery quantity and capabilities, the Army must boost funding for the development of desperately needed improved cannon artillery systems. The M109A7, currently in development as an upgrade to the A6 model, represents a limited improvement, maintaining the same firing range of twenty-two kilometers, a firing rate of one round per minute, and no ability to conduct multiple-round, simultaneous impact fire missions. Our Army has accepted this reduced range in our cannon systems due to the significant advantages we have historically maintained in our Air Force’s ability to strike deep, unimpeded, into enemy territory. This air supremacy is no longer a guarantee in the intricate web of deadly Anti-Access / Area Denial weapon systems that will target our aircraft and carrier fleets out to a range of several hundred kilometers. The United States should look to build cannon artillery that can meet or surpass the German-made PZH 2000, an impressive system that can range up to thirty kilometers (unassisted), fire at a sustained rate of ten rounds per minute, and blast a target with five rounds simultaneously for devastating effects.

While the Army is fielding new initiatives to increase the range of our cannon, rocket, and missile systems, our institutional bias towards a superior maneuver force supported by limited precision fires will limit the our ability to maximize the training and employment of these weapon systems on the modern battlefield. The United States must significantly improve the training of artillerymen to maximize their lethality on the battlefield. This must begin with an Army-wide acknowledgment of our cultural biases, lauding the exploits of infantrymen in the close fight above the roles of all other combat soldiers (and I make this argument as an infantryman). Our collective memory of battlefield glory revolves around images of Pickett’s charge at Gettysburg, Tom Hanks’s portrayal of an infantry officer plunging through the torrent of machine gun fire on Omaha Beach, and Dick Winters—leader of an infantry band of brothers—parachuting into France while German anti-aircraft batteries light up the skies with deadly fire all around him. In each of these cases, the preparatory artillery was either insufficient, inadequate, or non-existent, and thousands of infantrymen paid the price with their lives. The modern battlefield is becoming ever deadlier with an influx of highly advanced manned and unmanned combat platforms capable of targeting US forces at extended range. Choosing to employ a limited quantity of inferior artillery systems, and instead relying on the maneuver force to do the lion’s share of the hard work of combat at close range is a recipe for disaster. Instead, the US Army should focus on how tube and rocket artillery, integrated with the multi-domain, joint force, can mass the fires necessary to destroy the majority of enemy forces well before the infantry and armor close the distance to an enemy now incapable of direct-fire combat.

Finally, increasing the responsiveness of artillery will make the combined-arms force of the US Army much more lethal on the modern battlefield. Senior leaders must consider task organizing cannon artillery below the brigade level, allowing indirect fire assets to provide direct support to infantry and armor battalions to achieve maximum responsiveness. Rocket artillery should be made available to division and brigade commanders for truly effective fires. While battalions utilize their cannon artillery to support their maneuver forces, brigades can shape the fight with their own rocket artillery dozens of kilometers from the battlefield. Russia has already adopted this construct in the Donbass, where the dispersion of the battlefield, coupled with the need and opportunity for maximum destruction of enemy forces in the open, often necessitated this task organization.  This is not new concept in American combined arms. Armored cavalry regiments boasted this structure, with each maneuver battalion containing an artillery battery in direct support, making them among the most lethal units in the Army—until the last such regiment was disbanded in 2011. Responsiveness will also be markedly improved through increased training in using UAV assets at the tactical level to locate, target, and observe fires. Commanders must be able to train in permissive training environments, where they are encouraged to assume risk and fly these systems with minimal range restrictions and repercussions for damaged or lost systems.

The artillerymen of the US Army have served with tremendous valor from Bunker Hill to Baghdad and beyond. US artillery demonstrated exceptional firepower and precision in World War II, establishing the system of a forward observer, fire direction center, and batteries that could rapidly and accurately bring destruction on the enemy. As the battlefield becomes more deadly and more dispersed, the need for massed, well-trained, and responsive fires becomes ever more critical to victory. Boosting our artillery range, our ability to mass rounds on targets, and the responsiveness of our fires is an imperative if we wish to remain the pre-eminent army on the modern battlefield.