Bugs and Gas: Celebrating the Birth of the Army Chemical Corps 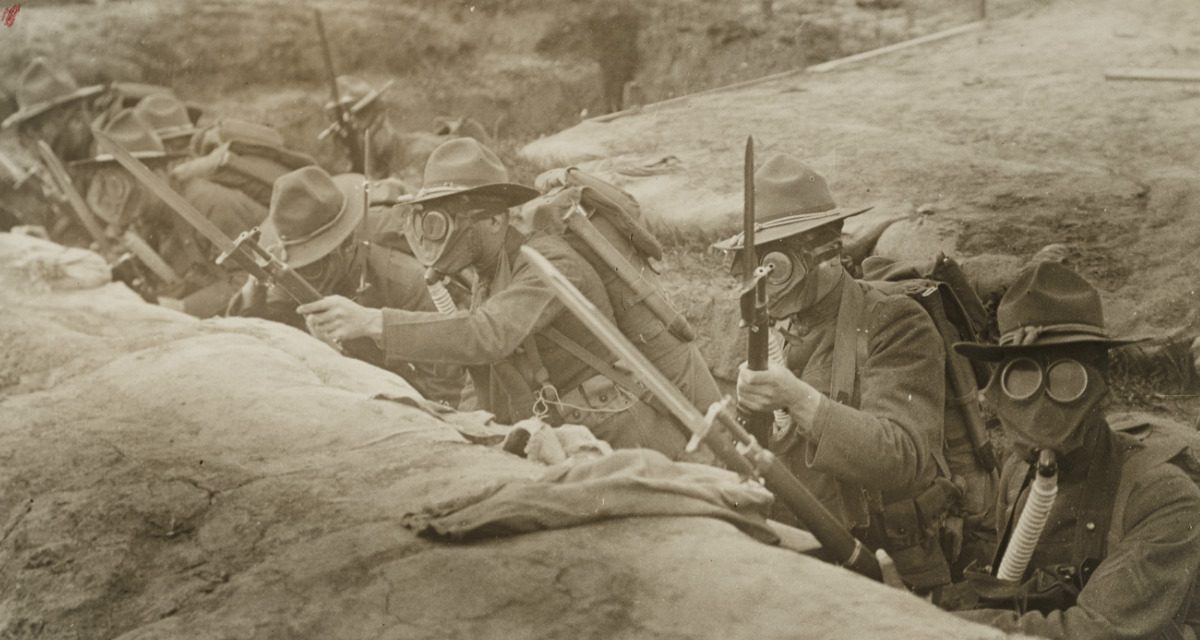 In December 1917, Maj. Earl J. Atkisson, regimental commander of the 30th Engineer Regiment (Gas and Flame) and two companies of men and equipment were on a slow boat to France. They were on their way to provide the American Expeditionary Forces (AEF) with an offensive chemical weapons capability, something the US military had never developed, or even explored, prior to February of that same year. Despite two years of chemical warfare on the European continent, the War Department was curiously uninterested in the topic. As US troops joined the fight, the wheels of bureaucracy slowly began to grind as civilian and military professionals realized that they needed to develop offensive and defensive capabilities for this new form of warfare.

Because of the lack of any protective equipment, American forces were utterly reliant upon British and French troops for protective masks and chemical munitions, as well as to develop basic individual and unit training. US industry supported a rapid acceleration of research into protective equipment and chemical munitions, along with the start of construction of a chemical shell–filling plant at a wheat field in Edgewood, Maryland, in November 1917. But none of the US-manufactured chemical-filled 75mm artillery rounds would reach Europe prior to the end of the conflict.

Earlier in the year, General Order 8 (published on July 5, 1917) had established a “Chief of Gas Service” position within the AEF General Headquarters. Lt. Col. Amos Fries, an engineer, was selected for the position and began creating an organization that would provide chemical specialists to divisions, regiments, and battalions. When Fries said that he didn’t know anything about gas weapons, Gen. John Pershing reportedly said, “That’s okay. Learn.” Trained at the AEF Gas Defense School in France by British officers, these officers and NCOs would inspect the defensive equipment (gas masks, gas-proof shelters, and alarm systems) and train the troops on anti-gas procedures. The AEF was not prepared for chemical warfare and suffered accordingly. By some accounts, about 30 percent of AEF wounded were treated for gas wounds. About two hundred AEF soldiers died from gas, out of the 34,250 killed in the Great War.

The 30th Engineer Regiment, which would be renamed as the 1st Gas Regiment in July 1918, received British four-inch Stokes mortars and Livens projectors on which to train. Eventually the regiment would be composed of six companies, delivering gas, thermite, and high-explosive shells against the German lines. The unit would participate in the Aisne-Marne, St. Mihel, and Meuse-Argonne operations. During the Meuse-Argonne offensive, the regiment’s companies shot more than six hundred gas shells and more than twenty-eight hundred smoke and thermite bombs.

In an effort to consolidate the development and execution of chemical warfare operations, the War Department issued General Order 62 on June 28, 1918, establishing a Chemical Warfare Service from the existing Army Gas Services and similar functions in the Ordnance Department and Medical Department. This order only provided for such an organization up to six months after the termination of hostilities. By the end of the war, there were 1,680 officers and 20,518 enlisted personnel in the service. Shortly after the war, Congress intervened through the National Defense Act to make a chemical service a permanent bureau of the Army, responsible for developing smoke, incendiary, and toxic gas weapons as well as defensive applications.

After the Great War

Pershing is famous for his quote, “Whether or not gas will be employed in future wars is a matter of conjecture, but the effect is so deadly to the unprepared that we can never afford to neglect the question.” That is not to say that he supported the continuation of the Chemical Warfare Service—in fact, he did not. He recognized the need for such a capability during the war, but in 1922, he stated that “chemical warfare should be abolished among nations, as abhorrent to civilization.” Many officers thought that if the War Department stayed out of chemical warfare, they could avoid future attacks. Congress did not share that sentiment. During discussions in Geneva about outlawing chemical weapons from future warfare that led to the 1925 Geneva Protocol, the official US government position was to not ratify the document, believing that it was not necessarily an immoral or particularly frightful form of warfare, and in fact might have potential in future conflicts.

Upon the US entry into World War II, the War Department and State Department were concerned that the Axis powers had invested into a chemical and biological weapons program, while the US military was once again unprepared for such a conflict. In early 1942, Gen. George Marshall ordered the activation of chemical battalions and development of toxic warfare gases. Once the United States formally joined the war, President Franklin Roosevelt announced the general policy of “no first use” regarding chemical and biological weapons, but the US Army significantly ramped up its forces and deployed tens of thousands of tons of phosgene and mustard munitions in overseas theaters as retaliatory capabilities. While chemical warfare did not come about, the US Chemical Warfare Service employed its mortar companies, field laboratories, and decontamination companies in every theater.

After the war, Congress reorganized the armed services under the National Security Act of 1947, and as part of that act, the Chemical Warfare Service became a Chemical Corps. Given the discovery of nerve agents developed by the German military, the Cold War would see the continued operation of chemical and biological weapons laboratories, proving grounds, and depots that had sprung up during World War II. Most of the focus was on preparing for the anticipated invasion of Western Europe by the Warsaw Pact, but Army chemical troops supported operations in the Korean conflict and the Vietnam conflict, although not with toxic chemical weapons. The use of herbicides and riot control agents in the latter conflict caused Donald Hornig, special assistant for science and technology to President Lyndon Johnson, to urge the president to clarify its “no first use” policy on chemical and biological weapons (he didn’t, based on advice from the Joint Chiefs).

Gen. Creighton Abrams, as chief of staff of the Army, decided to eliminate the Chemical Corps in 1972, as he was looking for ways to reduce the Army’s Vietnam-era infrastructure. Reduced to a special branch in the Ordnance Corps, the Chemical Corps was only saved because Congress had designated it by public law and because reviews of the Arab-Israeli conflict in 1973 showed that the Soviet Union was developing military systems that had chemical protective systems. There were 2,250 total soldiers in the Chemical Corps in 1975, and estimates of 80,000 chemical specialists in the Soviet Union’s military. This indicated to some that a European conflict might involve chemical and biological weapons, meaning that the US Army needed a technically competent force to be able to operate in such an environment. In 1976, the US Army Chemical Corps was re-established. Between 1979 and 1990, the Army added twenty-eight chemical companies to the active duty force, updated its chemical-biological defense doctrine, and began modernizing its defensive equipment, barely in time to address US readiness for the first Persian Gulf conflict.

As the Cold War spun down, so had readiness for operations in a chemically contaminated military combat environment. The US government formally stood down its chemical weapons modernization program, which had the incidental effect of reducing the Chemical Corps’ relative clout in the Army. US forces were ill-prepared for the possibility of Iraq using chemical weapons in 1991, and still had significant capability gaps in 2003. The defense leadership often discounted the chance of an adversary using chemical or biological weapons during peacetime due to the belief that ambiguous threats of retaliation, plus the presence of technical specialists in the Chemical Corps, would mitigate that threat—until the possibility of open combat with an adversary armed with unconventional weapons became real.

As nation-states have reduced or eliminated their capabilities to use unconventional weapons on the modern battlefield, the US National Security Strategy and defense strategies continue to warn of the threat of adversaries using weapons of mass destruction. North Korea continues to present the most immediate threat of a traditional large-scale use of chemical and biological weapons against US forces, but concerns about violent extremist organizations obtaining chemical, biological, or radiological hazards continue. Despite the lack of any evidence of such groups’ capability, significant resources have gone to developing a massive “CBRN Response Enterprise” in the event that state and local emergency responders are overwhelmed by such an attack. Likewise, while the threat of a violent extremist organization obtaining a nuclear device is near zero, there is no end of plans and forces prepared to respond if such an attempt is identified.

One hundred years after the Great War, it is popular to opine that the Islamic State and other terrorist groups using chlorine and crude mustard agent is a resurgence of chemical weapons not used since that time. This is folly. No one should compare the World War I battles, in which hundreds of chemical rounds and tons of agent were used in a single exchange, with the single rounds and limited chemical exposures that Islamic State has conducted to date. Even Syria’s current use of chemical weapons in its civil war pales in comparison to what was seen on the Western Front between 1916 and 1918. The concern over potential expansion of chemical weapons use by nation-states is commendable but overwrought by the failure to view unconventional weapons in the context of contemporary security studies. It is not the Cold War anymore and we need to appropriately prepare for the future joint operating environment.

It is possible that nation-states may return to developing and using chemical and biological weapons in the future. The technology certainly is available and the process of producing such weapons in small quantities can be done in any industrially advanced country. US military readiness for chemical or biological weapons use has never been where it needs to be immediately prior to hostilities, as a result of hubris and unwarranted confidence in our deterrent capabilities. Defense leaders must recognize that the rhetoric identified in top-level defense strategies needs to be mirrored by resources to develop capabilities to protect the general military force from being degraded by these weapons. A Chemical Corps that is increasingly diverted to homeland security missions (to include pandemic infectious disease response) and focused on niche specialty missions such as WMD interdiction and WMD elimination is not going to be ready to support military combat operations that involve unconventional weapons.

The Air Force and Navy have no equivalent to the Army’s Chemical Corps, having decided to place the responsibility to develop chemical-biological defense response largely within hazardous response/disaster response career fields. Marine Corps warrant officers support the policy and plans for chemical-biological response but rely on Army chemical units during large-scale military operations. Despite the development of counter-WMD strategies and concepts, the general priority of all services is on responding to chemical and biological incidents rather than addressing the larger scope of strategic deterrence, arms control and nonproliferation, and counterproliferation activities. Having US Special Operations Command assume some degree of advocacy over counter-WMD issues may or may not improve that dialogue. Until the national security enterprise gets serious about countering WMD, we will still need an Army Chemical Corps to maintain the discussion. 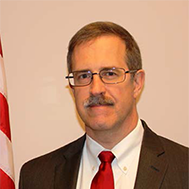 Al Mauroni is the Director of the US Air Force Center for Strategic Deterrence Studies and author of the book, Countering Weapons of Mass Destruction: Assessing the U.S. Government’s Policy.

The opinions, conclusions, and recommendations expressed or implied within are those of the author and do not necessarily reflect the views of the Air University, US Air Force, or Department of Defense.