China’s Bet on Assad: The Lucrative and Risky Business of Postwar Reconstruction 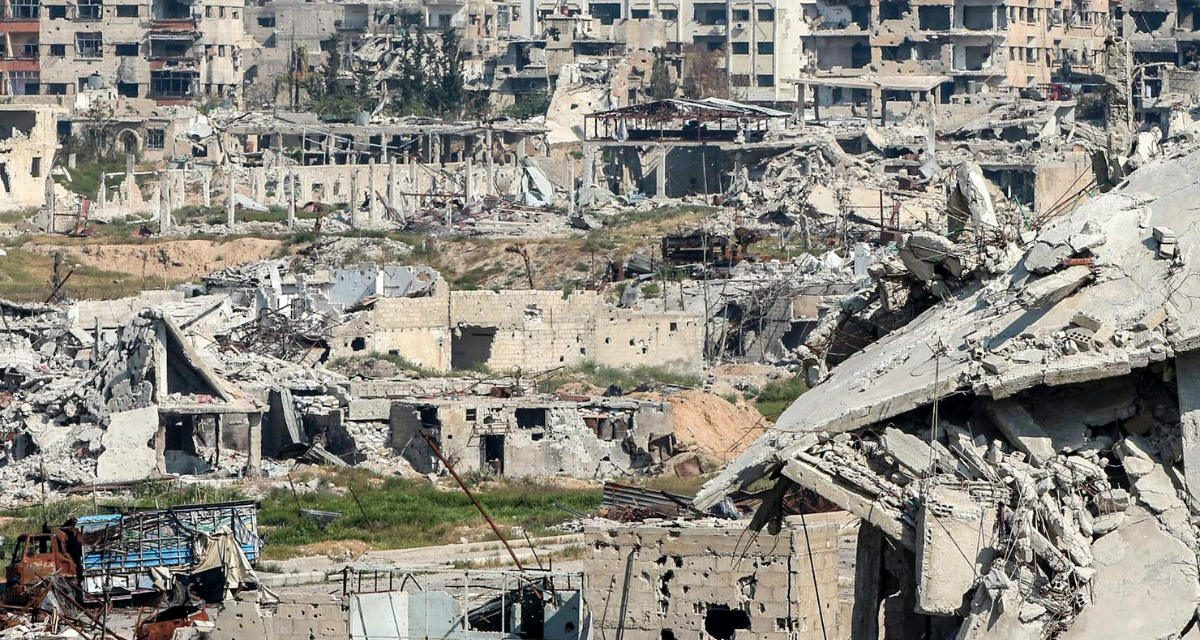 Of the foreign powers involved in the Syrian conflict over its nearly nine years, a new figure has emerged, one with formidable credibility and capital: China. The People’s Republic has taken an interest in the profits that can be earned from reconstructing the war-torn country. But will China decide it is worth it to become ensnared in Middle East politics or run afoul of American sanctions in order to get more deeply involved in Syria?

Since the beginning of the conflict in 2011, the Syrian Civil War has claimed almost half a million lives and injured many more. It has also cost $120 billion in material destruction to roads, homes, and other infrastructure, according to a report from the UN Economic and Social Commission for Western Asia.

The conflict is not over, but it is highly unlikely that the government of President Bashar al-Assad will abdicate power as analysts once predicted. While the regime reclaims territory, reconstruction is on the agenda as Assad tries to assure his remaining war-battered citizens that a return to the status quo is better than continued struggle. The trouble is Syria just does not have the funds to support its own reconstruction.

This creates a clear commercial opportunity for China, which is a leading proponent of development through infrastructure construction. Post-war reconstruction in Syria is a natural fit into China’s Belt and Road Initiative (BRI). Syria is a geostrategic crossroads for China’s BRI designs in the Middle East, a region with links to African, Central Asian, and European markets. Assad’s political and media advisor, Bouthaina Shaaban, said earlier this year that “the Silk Road is not a silk road if it does not pass through Syria, Iraq, and Iran.” The Chinese company Touchstone is already constructing a railroad from Jordan’s southern port in Aqaba to Syria in anticipation of a more active economy after the war.

China’s usual doctrine of political caution does not prevent it from building partnerships based on commercial benefit, which includes postwar reconstruction in Syria. The potential to profit from rebuilding in Syria is tremendous, assuming it can navigate the endemic corruption of the Assad regime. It certainly wouldn’t be the first time China made lucrative partnerships with corrupt governments. Syria needs cash without strings attached, and China is hedging its bet that Syria will in the long term be profitable.

In a conversation with the author, the Syrian ambassador to China, Imad Moustapha, said that of the Assad government’s traditional allies—which also include Russia, Iran, and India—China is by far the most qualified to take on the task. China’s relationship with Syria prior to the conflict was fraught, due in part to Syria’s close ties during the Cold War with the Soviet Union, China’s rival. China and Syria were not on each other’s radar. China was preoccupied by domestic developments, like the Cultural Revolution or later economic development, and the Assad regime was focused on its own reinforcement at home and entanglement in regional politics in Israel and Lebanon.

While the Assad government made stabs at connecting with China in the early 2000s, only in the past ten years have relations grown stronger. This is mostly because China chose Syria as a country where it can challenge the United States in the United Nations with little actual commitment. China could thwart the West and promote its non-interference rhetoric, while Syria could enjoy the largesse of a major world power in a time when it had few friends. Conveniently for China, Russia, with its more assertive Middle East policy, ends up taking most of the international criticism for partnering with the Assad government while China skates by unscathed.

Also conveniently, China’s other business partners in the Arab world that oppose the Assad regime haven’t been put off by China’s cozy relationship with the Assad government. As the Assad government’s removal seems more unlikely with each passing year, governments in the region that once condemned the regime are beginning to explore rapprochement with it.

With this shift, China’s business interests in Syria would increasingly not be out of place with China’s other Arab partners in the Middle East. This plays well into one of the pillars of China’s approach to the region: befriending all sides in a conflict. China, through an apolitical and commercial approach, maintains productive relations with Saudi Arabia and Iran, Israel and Palestine, and now Syria and its various opponents.

Reconstruction has already begun. The vice chairman of the China-Arab Exchange Association, Qin Yong, was an outspoken advocate for Chinese reconstruction in Assad’s Syria in a conversation with the author. He has led multiple business delegations to Syria to promote the work of Chinese companies in reconstruction. Even Vice President Wang Qishan has stated that China is ready to play a role in reconstruction during a recent meeting with a delegation of the Ba’ath Party.

On the Syrian side, Ambassador Moustapha has credited China as the only country that can rebuild Syria. He has added that Chinese companies will receive favored treatment from Damascus. In a discussion with the author, Moustapha claimed that the work of Chinese reconstruction is already underway. Chinese and Syrian companies are partnering, with signings of MOUs and permanent displays of Chinese products. In November, the Syrian Cham Wings Airlines, which had previously flown to Shanghai, began indirect flights to Shenzhen twice a week to accommodate increased traffic.

Syria is a piece in China’s larger BRI strategy, but China’s ambitions hit a snag when it comes to the Middle East. China’s engagement in the region is relatively restrained. This is due to China’s guiding philosophy in the region: The Middle East is a political tar pit, one that China is all too happy to watch its competitors become mired in. Any meaningful engagement carries the risk of entangling China in the region’s intractable politics and multiple conflicts, perhaps costing lives.

Chinese citizens coming home in body bags never plays well domestically. The deaths of two Chinese peacekeepers in South Sudan in 2016 and two Chinese missionaries in Pakistan in 2017 caused an uproar that officials have not forgotten. Reconstruction in Syria presents China with the same threat.

The other potential snag for China is the threat of US secondary sanctions. In a conversation with the author, an anonymous Western official stated that if China funded projects in Assad-controlled territory, the United States would notice. Under pressure from the United States, particularly in the larger context of the trade war, China would likely adjust its strategy toward Syria. China values its relationship with the United States far more than its ability to play world power in the Middle East. While Middle East policy is an indicator of global reach, China would not trade its ties to Western markets for what profits can be made in Syrian reconstruction.

Pressure from the United States halted Israeli arms sales to China in 1999 and 2005 and nuclear trade between China and Iran in the 1990s.  The US-China relationship is already troubled enough without piling on business in Syria, which is not a strategic priority. It has neither military bases or the legacy of a Cold War partnership like Russia has. Syria needs China far more than China needs Syria, if it does at all.

China is assiduously attempting to turn Syria into a win-win situation, as Chinese leaders love to say. But the pitfalls of reconstruction may test the bounds of their cautious, commercial approach.

Lucille Greer is a Schwarzman Fellow at the Wilson Center’s Kissinger Institute on China and the United States. Her research project examines China’s navigation of the Saudi-Iranian rivalry and the new geopolitics of the Middle East. She has lived and conducted research in China and the Arab world. Follow her on Twitter: @Lucille_Greer_.