Competition, Conflict, and Mental Models of War: What You Need to Know about Multi-Domain Battle 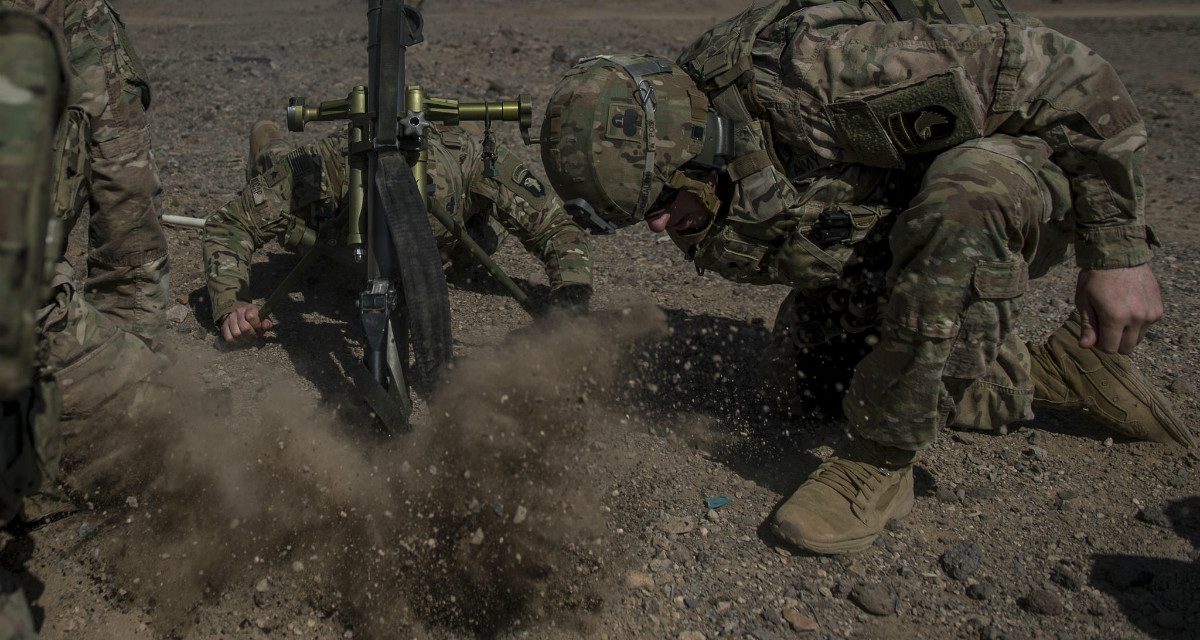 Editor’s note: This is the second article in a series that dives into the multiple ideas presented in the US Army’s Multi-Domain Battle Concept. You can also read the first article, “The Road to Multi-Domain Battle: An Origin Story.”

Multi-Domain Battle Concept Version 1.0 is an important work that requires close reading and reflection. When you apply context to the core components of the concept, it becomes clear that the concept addresses the complexities of the future operating environment with considerable depth. As the second article in this series, it is important to reinforce that my focus is keenly on the overarching concept of Multi-Domain Battle—the vision and core ideas that must guide the first and last cuts of what Multi-Domain Battle will mean for the future force.

For a concept to serve as a guiding vision it must be linked not only to today’s operational environment, but to a vision of tomorrow’s, as well. This is why the Multi-Domain Battle concept incorporates technological advancements and diffusion, leverages weaponized information, and addresses potential adversaries’ disruptive political aims designed to upend the post-World War II international order. The concept argues that these challenges demand a new perspective on how the US military fights both in purpose and design. To achieve this, Concept Version 1.0, Multi-Domain Battle: Evolution of Combined Arms for the 21st Century, examines three key ideas: (1) Competition and the Conflict Continuum; (2) Compression, Convergence, and Expansion of the Battlefield; and (3) the Future Force Components. Together, these big ideas give the foundation for discourse on the future of warfare for the US military. However, the latter two core ideas only become most meaningful after understanding the first—how Multi-Domain Battle has embraced and improved upon evolving ideas on competition and the conflict continuum—which is the focus of this article.

Multi-Domain Battle Concept Version 1.0 defines competition as the period in which “U.S. forces actively campaign to advance or defend national interests without the large-scale violence that characterizes armed conflict. . . . The current and future operating environments require a holistic approach to campaigning that links activities short of armed conflict with the execution of armed conflict.” In short, the concept looks at competition as a period outside of open conflict; it is a contest over national interests with an adversary that exists short of conflict. To compete (and prevail), you must directly link your capability of waging all-out war with what you do in competition. As the concept states, this is not a new idea. Others might observe that it’s no different than what we do today. But while we say that our activities—from shaping to dominating to enabling—are connected, in practice, they too often are not. We must evolve the models we use to plan and execute operations if we want to remain competitive in the twenty-first century. 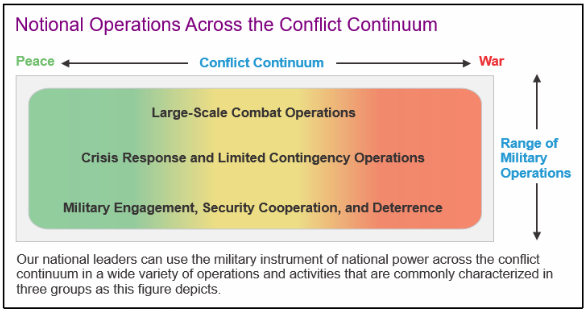 The “notional operations across the conflict continuum” graphic that appears in Joint Publication 3-0, Joint Operations, demonstrates a classic, yet limited, representation of how we should view military activities from peace to war in a relational causal pattern—two variables working in relation to each other to generate an outcome. In this case, it is the correlation between the ideas of war and peace that determines the level and type of military operations that are required. Defining the causal pattern is important. Causal patterns are useful as a description because they articulate patterns that, on the surface, appear universal. There are different types of causal patterns—relational, domino, cyclic, and mutual, for example. How you define causal patterns—in this case, relational—determines how you define problems and develop solutions. 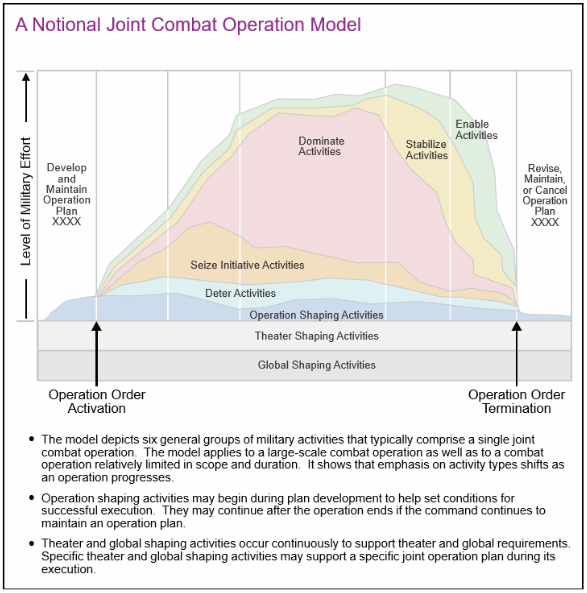 Enter the “notional joint combat operation model,” or as it has been more widely known, the six-phase planning construct. Paul Scharre and Lauren Fish have expertly detailed the problem with, limitations of, and history behind the six-phase construct in a 2016 article series. In short, as Chairman of the Joint Chiefs Gen. Joseph Dunford has highlighted, “our traditional approach is either we’re at peace or at conflict,” but that framework for how we describe and plan for military operations is ill suited for the gray zone challenges of today. Furthermore, a purely linear phasing construct does not account for the dynamic challenges that can emerge after the big fight is over or how to “off ramp” to prevent escalation. Finally, while the phasing construct in question has been in place since 2006, it was born out of the post-Cold War environment of the 1990s and “intended for a conventional campaign . . . [with] little need for messy state-building after the conflict or extended competition beforehand.”

At this point, I can practically hear graduates of the Army’s School of Advanced Military Studies screaming: “The phasing construct never specified time horizons or resource requirements, and never even said it was the answer!”  As David Maxwell expertly lays out, planners are not constrained to a specific planning model. Going a step further, joint doctrine has also made invaluable steps in Joint Publication 5-0 by removing the notional phasing construct all together. However, from senior leader mandates to the fact that the phasing model and continuum are deceptively easy to understand and describe between commanders, planners, and policymakers, it has become an inescapable yet flawed mental model.

Prevailing: It’s All in How You Think

According to Peter Senge, the man who wrote the book on creating learning organizations, all successful learning organizations excel in five disciplines: personal mastery, mental models, shared vision, team learning, and systems thinking. Arguably, the US Army is pretty good at most of these, with the exception of adapting and improving our mental models (and systems thinking, but that’s for another discussion). Senge defines mental models as “deeply ingrained assumptions, generalizations, or even pictures or images that influence how we understand the world and how we take action.” We all have mental models that are ingrained in us through life’s experiences and education.

The conflict continuum and phasing constructs are idealistic mental models for commanders, planners, and policymakers. They are not founded on the known patterns of armed conflict and competition and what is truly required to prevail.* As mental models, they give planners a way to phase the military ramp up (and down) in a major conflict—ramp up to fight and then ramp down to go home. They provide a way of framing resource management discussions at the strategic level. To that end, the phasing model works, but only if we live in a perfect world in which geopolitics can be cleanly plotted along an axis of war and peace. Unfortunately, we don’t.

Mental models are not solutions, but the right mental model enables you to discover the best possible solution. Mental models, like the conflict continuum and phasing construct, help define and organize problems and create solutions. However, when things are no longer working and an organization begins to fail, one of the potential causes is an out-of-date mental model inhibiting progress. Taking into account Crimea, South China Sea, Syria, Georgia, over fifteen years in Afghanistan, and our inability to leave a stable Iraq—our current mental models guiding policymakers, commanders, and planners are inadequate. What we need are revised models that give us the ability to stay competitive in a constantly changing environment.

The core idea I have come to appreciate, in terms of competition in Multi-Domain Battle, is that to effectively compete and win, both today and in the future, we must evolve our understanding of the conflict continuum. The causal pattern for the conflict continuum is not relational, but cyclic. Actions, whether military, diplomatic, economic, or information, impact one another sequentially and simultaneously with no clear beginning or ending. As one action impacts the other the environment changes. To remain competitive, your actions and reactions must seek to control the operational tempo of the cycle.

Gen. David Perkins, the commander of the US Army’s Training and Doctrine Command, describes this revised perspective on the conflict continuum in a recent Military Review article, in which he broadens the aperture of competition to a strategic perspective:

There is and always will be strategic competition. You are either winning or losing, present tense. Seldom will conflict result in a permanent win or loss. The linear depiction of peace to war and back again must be revised to reflect the cyclical nature of war where there are only positions of relative advantage. The continuum of conflict is defined by competition short of conflict, conflict itself, and the return to competition (see figure). 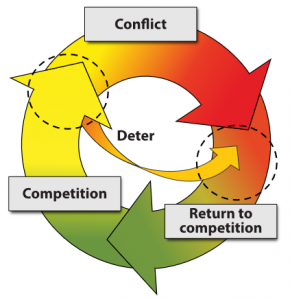 This analytical thread can be traced a step further to an important conclusion: There is no such thing as peace. There is only competition and conflict. When you settle for peace, you lose sight of how the world is evolving and immediately place yourself at a disadvantage.

Regardless of whether or not peace is attainable, a change in how we understand and perceive the conflict continuum requires a change in how we model military operations. This gets back to my previous point on the legacy mental models of the conflict continuum and phasing constructs: they are both flawed and inescapable. Even if we just remove them from doctrine, as is the case with JP 5-0, it is not enough. We must replace them with a more accurate and effective mental model.

Policy discussions and decisions, coupled with their direct impacts, must flow from an understanding of constant competition. The abstract ideals of peace, detached from reality, must be set aside, when it comes to policy. The way forward, I personally believe, lies in the manner in which Gen. Perkins describes the three periods of competition, conflict, and return to competition. This is an invaluable point of reference for a new mental model. In many ways, these three periods could form the notional strategic phases that could shape policy discussions towards more effective discourse. It is no longer a question of war and peace, but how we win in competition.

While this all may sound like semantics, it isn’t. Our planning and operations doctrine, until recently, has focused almost exclusively on an inevitable road to war. A new mental model, focused on the problem of competition confined by specifying time and space, provides an option outside of systematic ramp up of troops and equipment—or broad hand waves in reference to shaping operations. Theater Campaign Plans can no longer be about steady-state shaping operations—they should be about winning in the competition period. Contingency plans should no longer be about setting the theater, but applying the ground work to effectively deter armed conflict, and if necessary, defeat adversaries if and when conflict arises. The ideas behind competition provide a mental model that allows us to frame problems and arrive at solutions to the challenges we face today and will for the foreseeable future. It is a mental model to help today’s commanders, planners, and policymakers to meet these challenges.

*The author would like to thank Col. Scott Kendrick. A number of parts of this article were directly informed by his detailed discussions, references, edits, and mentorship. 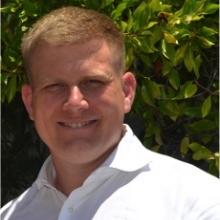 Kelly McCoy is a US Army strategist officer, Director of the Defense Entrepreneurs Forum Advisory Cloud, and a member of the Military Leadership Circle. A blessed husband and proud father, when he has time he is either brewing beer or maintaining his blog, Drink Beer; Kill War. The views expressed in this article belong to the author alone and do not represent the Department of Defense. If you have suggestions or questions for future posts, let me know!