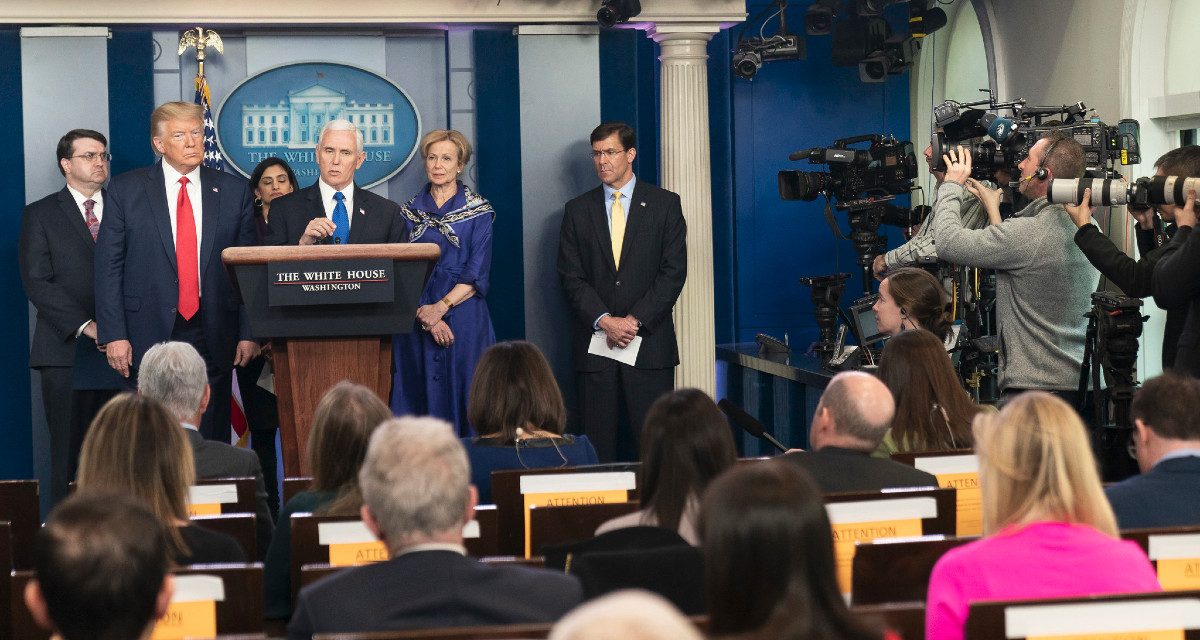 A few days ago, Kurt Campbell and Rush Doshi wrote that China is taking advantage of the COVID-19 pandemic by maneuvering for international leadership as the US government is collectively struggling to develop a cohesive strategy to respond to the global crisis. While that struggle has had many facets, among them is public communications that has been haphazard, to say the least. This raises the question of how the government should be coordinating messaging in the first place, especially as it becomes clearer that there is a growing element of great-power competition mixed into the crisis.

In a recent article in Defense One, Patrick Tucker described calls for elevating the assistant secretary of defense position responsible for influence operations to the level of under secretary. Indeed, he identified multiple issues across the Department of Defense that may preclude the organization from being an agile contestant against Russia and China in the modern information environment. Aligning influence operations at a higher level in the DoD hierarchy, he argues, would enable the Pentagon to be more responsive to messaging opportunities and facilitate coordination of effective countermeasures to Chinese and Russian competition. However, this solution does not answer the foremost critical question:

What should be the message?

Tucker reports that senior defense officials missed a potential messaging opportunity to compete with China during the protests in Hong Kong in 2019—that the unwieldy bureaucratic process and interagency consensus building failed to develop a timely, cohesive, and effective message that would counter China’s authoritarian posture against human rights and democratic values.

The same has happened for COVID-19. As the US administration is absorbed in the growing domestic crisis, it is at the expense of coordination and communication with our international allies and partners, in stark contrast to China’s “robust diplomatic campaign.”

The crux of the problem is not just that bureaucracy has left the US government unable to effectively compete with Russia and China in the information environment; it’s the fact that there is no cohesive narrative and strategy with presidential buy-in to guide the various efforts and agencies involved.

Collectively, senior leaders had trouble developing and agreeing upon a cohesive message to contest authoritarian rule in the modern era and the messages of senior officials have even directly contradicted one another. This is a major problem, and one that even having an under secretary of defense to adjudicate and approve a message would do little to solve.

From an administrative perspective, the US government should of course develop the right structure to prevent contradicting messages in the public forum and allow it to effectively compete against foreign propaganda. However, the structure may already exist.

While great-power competition, as a framework for understanding US foreign relations, has been advocated most strongly by the Department of Defense, the responsibility for public diplomacy sits with the Department of State. Since the US Information Agency was disbanded, the Department of State assumed the responsibility of communicating US foreign policy to domestic and foreign audiences. The under secretary for public diplomacy and public affairs is precisely to whom the interagency should look for leadership on such messaging opportunities and a communications strategy.

That position is currently without a confirmed appointment—as it often has been since its creation in 1999—which is a problem in itself. Moreover, the State Department’s Global Engagement Center—the office, which reports to the under secretary, with the mission to “direct, lead, synchronize, integrate, and coordinate efforts of the Federal Government to recognize, understand, expose, and counter foreign state and non-state propaganda and disinformation efforts” (emphasis added)—has not produced a comprehensive communications strategy, or even a message, against state actors since its founding in 2016.

With an effective strategy in place, the US government would not need to start from scratch to determine what the message should be at every juncture. This would also set the foundation for proactive engagement and communication, rather than just opportunism.  Organizations and positions already exist to develop this strategy, so new offices are not required; instead, existing ones should be properly resourced, supported, and held accountable.

Following the Cuban Missile Crisis, Secretary of Defense Robert McNamara said, “There is no longer any such thing as strategy, only crisis management.” This assertion, Stephen Sestanovich of Columbia University has written, suggested that the United States “was so strong that it didn’t have to have clear and consistent doctrines. Improvisational fine-tuning would do.” However, as Sestanovich went on to point out, this concept fell flat during Vietnam. Our contemporary experiences in Iraq and Afghanistan are similarly sobering and suggest that attempting to exploit foreign-policy opportunities and crises in such an ad hoc fashion is not the right answer.

China has seized the coronavirus crisis as an opportunity to discredit the United States as an international leader. In great-power competition, if we are to defend the concept of liberal democracy against authoritarianism, we must do so smartly. For example, the US government could focus the narrative on the successes of the policies implemented by South Korea, Japan, and Taiwan—key allies that share democratic values—for controlling their own outbreaks of COVID-19 with considerably less force than authoritarian China.

There is no reason that the US government cannot properly communicate—whether in the midst of a crisis or in the broader context of competition. But it starts from the top and takes deliberate strategy. We can, and must, do better.

Wonny Kim is a graduate student at Columbia University’s School of International and Public Affairs and a major in the US Army Reserve who has served as an information operations officer in Europe and Africa. The views expressed are those of the author and do not reflect the official position of the United States Military Academy, Department of the Army, or Department of Defense.