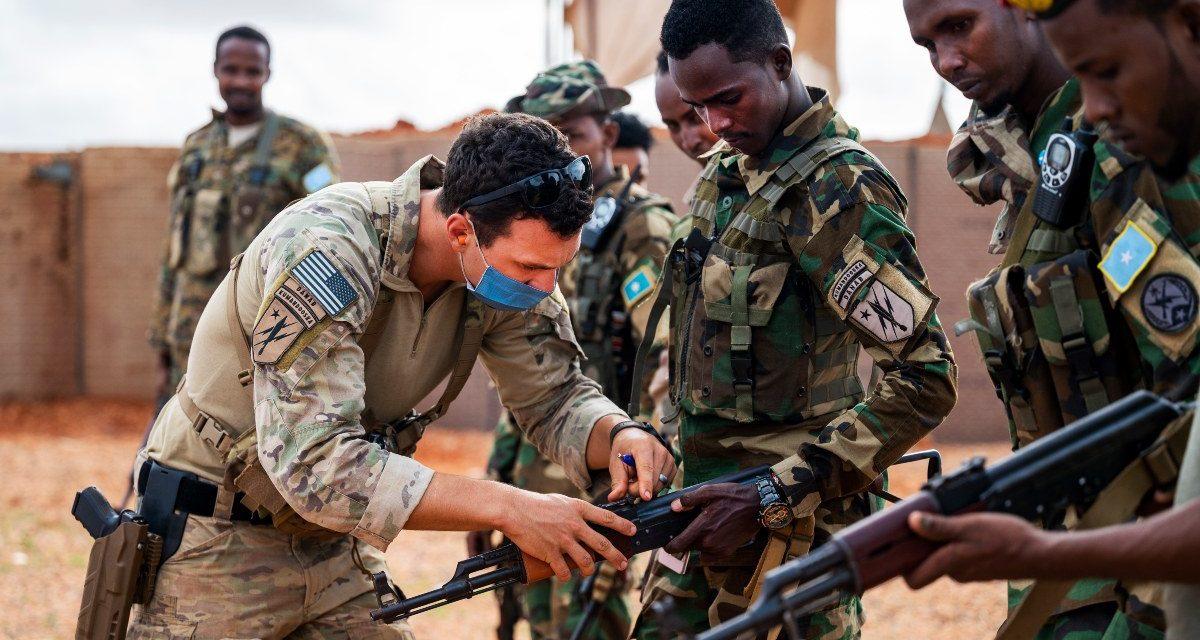 In the early weeks of Russia’s invasion of Ukraine, a forty-mile-long Russian military convoy set out toward Kyiv from the north. But the convoy soon ground to a halt—in large part because of the efforts of Ukrainian special operations forces. Under cover of darkness, thirty special operators, accompanied by surveillance and strike drones, ambushed the convoy from its front and two sides, disabling the lead vehicles and stopping it in its tracks. They remained there for two more nights, destroying more vehicles and crippling the convoy. Strikes like this one have given Ukrainian special operations forces a noticeable role in reversing the Russian advance. Indeed, Ukrainian SOF were one of the main beneficiaries of US security force assistance (SFA) to Ukraine over the past several years—an instance of the United States’ robust ability to train partner special forces.

Ukrainian SOF are only one example of this trend. For instance, as Abdi Yusuf and the author of this article detail in a new study, the United States created and trained the Somali Danab Advanced Infantry Brigade that now conducts most offensive operations against the al-Qaeda-linked terrorist group al-Shabaab. Similar cases exist in the Iraqi Counter Terrorism Service (CTS), Afghan commandos, and Colombian special operations forces, among others. The United States’ success in creating “small, hard forces” stands in contrast to its lackluster record building indigenous conventional formations in parallel to these elite units—namely the Iraqi, Afghan, and Somali regular armies.

In Iraq, Somalia, and Afghanistan, regular forces were incapable, broke en masse, or disintegrated altogether in critical moments while the special operations forces held their ground and sometimes reversed enemy advances. In Iraq, when the Islamic State swept through the northern part of the country from 2013 to 2014, four of the Iraqi army’s fourteen divisions collapsed virtually without a fight. Meanwhile, the CTS stood firm, fought, and in some instances repelled Islamic State attacks before acting as the primary force in the US-backed counteroffensive to liberate Islamic State–occupied territories. After the US withdrawal from Afghanistan in August 2021, regular army units disintegrated, leaving only the commandos—who had long filled in for an ineffective regular army—to fight against the Taliban. In Somalia, the regular army is so dysfunctional that African Union forces need to hold the country’s major cities while Danab conducts the hard offensive ground fighting against al-Shabaab.

These cases demonstrate the success of SFA in establishing reliable and effective partner special operations forces. This success, however, required sustained, hands-on efforts—the type of commitment that would not be possible with remote solutions such as the over-the-horizon approach promoted by the administration of President Joe Biden. As US policymakers rethink strategies for countering terrorist organizations and other irregular threats, they should consider the unique utility of foreign special operations forces that the United States itself creates. In particular, three key factors behind these forces’ resilience and efficacy are attributable to SFA and only possible with on-the-ground presence: cultivation of professionalism, insulation from political misuse, and strong relationships with US advisors.

First, partner special operations forces’ motivation to fight derived from deliberate US efforts to maintain professionalism and mitigate the structural weaknesses that often hobbled regular formations. The key to imbuing partner special operations forces with this level of professionalism was the level of control the US military exerted over their creation and management. The US military founded these units, which existed in strict separation from conventional army units, and US special operations forces personnel, rather than local officers, usually trained them. They enjoyed close relations with US advisors, who lived near their advisees and provided intelligence, logistical, and operational support—including crucial air and fire support. The US military also often provided salaries for partner forces and facilitated professional development, thus avoiding absenteeism and morale issues associated with mismanagement and corruption. This allowed them to develop their own esprit de corps, absorb the professionalism that is a hallmark of US military tradition, and develop strong officer-soldier relations that translated to sustained determination and aggression in battle.

At the same time, US advisors mitigated factors that often threatened this situation in local regular forces. In Somalia, army brigades were organized along clan lines, with officers using their official mandates to serve clan interests. As a result, army clan brigades mostly did not follow any central direction and could not fight outside their localities. US advisors therefore deliberately recruited members of Danab from multiple clans, with officers often commanding troops from various other clans. The same concept drove US SOF advisors in the creation of the CTS as a nonsectarian fighting force in Iraq.

The second key component of SFA was to insulate partner forces from political misuse. In Afghanistan, Iraq, and Somalia, rampant corruption, clientelism, and cronyism led to deep dysfunction in the armed forces that left the regular armies brittle or hollowed out.

In Somalia, for example, clan politics ruled the army, and politicians would regularly use forces loyal to them or their clans to undermine opponents. US advisors circumvented this problem by creating separate command-and-control systems for partner special operations forces. For instance, every operation Danab planned, at least while US forces were present in Somalia, was subject to US veto, which advisors did not hesitate to exercise if a given mission appeared too political. For example, in early 2020, President Mohamed Abdullahi Mohamed sent Danab personnel to oppose local militiamen in the Gedo region, but the United States blocked their use for this partisan purpose. After US forces departed Somalia and Mogadishu assumed more control over Danab, the government used part of the unit in an operation to take the town of Guriel from a formerly allied local militia. This move prompted the United States to review its support for Danab, demonstrating the importance of having US forces present on the ground to preserve the integrity of partner special operations forces.

The Somali case provides an analogue to the Turkish-trained Gorgor SOF unit, which had similar training and capabilities to Danab but lacked the insulated command-and-control structure. This opened the door for political misuse, such as the February 19, 2021 deployment of Gorgor members to disperse opposition demonstrators at Daljirka Dahsoon square in Mogadishu.

Relations with US Forces

Finally, partner special operations forces developed great respect for their US advisors that evolved into an interdependent relationship when conflicts with shared adversaries intensified. This enabled troops to adapt quickly as new challenges arose.

In Iraq, for example, the interplay between US advisors and the CTS facilitated the latter’s adaptation to a campaign of conventional warfare against an innovative adversary. At different points in the war, the CTS learned how to integrate close air support into its operations, fight in urban environments, and employ combat engineering to breach minefields. Perhaps most importantly, the US recommitment of its SOF units to Iraq to assist the Iraqi military in mid-2014 significantly boosted CTS morale. As then-commander of Special Operations Command Central Michael K. Nagata told me, “The celebration in the Iraqi CTS headquarters was something to behold. What that did was it gave the CTS a level of confidence in fighting ISIS that the Iraqi Army was never able to achieve.” The United States, in turn, relied primarily on the CTS to conduct the ground war in Iraq. In sum, the close relations US advisors developed with partner special operations forces set the groundwork for quick adaptation when it was most needed.

Lessons for US Policymakers

The United States has achieved tangible policy gains by building partner special operations forces proficient in aggressive light infantry tactics. The CTS deprived the Islamic State of territory in Iraq, the Afghan commandos spearheaded operations against the Taliban, and Danab was the only Somali military unit capable of taking the fight to al-Shabaab. These accomplishments were possible due to sustained investment and long-term commitment of personnel on the ground to foster and operationally support the partner forces. This hands-on approach is necessary to garner the trust, professionalism, and adaptability needed to fight determined foes like jihadist groups. The over-the-horizon approach promoted by the Biden administration—in which the United States conducts air operations remotely with no boots on the ground—will simply not suffice in the long term, and may even prove counterproductive.

At the same time, the United States has faced great difficulty creating strong conventional forces because it could not achieve this close relationship with partner regular forces. More often, US advisors to conventional forces strove to work within cultural and political constraints. In the early half of the Iraq War (2003–2007), for example, US trainers acquiesced to, or practiced, promotion based on sectarian considerations in the Iraqi army. As Rachel Tecott has observed, this “rapport-based” approach to “coax and cajole” partner forces cannot succeed without the application of carrots and sticks. The US Army’s conventional forces have also long viewed SFA as a secondary activity, whereas SOF members see it as a core competency. As a result, the US Army has faced difficulties finding the right people for the job. The US concept of dedicated SFA conventional units in the security force assistance brigades remains important, but trainers must be aware of and correct these issues.

This is not to say that US-created special operations forces are the only effective partner forces. US-backed conventional armies have, in some cases, performed well. During the war with the Islamic State, the Iraqi army served as a generally effective flank-security element, rearguard, and holding force, and it sometimes contributed positively to offensive actions, such as the Iraqi 9th Division’s securing of the outskirts of western Mosul in 2017. The United States has also established fruitful military relationships with local irregular forces, including the Iraqi Kurdish Peshmerga, the predominantly Syrian Kurdish Syrian Democratic Forces, and Iraqi Anbar Awakening militias. Yet ultimately, the most consistently reliable and effective US partners have been the special operations forces that the United States itself created, affirming the importance of long-term, hands-on commitments to the success of SFA.

Ido Levy is an associate fellow at The Washington Institute for Near East Policy focusing on counterterrorism and military operations, particularly relating to jihadist groups. He is the coauthor of a recent study on the Danab Brigade and is the author of the recently published book, Soldiers of End-Times: Assessing the Military Effectiveness of the Islamic State. You can find him on Twitter @IdoLevy5.