From Kabul to Kyiv: Strengthening Deterrence Amid Questions About American Resolve 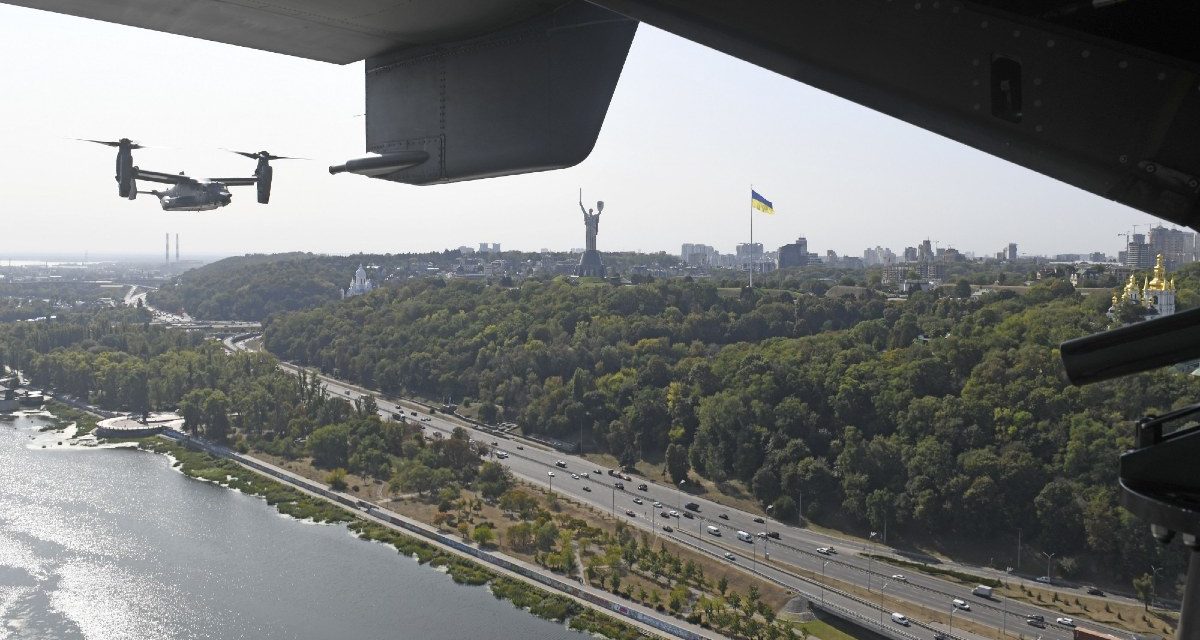 Deterrence smells like tank exhaust and feels like an earthquake. Hundreds of armored vehicles rumbled over streets, thousands of troops marched in formation, and dozens of planes flew overhead as Ukrainians cheered during their Independence Day parade on August 24. Kyiv’s main boulevard—Khreshchatyk—filled to the Maidan as the city bathed in blue and yellow. Ukrainians celebrated thirty years since their overwhelming vote to leave the Soviet Union to form a separate country.

While the world watched Kabul, another consequential geopolitical story was unfolding in Kyiv. The Afghanistan War’s tragic end is being judged in capitals around the world, as well as the Oval Office. The September 1 meeting between US president Joseph R. Biden and Ukrainian president Volodymyr Zelensky was high stakes for both countries’ security.

In Ukraine, even Independence Day came with casualties—one killed and two wounded in attacks in the country’s east. A half day’s train ride away, the 250-mile-long front line is frozen in trench warfare on what Ukrainian troops call the “zero line” (or “zero” for short).

In February 2014, after months of protests in Kyiv, pro-Russian former Ukrainian president Viktor Yanukovych fled the country. Within months, Russia annexed Crimea. Russia then encouraged and supported separatists to seize a significant part of eastern Ukraine (known as the Donbas). At one point Ukraine lost as much as one-fifth of its total population and one-seventh its territory. In June 2014, Ukrainian conventional troops alongside volunteer militias fought back and overran Russian-backed separatists. Then the Russian regular military stepped in to stop the counterattack.

Russia’s proxies have held onto all Crimea and much of the Donbas since then, about 7 percent of Ukraine. Like Afghanistan, where a much larger eastern neighbor (Pakistan) has used proxies to destabilize the country and exert its influence, Russian support to these separatists will continue for some time. It is the first forceful change of a European border since World War II. The war has killed over thirteen thousand people and displaced over a million and a half Ukrainians.

Moscow is using Kabul’s fall as pretext to pump doubt into Kyiv. In a recent interview, Nikolai Patrushev, secretary of Russia’s Security Council, said Ukraine “is headed toward collapse, and the White House at a certain moment won’t even remember about its supporters in Kyiv.” Andrey Kortunov, director general of the Russian International Affairs Council, said on CNN in late August, “I think politicians in Kyiv should be concerned about the credibility of the US security assistance to this country, because if the United States decided to let down one of its strategic allies in one part of the world, why wouldn’t they do the same in another part of the world?”

Any doubt in Kyiv as the evacuation from Afghanistan was unfolding wasn’t about American resolve. I was part of a small team of researchers in Ukraine at the time from the Homeland Defense Institute—a new organization at the US Air Force Academy, sponsored by NORAD/USNORTHCOM—and the Modern War Institute at West Point. Our conversations instead elicited frank expressions of Ukraine’s will to stand and fight. “We’re not Afghanistan,” one Ukrainian general told us last week. “We’ll fight the Russians to the death, until the last Ukrainian.” His son, a junior military officer, was recently wounded. Mine shrapnel struck his head—shrapnel, the general pointed out, that was stopped by an American-made helmet.

Ukrainian defenders often wear unit patches that read, “Ukraine or Death.” Courage is expected in uniformed combat forces. Nataliia Kalmykova is deputy operations director of Come Back Alive, a nonprofit that helped fund the Ukrainian resistance. We talked about what Afghanistan means to Ukraine. She told us directly that a similar breakdown couldn’t happen here. “A lot of people are caring about Ukraine, and keeping Russia out.”

In one especially important way, Russian meddling has backfired. Ukrainian polling shows Putin’s actions have hardened Ukraine’s resistance to Russia. “Putin was surprised to see so many Ukrainians fighting for Ukraine,” Professor Sergii Glebov told us, especially “Russian-speaking Ukrainians.” Ashot Topchian of the Ukrainian Strategic Initiative put it succinctly: “We have to say ‘thank you’ to Putin for one thing—our solidarity.”

Setting specific support aside in the Zelensky-Biden meeting, going forward, greater engagement would benefit the United States. For at least seven years, Ukraine’s stood up to an eastern onslaught. Russia’s weaponized the church, history, corruption, and even language. Moscow is clearly aware that when a bullet won’t work, you should send a story (that disrupts society). It’s a form of public warfare that targets all society, all at once, on all fronts. A Ukrainian think tank has characterized this war as hybression (hybrid aggression), “a package of diverse actions, adjustable in terms of intensity and hybrid in nature, against the adversary,” in which “military instruments are not dominant, and their application is thoroughly disguised and vigorously denied, while the very act of aggression generates uncertainties that hinder its identification.” The United States can see war’s future from Ukraine.

“Skate to where the puck is going, not where it has been,” goes the hockey advice the United States must mind as it looks to Kyiv. At Ukraine’s Independence Day, the US contingent included the energy secretary, an Air Force band, and American-provided Javelin antitank missiles. The US troops marching drew some of the Ukrainian crowd’s loudest applause. The T-84 tanks, the Turkish-made Bayraktar TB2 drones, and the giant Antonov An-225 flying overhead all play a role in signaling resolve to Ukraine’s Russian adversary. But US support may be the only deterrent sound that gets through to Russian ears.