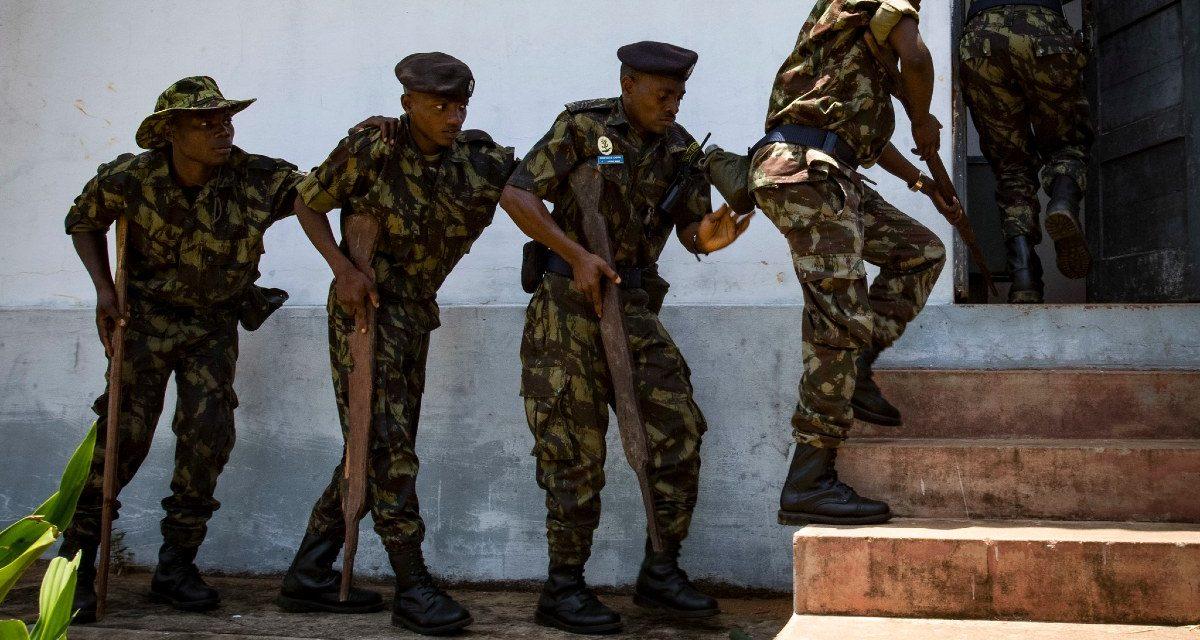 In March 2021, roughly a dozen US Army Green Berets arrived in Mozambique to help train the Mozambican armed forces. In October, the USS Hershel “Woody” Williams made a port call to the capital described by the US ambassador to Mozambique as indicative of the “strength of the strategic partnership” with the United States. This increased security cooperation, which has made the United States the largest bilateral donor to Mozambique, comes as the southeast African nation attempts to contain a surging Islamic State affiliate.

Over the past five years, the Islamic State of Iraq and Syria–Mozambique (ISIS-M), locally referred to as al-Shabaab (no direct connection to the Somali-based group), has organized an insurgency by leveraging economic grievances in a resource-rich, poverty-stricken region of the country. The insurgency finances its operations through illicit resource trafficking and recruits fighters with the promise of small loans to young men without opportunity. Today, the insurgency terrorizes the region of Cabo Delgado, in northern Mozambique, with tactics similar to Boko Haram’s razing of villages to capture sex slaves and youth fighters.

The conflict has displaced over half a million people since 2017. The violence inflicted on the region’s people only tells part of the story. This localized insurgency, which drove the Russian Wagner Group out of the region in 2019 and caused energy giants Total of France and Saipem of Italy to cease liquified natural gas extraction projects last spring, also demonstrates the power of insurgents to influence global investment in developing markets. In the wake of Russia’s invasion of Ukraine, Germany’s halting of the certification of the Nord Stream 2 pipeline, and Russia’s threats to shut off gas supplies to Europe, the demand for natural gas across the global north has increased while Mozambique’s supply remains cut off from the world market.

Today, the Mozambican armed forces, with the aid of a multinational regional coalition, are still fighting to regain control of the region. As the United States gets increasingly involved, it needs to understand the root causes of the conflict. The United States should specify its national interests and integrate diplomatic pressure with security assistance to not only quell the insurgency but push the government away from the abusive tactics and corruption that fueled it in the first place. The United States should also pay close attention: the situation in Cabo Delgado may foreshadow future conflicts in resource-rich regions of littoral Africa where foreign competitors jockey for influence.

The insurgency in Cabo Delgado has emerged after years of corruption, human rights violations, and population displacement. Cabo Delgado is a northeastern region of Mozambique bordered by Tanzania to the north and the Indian Ocean to the east. It is one of Mozambique’s poorest provinces despite rich reserves of natural resources. As the birthplace of the country’s independence movement in 1979, the region was ripe for armed resistance against a corrupt central government.

The 2010 discovery of large offshore natural gas reserves in the Rovuma Basin led the government of Mozambique to draft optimistic plans for domestic economic development. But instead of investing in the national economy, revenues were diverted to a small group of government officials. Despite ongoing investigations into grand corruption, foreign energy extraction began in 2017, led by France’s Total, US-based ExxonMobil, Italy’s ENI, and the China National Petroleum Corporation.

Widespread social discontent resulted in violent attacks against government and Western-affiliated targets such as banks, hotels, and a port. In 2018, the insurgency opportunistically rebranded itself as ISIS-M; it has since succeeded in cutting the world off from the African continent’s third largest natural gas reserves, located off of the Cabo Delgado coast.

Insurgency in Mozambique: A Local Stage with Global Actors

In 2019, Mozambique invited into the country members of the Wagner Group, the Kremlin-linked private military company, who quickly withdrew from a train-and-support mission after significant losses. Following its retreat, the government turned to the South African Dyck Advisory Group, a mercenary group that Amnesty International has since accused of atrocities against local civilians. According to the Mozambique newspaper O Pais, a South African Navy ship, the SAS Makhanda, is patrolling the Cabo Delgado coast and the Southern African Development Community’s (SADC) Mission in Mozambique (SAMIM) recently extended its deployment, which began in June 2021. The SAMIM mission is composed of troops from eight regional countries fighting alongside the Mozambican armed forces and a contingent from Rwanda.

The introduction of a regional military coalition to the conflict raises concerns that weapons belonging to SADC forces will inevitably fall into the hands of ISIS-M and prolong the war, evoking fears about loose weapons exacerbating instability in places like Libya and Syria. As Mozambique has increased defense spending, ISIS-M has recovered military hardware on the battlefield and forced the withdrawal of newly acquired Mi-17 and Mi-24 helicopters during the attack on Palma.

In March 2021, the US State Department designated ISIS-M as a foreign terrorist organization. Shortly afterward, a US Green Beret detachment was sent to train Mozambican marines. In August, US Secretary of State Antony J. Blinken designated Bonomade Machude Omar as a specially designated global terrorist. Omar is an ISIS-M commander responsible for the attack on the Amarula Hotel in Palma, which indefinitely halted the Total gas extraction project. On March 1, 2022, the State Department designated four ISIS and ISIS-Mozambique financial facilitators in South Africa in an attempt to disrupt ISIS-M supporters.

The Economics of Instability and US Interests

In May 2021, Mozambique’s ambassador to the United States, Carlos dos Santos, described the discovery of vast natural gas reserves as an economic game-changer for the region and the continent. Dos Santos insisted that Cabo Delgado would become Mozambique’s “new global province of natural gas.” So far, however, this optimism has not been realized. Mozambique does not have the military resources necessary to defeat this insurgency unilaterally, and 2021 saw an increase in US security assistance to Mozambique.

According to a 2021 Congressional Research Service report articulating US interests, the instability in Cabo Delgado impacts a $4.7 billion US Export-Import Bank loan for the Total project and up to $1.5 billion in US International Development Finance Corporation political risk insurance for a planned ExxonMobil-led gas project. A range of US foreign aid and security cooperation programs aim to build security force capacity, foster economic development, and counter violent extremism. Some of this aid is separate from broader, non-insurgency-specific US bilateral assistance worth an estimated $536 million in fiscal year 2021.

The US State Department’s designation of Omar as a specially designated global terrorist will help the United States disrupt ISIS-M’s finances. But the insurgency’s networked illicit financing will require close partnerships across agencies and among allies to degrade the capacity to fund operations. The United States could also lean on the global coalition it formed in 2014 with eighty-three partner governments and institutions to defeat ISIS. Once ISIS is dislodged from Cabo Delgado, the United States could provide Mozambique with stabilization assistance, as it did in liberated parts of Iraq and Syria, to prevent the group’s reemergence.

The Entanglement of Security and Economic Stability

The Cabo Delgado conflict has rapidly progressed. What began as a localized insurgency involving foreign mercenary groups has now led to the emergence of an ISIS affiliate that has successfully disrupted critical global resource markets—at a time when much of the world is in dire need of additional natural gas supplies. As the US government moves to protect investments and counter ISIS, it needs to understand the root causes of this conflict to respond effectively. At its core, this conflict is a backlash against the exploitation of private resource contracts by a corrupt central government.

Critics of US military assistance to Mozambique, such as the analyst Steven Leach, argue that the Biden administration should withdraw the Green Berets to reduce the perception that Mozambique is merely the latest US battleground against an ISIS affiliate. Leach advises prioritizing diplomacy and targeted development to address the root causes of the conflict.

But the humanitarian disaster unleashed by the conflict cannot be addressed through diplomacy alone. The presence of US special operations forces in Mozambique allows the United States to establish military partnerships as part of a diplomatic campaign to influence the government as its partner of choice. Ultimately, great power competition in Africa hinges on the United States’ ability to be a reliable partner to African governments as conflicts over resources continue to break out across the continent. The United States will not be able to bring peace to Cabo Delgado on its own. But it can help its local partners repel a brutal insurgency. And it can push the Mozambican government to make the domestic reforms necessary to prevent the outbreak of future violence in one of the continent’s most neglected and resource-rich regions.

Dr. José de Arimatéia da Cruz is Professor of International Relations and Comparative Politics at Georgia Southern University and a Research Associate of the Brazil Research Unit at the Council on Hemispheric Affairs in Washington, D.C..