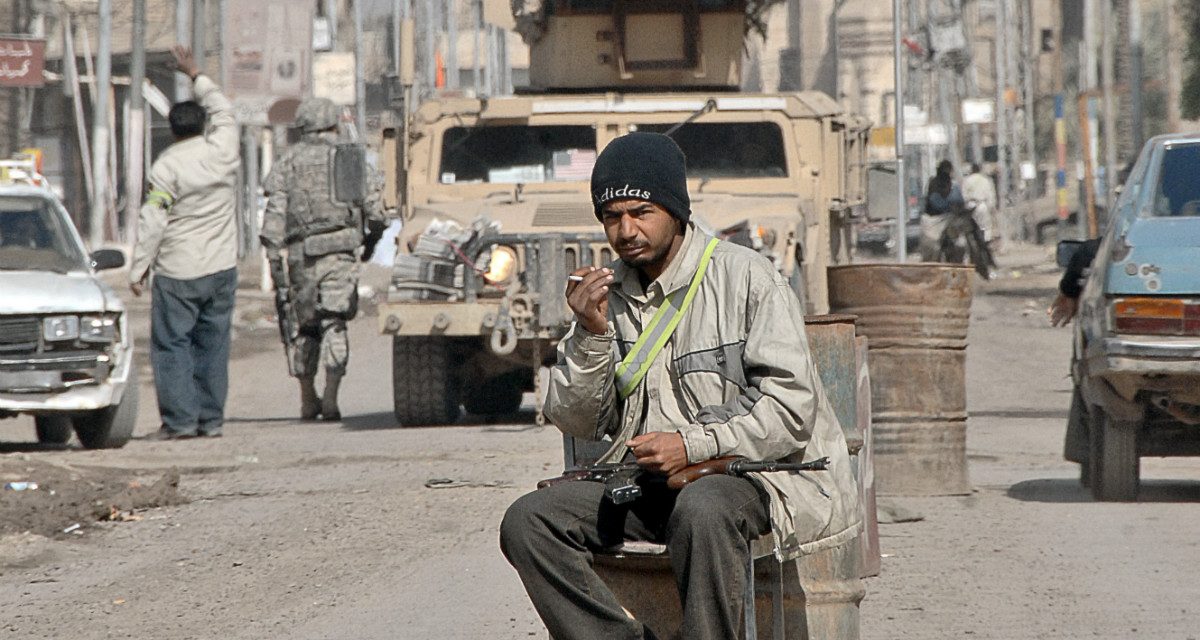 I passed a checkpoint manned by a group of young men armed with assault rifles. But they weren’t like the Iraqi soldiers at other checkpoints. They didn’t really wear uniforms, their bearing was distinctly un-military, and they looked mean. These guys are shady, I thought. One of them—the leader—sat at a plastic table in front of a small coffee shop working to open pistachio nuts, slowly and methodically, almost like a grazing cow, yet still exuding extreme power. On the table lay a brand-new black Glock 9-millimeter pistol and a pile of saliva-soaked shells. He was dressed in a purple Adidas jumpsuit, which he probably chose because it was the standard apparel militia members and criminals in Baghdad, but also perhaps because it covered his large belly comfortably. Between the sinister-looking checkpoint guards and their leader, I couldn’t have imagined a scene more reminiscent of a gangster movie if I had tried. But this wasn’t a movie, and he wasn’t Tony Soprano. His name was Ahmed, and he and others like him were in many ways the hope of the US military in Iraq.

It was 2008 and I was an Army infantry company commander charged with creating lasting security, governance, and stability in three neighborhoods of Baghdad containing more than seventy-five thousand residents. Ahmed was one of my five local strongmen that had the power to bring together and, more importantly, command small bands of men to stand checkpoint duties at every entrance in and out of the separate neighborhoods. In total there were thirteen checkpoints, each manned with roughly ten local men called “Sons of Iraq” by Iraqi and US officials. The ten men were split into three shifts for twenty-four-hour coverage. We armed them with AK-47 assault rifles, ammunition, and radios.

These checkpoint guards were supposed to stop and search any vehicles coming into each of the different neighborhoods. We weren’t foolish. We knew they only searched cars while we were visiting the checkpoints. But the guards still served an important purpose: they maintained a degree of justice and order at the neighborhood level. They also kept outsiders out, something they could do easily and far better than US forces or even formal Iraqi security forces, with their far more intimate knowledge of who belonged and who did not.

I went to visit these men almost every day. At the time, the leaders seemed like five mob bosses. Even reflecting on it many times in the years since, I can think of no better way to describe them. When I first met each of the mob bosses, I had definite reservations. They exuded power and demonstrated a clear apathy toward legitimate law and order. And yet, they provided a certain guarantee of this law and order, and most importantly, of security—even if they did so only out of self-interest. During my visits with them I witnessed the true local power structure. I listened to reports of bad men operating in other neighborhoods, but I also received real information on insurgents that could be submitted to my higher headquarters for action. These five men were also part of a broader network of shady individuals across Baghdad that gave us information when it benefited them.

I didn’t fear them, but let’s just say if I came across any of them in any other context, I would know to keep my distance. We knew they were bad. But the mission was to provide lasting security and stability, and these men could do that.

Every month, I would go meet the leaders and hand over the money for the guards’ monthly salaries, in US currency: three crisp hundred-dollar bills per guard. The leaders would, of course, take their cut of the salaries and distribute the money as they saw fit. At one point, my higher headquarters attempted to bypass that working system by having me and my soldiers run pay days and hand $300 to each checkpoint guard directly. We received reports that the guards left us and went straight to the bosses to submit their required cuts.

I also frequently visited the police stations—ostensibly the legitimate guarantors of order in the three neighborhoods my company was responsible for. But police in Iraq aren’t like American police. They don’t patrol neighborhoods. They expected locals to come to them to report a problem. They also knew that what went on in each neighborhood was managed by the local strongman. If they had a low-level problem, I even saw them go to these bosses for resolution.

At the height of the American “surge” in Iraq, the US military employed more than a hundred thousand Sons of Iraq. Their origin story is usually told by pointing to Anbar province, where Sunni tribal leaders became disenchanted with al-Qaeda’s heavy-handed treatment of their people and formed bands of loyal family members as an armed resistance against the group. This, combined with an increase in American forces, is credited with the lowering of sectarian violence to acceptable levels in the province. Initially dubbed “Concerned Local Citizens,” they were later given the more heroic-sounding Sons of Iraq label, and the model was replicated elsewhere in the country, ultimately leading to claims that these groups were pivotal to achieving success in Iraq.

This, however, was not the story of my Sons of Iraq. In the urban neighborhoods of Baghdad, traditional, tribal bases of power didn’t exert the same influence they did in Anbar. It was brute strength that earned power and gangs that exercised authority. I often asked the men on the checkpoints if they knew who their tribal leaders were. Without exception, they did not. But they feared the strongmen and respected the new lines of control that separated the different neighborhoods.

Not only were they not motivated by an emergent Iraqi national identity or a desire to shed the yoke of transnational terrorist groups. These hired guns were also not good guys. Many had attacked US soldiers for profit. One of the five leaders had served time for emplacing improvised explosive devices on roads to target American and Iraq security forces. I had more than one conversation with my soldiers who knew some of these men might have had blood on their hands. But now they worked for us, I had to explain. And we needed them.

The world is now more urban than rural—and that trend is continuing rapidly. The United Nations estimates that 180,000 people move to a city every day. This, combined with continued global population growth, is projected to add 2.5 billion people to the world’s urban population by 2050, mostly to the developing world. Unfortunately, some cities unable to handle rapid growth in the developing world—such as Lagos, Nigeria, for example—have more than 70 percent of their populations living in slums. Globally, over one billion of the world’s seven billion humans live in slums. Many of these areas have effectively become self-governed criminal safe havens, like the favelas of Rio de Janeiro.

While the world has become more urban, so has political violence, which is also now more prevalent in urban than rural areas. Guerrillas, revolutionaries, and terrorists increasingly choose to hide in urban terrain, where population density provides sanctuary from government observation and technology, access to millions for easy recruitment and use as human shields, and freedom to foment political dissent (often violently) against governments that struggle to provide even rudimentary services.

And yet, the US military knows little about alternative power structures in cities and undertakes little planning for how they can be leveraged, despite our recent history in Iraq of—let’s call it what it is—working with gangs. I have written extensively and critically about the US military’s lack of attention to urban environments. There isn’t a single US military command, think tank, school, or training site solely dedicated to understanding large cities. That’s a problem, but it isn’t just the traditional “military” challenges cities pose or their physical complexity that we need to more closely examine and prepare for. It is also how power is wielded, often informally, on their streets and among their people. That’s why Gen. Stephen Townsend said in 2018 that the US Army needs a way to understand power all the way down to the neighborhood level.

The US military has a history of trying to impose its power on cities—in Saigon, Panama City, Mogadishu, Kabul, and Baghdad, for instance—typically with mediocre results. This approach would almost certainly fail in any of the world’s more than thirty megacities, those with over ten million residents. The power structures of the world’s major cities are as diverse as the cities themselves.

Our military needs to be able to understand and work with both legitimate and illegitimate sources of power in urban areas. Just understanding host-nation political and military capabilities will not suffice. That might mean working with some unsavory characters, which is uncomfortable. But we needed those unsavory characters in Baghdad, and we will almost certainly need others elsewhere in the future to achieve objectives against insurgents, terrorists, transnational drug cartels, or any other belligerents threatening local security, regional stability, or US national-security interests.

It’s natural to have moral qualms about these types of partners. There are even legal considerations at play: the “Leahy law” prohibits the United States from providing funding to any unit of a security force that has committed a “gross violation of human rights.” But of course, this principally applies to formal military units. And in any case, there’s a whole host of distasteful criminal activities that fall short of the threshold specified by the law. The US Army and Marine Corps’ most current urban-operations doctrine recognizes that working with illegitimate power sources of questionable character is sometimes required. Still, it only includes one line pertaining to that possibility, which states that “in unique circumstances, commanders identify and interact with the leadership of criminal organizations.” The unique may very well become the routine on the future urban battlefield.

The five bosses and their crews manning checkpoints in the neighborhoods I was responsible for in Baghdad got results and increased security, so I had to accept that they were my partners. Soldiers in the future will need to do the same in order to accomplish US objectives. The world is moving to cities, and so is warfare. We need to adapt to that reality and prepare to leverage power, even in its illegitimate and criminal forms, in these complex operating environments.